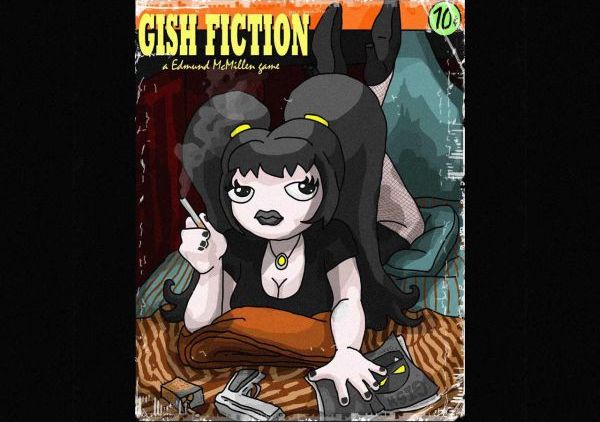 I usually prefer to begin an indie game review by spouting off some BS about "rooting for the underdog" or "always giving obscure titles a chance." However, such is not the case with Gish. What drew me to this game was its title, which reminded me of an old (pre-"Siamese Dream") Smashing Pumpkins album. I've always felt that the album "Gish" was an under-appreciated piece of music, and it bugs me when people refer to "Siamese Dream" as SP's debut album, ignoring "Gish" all together. In a way, it was as though the album and I had established a special bond that I thought would be further solidified by playing a video game that shared its name.

Unlike Smashing's lesser known debut, Gish is not an under-appreciated gem. It may seem so at first, what with its charming, indie-comic-like presentation and its sweet, jazzy soundtrack. Heck, I had the sassy sounds of world one's BGM stuck in my head for over a week. Even the game's fresh, physics-based mechanics promise an exciting experience, involving a bit of momentum, sloshing, and squishing. 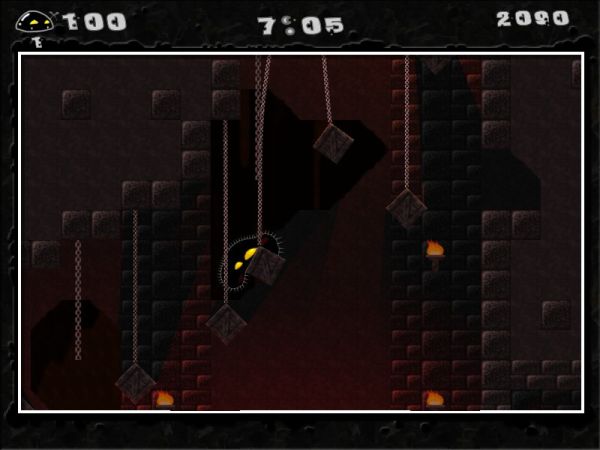 The titular character is actually an amorphous glob of tar out to rescue his lady friend from subterranean evil. As such, he can't deftly hop like Mario or put the screws to his foes like Ryu or Simon. Rather, controlling Gish requires some effort, especially when jumping. A single leap only grants him a barely noticeable lift off the ground. In order to bound higher, you have to repeatedly hop, pressing the space bar when Gish's body is fully compressed. A properly timed jump causes his body to suddenly expand, resulting in a higher ascent. This ability can be especially helpful when dealing with diagonal edges, as bouncing off of one launches Gish across wide ravines and killing pits.

Gish's list of techniques doesn't conclude with his vertical skills, though. The blob can also stick to surfaces, allowing him to scale walls and glide along ceilings. You can even reduce his viscosity, which allows him to slip into tight crevices and slide underneath crushing obstacles with ease. Better yet is his ability to solidify his body, allowing him to flatten the opposition or plow through breakable bits of environment. Suffice it to say that each segment puts you and your talents to the test, prompting you to ponder at each moment which skill best suits the sticky situation before you.

Gish is pretty unique in that respect. You can speed through its convoluted playgrounds of traps and obstacles, but doing so usually gets you killed at the drop of a dime. You need to be conscientious of Gish's movements when navigating the underground passages, and therein lies the problem... 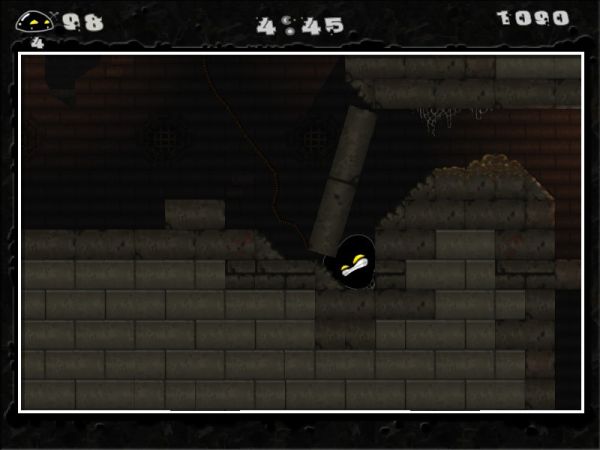 2D platformers benefit from at least a steady pace. Gish, unfortunately, demands you to properly time jumps and setup maneuvers so often that it can take eons to complete one stage. As you advance, scenarios become even more demanding and devious, and its up to you to complete them in a timely manner whilst remaining aware of your actions. One stage, for instance, requires you to leap from a ledge and cling to a ceiling, all in order to pass over a river of lava. There's also an enemy heading straight for you, so you don't have a terrible amount of time to setup a proper jump. Fail to time even one bounce properly when moving towards the ceiling and it's curtains for you. More often than not, I panicked during this scene and attempted to cling to the ceiling too early. Without sufficient height to my bounce, I typically plunged into the fiery brew. Needless to say, I died a lot during this scene. I also grew rather tired of having to stop and setup my leap, rather than immediately execute it.

There are also numerous scenes that revolve around negotiating tricky obstacles or platforms, which can sometimes take ages to surmount. One such event involves hopping from a series of dangling square blocks, each one pointed upward in a diamond shape. Take into account that you need to repeatedly bounce on the blocks in order to build up an effective jump, not to mention that Gish is constantly sliding off of them. To make matters worse, the blocks rarely hold still, and have a tendency to flail about the surrounding area. Unless you're a pro at this game, completing this segment should take you roughly thirty minutes to an hour.

Gish becomes super demanding as you delve further into its campaign. It regularly kills you for failure, forcing you to start take the level you're currently on from the top. To make matters worse, you have a finite number of lives, and each world consists of seven segments (five standard levels, a boss, and a bonus stage). Should you lose all of your lives before reaching the seventh stage, the game sends you back to the initial segment in the series. So if it takes you a few hours worth of playing to reach level 3-6 from 3-1 and you choke, you'll unfortunately recommence your adventure at 3-1. 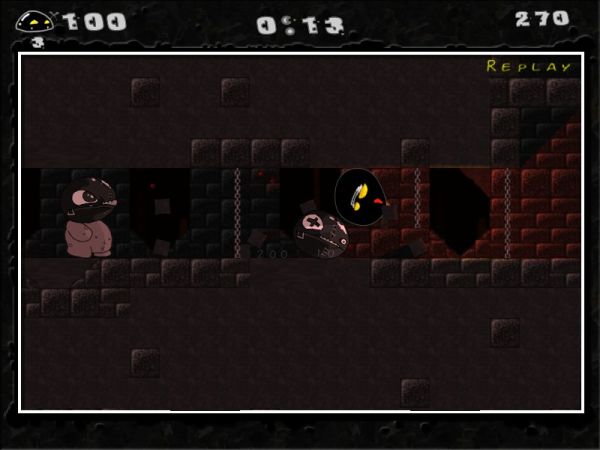 It doesn't help that the game does everything in its power to cheaply rob you lives. Now and then you'll have to plummet blindly, only to discover that there's a particular place you need to land in order to survive. I've fallen into more unexpected lava pits and beds of spikes than I can count. There are also several segments requiring Gish's "wall crawl" ability that can cause it to inexplicably falter, resulting (of course) in death. This usually occurs when angling around a corner. Taking the corner too quickly launches Gish off the ceiling, usually into a pit. Take it too slowly, though, and Gish will sit motionless on the ceiling, sometimes stretched around the corner. Finding a happy medium requires fussing with the controls, as well as a lot of backing up and reattempting the scenario. These aren't factors I should have to consider when playing a 2D platformer. As I mentioned earlier, they're usually more entertaining when the gameplay is snappy and intuitive, rather than needlessly complex.

Gish may be an original title, but "original" isn't necessarily synonymous with "good." The game's biggest drawback is that it's overcomplicated. Its pacing is rather slow, and its challenge factor is far too demanding and not forgiving enough. Bear in mind that this is coming from a man who loves Super Meat Boy, gushes over They Bleed Pixels, and can't get enough of Demon's Souls. Needless to say, I love me some hard games. With its cheapness and stringent nature, I wouldn't say that Gish is merely a difficult title; it's just a real prick.
1.5/5

If you enjoyed this Gish review, you're encouraged to discuss it with the author and with other members of the site's community. If you don't already have an HonestGamers account, you can sign up for one in a snap. Thank you for reading!

© 1998-2020 HonestGamers
None of the material contained within this site may be reproduced in any conceivable fashion without permission from the author(s) of said material. This site is not sponsored or endorsed by Nintendo, Sega, Sony, Microsoft, or any other such party. Gish is a registered trademark of its copyright holder. This site makes no claim to Gish, its characters, screenshots, artwork, music, or any intellectual property contained within. Opinions expressed on this site do not necessarily represent the opinion of site staff or sponsors. Staff and freelance reviews are typically written based on time spent with a retail review copy or review key for the game that is provided by its publisher.