Theres no reason why a game like Umbrella Corps cant work. Theres no reason why a capable development team shouldn't be able to take a multiplayer foundation, add zombies and lob in a load of Resident Evil franchise staples, then sit back and have a good time. It ought to be easy; there are dozens of good zombie games out there since the undead became trendy again, so why is it that Capcom struggles so much with this particular spin off? Because while theres no reason for game like Umbrella Corps not to work, it blatantly doesnt.

A lot of subtle clues could easily provoke any number of conspiracy theories, like the game's humble Unity engine beginnings, and the fact that the franchise moniker has been tellingly dropped from the game's title (despite remaining in tact for Survivor and proving that Capcom's marketing department has nearly no shame). If the end result feels like something a few people worked on quietly in the corner while everyone else was busy making the real games, thats because it probably was. What it wants to be is a 3v3 team-based deathmatch shooter that recreates iconic locations from the franchises backlog. The mansion, the police office, the village  they all return in one form or another, and you get to wage war in them. Dodgy, dodgy third-person war. Against other people, mind. Why would you want to shoot zombies in a Resident Evil game? How gauche! 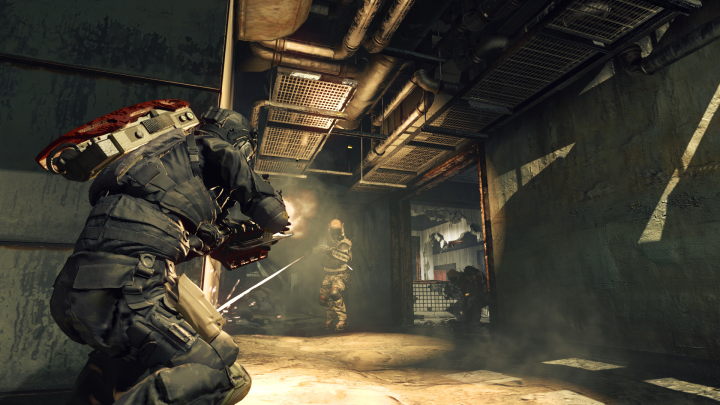 There are zombies around, though. That's something the camera seems very much aware of, given how tightly it wants to say close to you, the evil corporate mercenary with an assault weapon in hand. This approach makes the viewpoint uncomfortably limited. It can't provide the scope of vision preferably offered to someone who is trying not to get shot by three other people.

The woeful camera is one of the many, many beguiling quirks running roughshod through Umbrella Corps. There are numerous silly little design choices that make no sense at all, or that end up being outright detrimental rather than useful. Like how moving when lying prone is ridiculously quick, which leads to absurd games where members of both teams just slither around on their bellies like very well-armed snakes. I suppose its a better choice than trying to duck behind cover because, for a cover-based shooter, the game has a hard time trying to decide what counts as cover you can latch on to, and what doesnt. I say latch on to; odds are good that attempting to do something as complex as peek out and shoot at your enemies will detach you from said cover, making you an easy target. 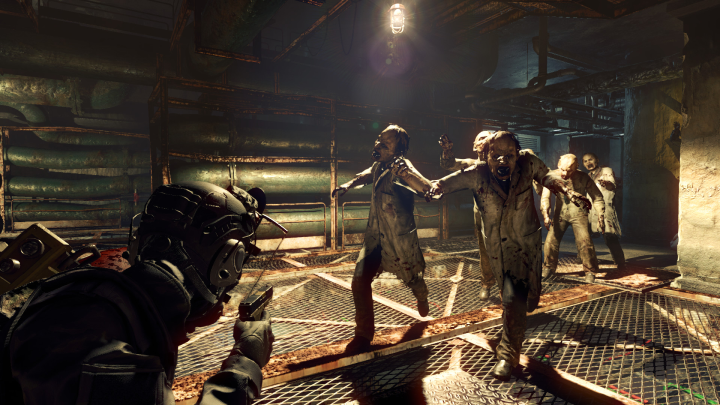 The only way to find joy in Umbrella Corps is to embrace the chaos of it all. One of the whopping two available multiplayer modes is Multi-mission, which takes a generous handful of preexisting deathmatch standards, then jams them awkwardly together. The other option, One Life is exactly what it sounds like: once youre gunned down, you dont respawn until the round is over. Instead, you are treated to a zoomed-out version of the map so that you can spectate the survivors efforts. Its all pretty hard to take seriously; the locations, dripping in nostalgia though they often do, are very squished in by arena standards. It wont take long before you wander into someone, even with the small team sizes. But, at the same time, most of the levels are riddled with air vents, handy sniper spots and seem to be several floors higher than what you'll find in most other games of this sort. Such differences do at least force you to change your deathmatch tactics that otherwise have probably served you well throughout the genre.

Another noteworthy quirk is the zombie jammer. Though the undead are present, they spend most of their time in a docile state, due to the device strapped to your back. You can, if you so choose, grab one up to use as a literal meat shield, but they dont offer a lot of protection. Their main use is to act like a kind of macabre window dressing, and they spend all their time standing around, rotting uselessly until the second a jammer is destroyed, at which point they become an unstoppable homicidal horde. For the most part, if youre able to snipe out a jammer, youre just as easily able to score a clean headshot. But wheres the fun in that? An agent with no jammer is a gory death scene waiting to happen. 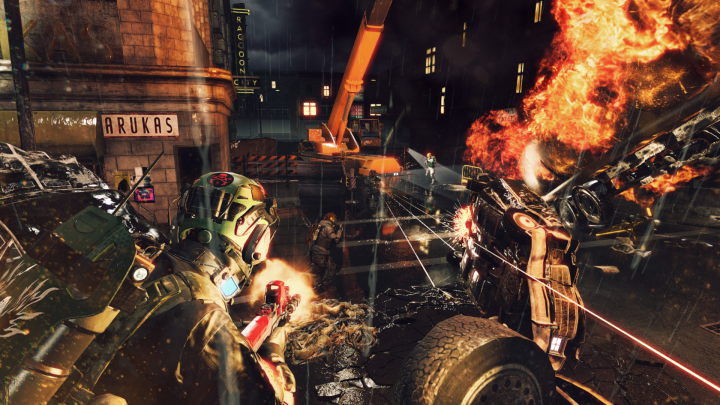 Theres something beautiful in counter-sniping someones jammer and seeing a flock of angry birds peck them to bits, or watching someone well dug in suddenly swarmed by the gnashing gatherings of the recently indifferent. Umbrella Corps' highlights are often things youve not seen before, because other games find them too dumb to include. Perhaps in an attempt to mock the early games loading screens, you have the option to open doors v-e-r-y s-l-o-w-l-y, which offers no tactical advantage, but can be amusing. And theres a pre-mission choice wheel that is primarily used to dole out tactics, but you can also use it to play little tunes or make a cat yelp in surprise.

In short doses, theres some enjoyment to be found in Umbrella Corps, assuming you find a like-minded player base ready to emerge itself in the sheer lunacy of it all. But the B-grade dumbness of it all soon wears thin, and whats left is a sparsely populated cover-based shooter that cant even grasp how to do cover right.

If you enjoyed this Umbrella Corps review, you're encouraged to discuss it with the author and with other members of the site's community. If you don't already have an HonestGamers account, you can sign up for one in a snap. Thank you for reading!

© 1998 - 2022 HonestGamers
None of the material contained within this site may be reproduced in any conceivable fashion without permission from the author(s) of said material. This site is not sponsored or endorsed by Nintendo, Sega, Sony, Microsoft, or any other such party. Umbrella Corps is a registered trademark of its copyright holder. This site makes no claim to Umbrella Corps, its characters, screenshots, artwork, music, or any intellectual property contained within. Opinions expressed on this site do not necessarily represent the opinion of site staff or sponsors. Staff and freelance reviews are typically written based on time spent with a retail review copy or review key for the game that is provided by its publisher.