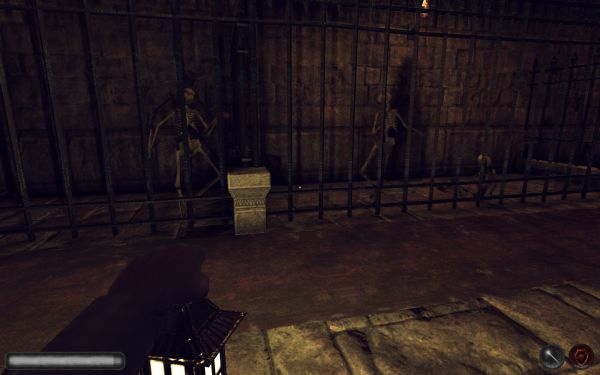 Spookiness is afoot in the first-person horror-adventure, UnderDread. You are scouring an abandoned castle, searching for your kidnapped daughter while tailing a detective and a madman who are leaving a trail of notes behind them. The campaign consists of four sections: a tutorial, two standard stages and an infuriating "epilogue."

Right off the bat, UnderDread scores a few victories. For one thing, its presentation captures the castle setting capably, by featuring dingy corridors, dilapidated chambers and malevolent specters. The grainy visuals and stage designs serve as a decent throwback to films composed of convoluted layouts like "The Legend of Hell House" and "The Devil's Nightmare." Best of all, UnderDread presents an actual challenge. I've toyed with numerous indie horror titles that consist of banal walking while the game throws eerie--albeit harmless--imagery at you, but UnderDread's threats are imposing and actually creepy. If you laze about or carelessly wander for too long, something will kill you gruesomely.

Chapter 2 places a firm emphasis on stealth. The stage pits you against a skeletal, multi-headed apparition who murders you on sight. If it spies you, it'll float toward you and initiate a "Game Over" animation that depicts you knelt on your hands and knees (while still in first-person perspective, mind) and bleeding out. By creeping behind walls or bookshelves, you can prevent such an unfortunate demise and wait while the abomination passes.

Given the ample number of such hiding places, you'd think sneaking through the castle would be a cinch. Sadly, that's not the case. I appreciate a fair challenge, but UnderDread's difficulty in chapter 2 comes as a result of faulty stealth elements. Some cover locations are considered inadequate for no apparent reason, while others are illogically effective. Consider this picture: 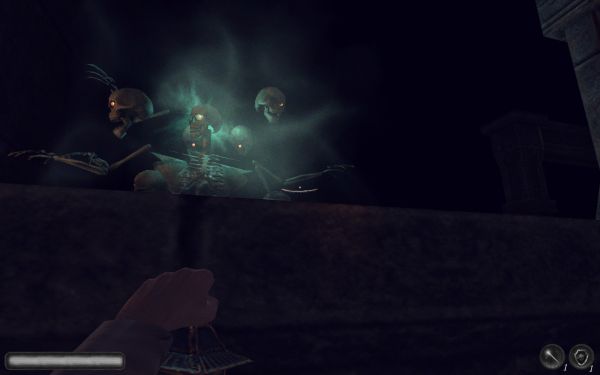 The phantom doesn't notice me in the above screenshot. He should, logic dictates, because I'm merely crouched behind a waist-height wall. Bear in mind that this isn't a hiding place I stumbled upon, either. Instead, this is where the game instructed me to hide during its stealth tutorial. Later on, I crouched behind a bookshelf--which I thought would be superior to the "official" camouflage shown above, since it conceals me more fully--and the creature easily spotted me. Not long after that, I heard the demon approaching and I hid behind a short wall similar to the pictured example, which sat adjacent to a solid stone wall. My foe noticed me before he even entered the room because he saw me through the flippin' stone wall. This happened multiple times, and in various locations.

Of course, you could use a ward spell to temporarily repel the wraith. Since these are finite in number, however, they're not totally reliable and also are best conserved for true emergencies. Not only that, but I feel that I shouldn't have to constantly exorcise the spirit in order to compensate for the game's lackluster stealth design.

I haven't even brought the pain yet, though. Chapter 2's quest line consists of collecting items as a means of overcoming obstacles or solve puzzles. In some cases, you only need a single event item, such as a statue or a gem. Other missions, though, feature veritable egg hunts for multiple sacrificial knives, holy water or potions. These objects arbitrarily spawn throughout the level, requiring you to backtrack through long hallways and previously visited troves--all whilst abiding broken stealth elements--in order to retrieve some of them. The experience quickly grows tedious.

You might also, as I did on numerous occasions, return to familiar locales to snatch gadgets. For instance, I nabbed the aforementioned statue, crawled slowly to its pedestal, then had to return to the bust's original location to grab a vial of holy water a short time later. No, I couldn't have grabbed it earlier in the stage. The protagonist apparently only thinks to take event items when they are of immediate use to him, and not a second before that.

Did I mention that checkpoints only crop up when you complete a puzzle? So if you spend ten to fifteen minutes traipsing through the castle, only to get screwed over by a buggy wall or a surprise attack, then you have to restart the collecting process.

Chapter 3 sends you through a mine tunnel, where you outrun an even creepier haunting. Occasionally, you'll hear disembodied weeping and glimpse a red light approaching. Corpses and dying miners materialize within the crimson glow, showing you a frozen image of the mine's horrifying past. Should the manifestation surround you, it's lights out. Worse yet, there's a toxic gas that sometimes follows the ghosting. Advancing through this segment mostly involves locating switches in a timely manner, so as not to succumb to either peril.

Though this section may be tough, it is doable. For one thing, you can avoid the malevolent spirit by ducking into the left side of the passage. Which side of the channel is considered "left" is vague, but thankfully I didn't need to utilize this function often. When doing so was necessary, I died regardless of where I stood. After some reloading and dumb luck, though, I eventually found the "sweet spot."

Too often, I'd spend lengthy stretches eluding the murderous phenomena, sure I would locate the next save point at any moment. Before I could, though, I'd trigger a glitch and go straight to "Magenta Hell." 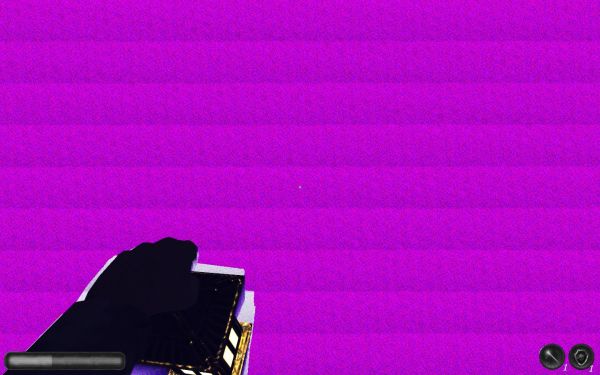 In other words, I had to reload my file after making satisfactory progress.

UnderDread features a boatload of minor offenses I could ramble on about, from corny hallucinations plagued by terrible animation (e.g. a jittery skull falling from the ceiling) to an inventory screen featuring a font so large that it's partially obscured by item placeholders. Never mind any of those qualms, though. What truly gets my goat is UnderDread's ending. The only thing that staved off the temptation to rage quit was the prospect of witnessing the game's denouement. Sadly, the campaign concludes with a cliffhanger. Tune in next week, same time and station. I endured UnderDread's arduous objectives and enraging bugs for naught.

Bottom line: UnderDread hits a few of the right notes, but is ultimately a glitchy, tedious wreck.
2/5

If you enjoyed this UnderDread review, you're encouraged to discuss it with the author and with other members of the site's community. If you don't already have an HonestGamers account, you can sign up for one in a snap. Thank you for reading!

© 1998-2021 HonestGamers
None of the material contained within this site may be reproduced in any conceivable fashion without permission from the author(s) of said material. This site is not sponsored or endorsed by Nintendo, Sega, Sony, Microsoft, or any other such party. UnderDread is a registered trademark of its copyright holder. This site makes no claim to UnderDread, its characters, screenshots, artwork, music, or any intellectual property contained within. Opinions expressed on this site do not necessarily represent the opinion of site staff or sponsors. Staff and freelance reviews are typically written based on time spent with a retail review copy or review key for the game that is provided by its publisher.