It would be very easy to label The Beard in the Mirror as a throwback to the early years of adventure gaming, so Ill do just that. The Beard in the Mirror is a throwback to the early years of adventure gaming, resplendent in its simple pixel graphics and dumb icon interface. It very much wants to roost among the classics, specifically Sierras seminal library. To this end, it offers you a points system that rewards you for extracurricular puzzle solving, and even provides a myriad of ways for your character to meet his humourous end. However, it is, after all, a modern game aping a classic, so rather than smugly kill you off and banish you back to your last save, it describes how you would have died before backtracking you to your poorly-made decision and hopes hindsight has provided you some wisdom. 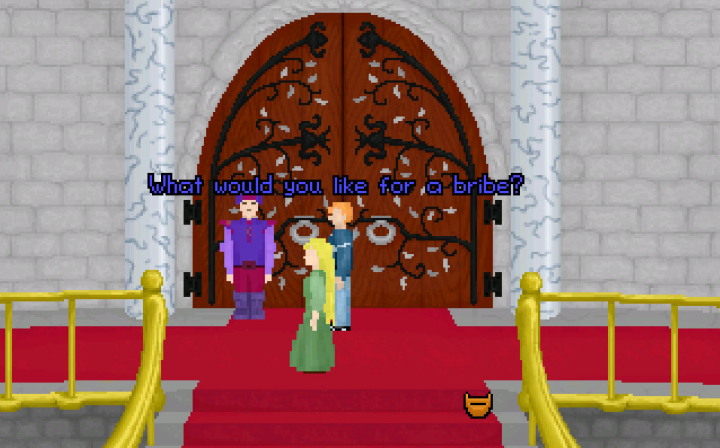 Its the story of Paul, an aimless twenty-something trying to find some direction in life after leaving home and graduating college. Hes awoken one morning by a strange girl at his bedside who claims to know him, but he holds no memory of. Distraught at not being recognised, the girl flees, and Paul chalks this night-time visit up as a particularly vivid dream. This mindset is challenged when he awakes and finds himself locked in his room. After ransacking the place to locate a key, he finds his bedroom door now leads to a forest path hes pretty certain wasnt there the morning before. Neither was the angry guy, waiting in ambush, who accuses Paul of numerous crimes he considers himself completely incapable of performing.

Paul doesnt remember the world hes forced to explore, but the world seems to remember him. The majority of the adventure is trying to make sense of that, and finding his place inside the chaos of it all. Though this sounds like quite a heavy task, Paul spends most of his journey unable to comprehend the weight of it all. Much of the game makes fun of his inability to treat his situation with the gravity it deserves. For example, when forced to ransack his room looking for a solution to the locked door, youll quickly find his favourite crowbar, spray-painted pink and lovingly adorned with a frilly bow. Youd think this the ideal tool for prying open his door and securing his freedom, but hes very attached to his crowbar and doesnt want to risk chipping the paintjob.

To the credit of the developer, theres a kind of absurdist humour running roughshod throughout. A local cobbler finds the idea that someone isnt interested in his exquisite wares so impossible, he takes disinterest in his goods as a genius bargaining ploy, and haggles himself into oblivion. Guards that show no interest in gatekeeping new areas behind routine fetch quests are cross-examined by Paul for not living up to the trope correctly. Its all pretty light-hearted, until the reasons Paul cant remember anything starts to become apparent wherein, well, its still pretty light-hearted. But theres certainly a shift in tone as the game processes; it never forgets that its a goofball at heart thats asking you to make your way through a foreign world, solving all of lifes problems with whatever rubbish youve managed to cram into your pockets, but it also never forgets how things started. With a mystery.

The Beard in the Mirror makes you work towards the answers youll find, but it doesnt drag them out. With around a four hour lifespan, its never going to compare in size with some of the goliaths of old, but it doesnt need to. It knows the story it wants to tell, and that story gets told. It fleshes out a world that shouldnt exist, finishing a fable that it never really starts and shunts Paul begrudgingly along into adulthood. It also provides three unique uses for vegan-produced vegetable-flavoured gumballs. Thats a remarkable achievement in itself.

If you enjoyed this The Beard in the Mirror review, you're encouraged to discuss it with the author and with other members of the site's community. If you don't already have an HonestGamers account, you can sign up for one in a snap. Thank you for reading!

© 1998 - 2022 HonestGamers
None of the material contained within this site may be reproduced in any conceivable fashion without permission from the author(s) of said material. This site is not sponsored or endorsed by Nintendo, Sega, Sony, Microsoft, or any other such party. The Beard in the Mirror is a registered trademark of its copyright holder. This site makes no claim to The Beard in the Mirror, its characters, screenshots, artwork, music, or any intellectual property contained within. Opinions expressed on this site do not necessarily represent the opinion of site staff or sponsors. Staff and freelance reviews are typically written based on time spent with a retail review copy or review key for the game that is provided by its publisher.