Let me take you back to the past, the year 1996 to be more precise. At that time FMV games were all the rage, even if they took an absurd amount of space when compared to other games of the era. One in particular took space of biblical proportions, spanning over 7 CD's.

That game was Phantasmagoria.

Long-time adventure pioneers, Sierra, finally decided to get their share of the FMV cake and what better way to do it then by hiring Roberta Williams, the power behind their most popular franchise, King's Quest. Armed with current big fad and a game made entirely in front of the green screen, she decided nothing was scarier than live (borderline awful) actors.

In Phantasmagoria you play as Adrienne Delaney, an aspiring young writer who, together with her husband, Don, a professional photographer, buys an old mansion. But the one they purchase used to belong to a 19th century wizard called Zoltan. Zoltans old pad dripped with that authentic gothic look that she hoped would inspire her towards the novel she was writing. 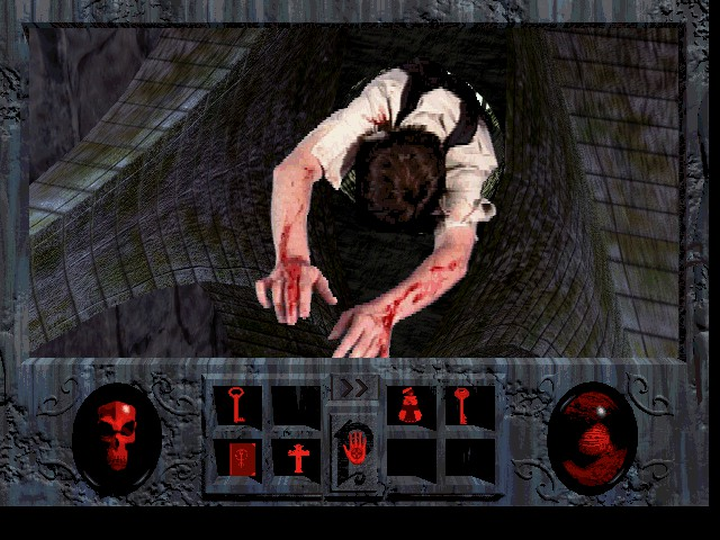 The couple move into the beautiful house, and Adrienne indeed manages to write a few paragraphs while exploring her new home. Wandering around the beautiful garden, poking about the vast interior, while enjoying the better sides of married life with Don. Like every person when presented to new surroundings, Adrienne wanted to know more about the house in which they settled.

As it turns out, this was not one of Adrienne's brightest ideas.

You see, it seems exploring gothic-looking mansions and opening various doors that were supposed to stay shut makes for a bad time. Especially if those doors seemingly lead to a chamber beneath a massive crucifix within the mansion's chapel. Why, such actions may unlock an ancient evil hidden within its walls and let it soar happily out, gleefully corrupting all it comes in contact with. For no apparent reason whatsoever. Evil gotta evil.

And this is a pretty odd thing with the game which can't seem to decide if it wants to be a subtle psychological horror or employ the tagline "SLAUGHTER IN THE MANSION: NOW WITH MORE XTREME BLOOOOOOODDDDDD! -- THE VIDEO GAME BY MICHAEL BAY". For instance, Adrienne receives odd, jumbled and slightly creepy messages on her laptop or, after discovering a certain object, shes cursed with a vision of the previous owner. It turns out Zoltan was not a particularly nice man. At all.

And just as youre getting into the game, thinking that the subtlety of the situation is pulled off pretty well, only highlighted by dribbles of gut-wrenching gore mixed in and helped along by the mansions unravelling mysteries, youre jarringly introduced to some new, "zany" characters. Like Cyrus the lummox with the IQ and acting chops of a lamp. Or Harriet, his "keeper" who obnoxiously exists only to get up to various shenanigans around the house, like getting stuck in a hole. Why? Screw you, that's why! 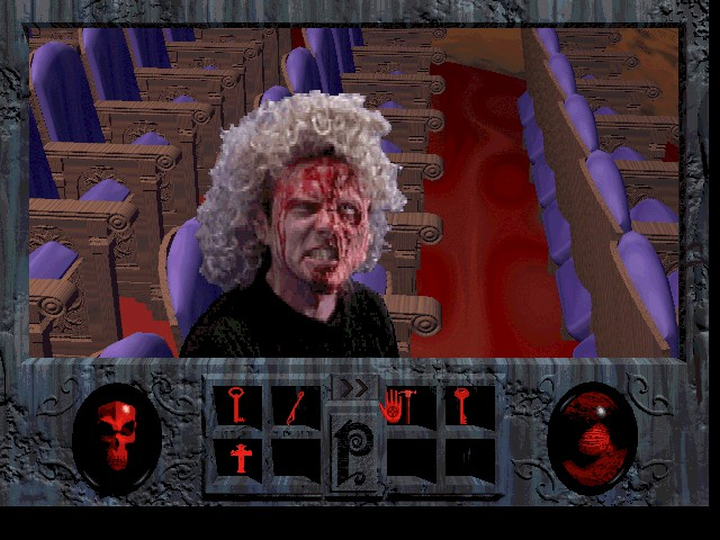 Or perhaps Don, who turns from a loving, likable husband into Chris Brown in the span of one day. Because the game had a distinct lack of douche-bags until now.

And this is just a smattering of the examples where the game can't decide whether to be a bloodbath, a thriller or a very questionable mix of the two.

The greatest problem with Phantasmagoria in the end is that it tries so damn hard to sabotage itself. Its length for the amount of space it takes is as laughable today as it was when it first came out. Despite spanning seven CD's and given a budget of four million dollars to work with, the game can be finished in one reasonable sitting, even if it stretches everything out with inane actions and pointless FMVs like using the toilet (Adrienne closes the door, how polite of her) or looking at senseless FMV scenes of Adrienne trying to open various doors or apply makeup. It doesnt help that the actual puzzles are almost insultingly easy which makes it all the more clear that Sierras big idea was to congratulate themselves with their use of new technology, throw in a pretty young girl splattered with liberal servings of gore and watch the money roll in. Perhaps this wouldnt have been so insultingly obvious if the game contained some actual substance. Instead, effort was ploughed into a clumsy hint system inexpertly slapped on top of a game already several shades too easy.

Maybe Sierra expected to find a completely new crowd, because this tactic explains a game they may not have expected well-versed adventurers to bother with -- hints will literally spell out the next step, telling stuck gamers complete answers like "Go to the shed" or "Something's different in the shed" rather than give them the chance to progress on their own, at their own speed. 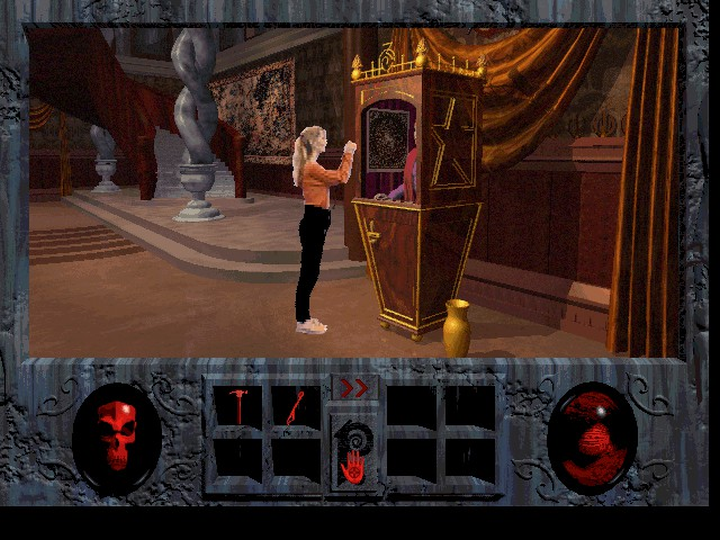 Its all the more a shame because Phantasmagoria is, at heart, not a terrible game. Overly simple, perhaps, and swinging far beneath its potential, but it still had some good ideas that were not often seen in adventure games of that time. For instance, to gain access to one area, you need to bring a sacred object. Here, you can opt for some rosary beads that you have easy access to, or perhaps travel into town to buy a cross which will serve just as well. The result is pretty much the same, but the idea of offering some semblance of freedom is nice.

Similarly, the quality of the FMVs for that era is top notch. The action scenes, as well as the ones that happen in "everyday life" are pulled off well, so long as the actors keep their mouth shut.

In the end, it depends. If you like FMV adventures and horror, you could do a lot worse than Phantasmagoria. While it doesn't deliver on its promises, at the very least you will spend a day laughing at poor actors and being surprised in the odd moment when the game absolutely nails something. These moments become more common as the game progresses -- the last chapter alone is enough to offer a cautious recommendation upon.

However, if you want a good Sierra FMV horror game that delivers on everything (while still having horrendous actors), try Gabriel Knight 2: The Beast Within.

If you enjoyed this Phantasmagoria review, you're encouraged to discuss it with the author and with other members of the site's community. If you don't already have an HonestGamers account, you can sign up for one in a snap. Thank you for reading!

© 1998 - 2022 HonestGamers
None of the material contained within this site may be reproduced in any conceivable fashion without permission from the author(s) of said material. This site is not sponsored or endorsed by Nintendo, Sega, Sony, Microsoft, or any other such party. Phantasmagoria is a registered trademark of its copyright holder. This site makes no claim to Phantasmagoria, its characters, screenshots, artwork, music, or any intellectual property contained within. Opinions expressed on this site do not necessarily represent the opinion of site staff or sponsors. Staff and freelance reviews are typically written based on time spent with a retail review copy or review key for the game that is provided by its publisher.