Most of my Super Mario Bros. accomplishments, including the one time I hadn't played in a few years and then busted out a perfect 32-level run, happened on a small television screen. That's a relevant factoid, because my current screen is somewhere between 68 and 70 inches. That size is great for sweeping vistas in The Legend of Zelda: Breath of the Wild or similar fare, but it's definitely at odds with my muscle memory (and any latency issues a wireless controller introduces certainly don't help). When I play the game more lately, I sometimes find myself jumping into pits or making other errors I simply wouldn't have made back in the day.

I mention this only because I've yet to finish better than fourth place in a round of Super Mario Bros. 35 and it's looking like that may never change. The game, a "battle royale" title that essentially combines Super Mario Bros. with a lot of the mechanics that made Tetris 99 so interesting, is free for now but will leave the Nintendo Switch Online service at the end of this month. That's a shame. 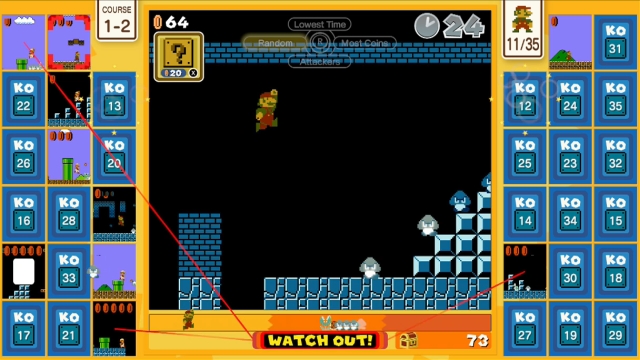 Super Mario Bros. on the NES featured 32 levels that by now are familiar to many of us who were gaming in the mid-80s through the early 90s. Many of us have cleared the game numerous times, because back then our options were much more limited. The truly dedicated among us mastered whatever games were available, even if it was our sister's copy of The Little Mermaid (which actually is a pretty good game, but I digress). The most beautiful thing about Super Mario Bros. is the way it changes up the rules so that our ample experience suddenly matters a great deal less and that familiar digital ground feels fresh again.

Unless you're practicing any courses you've unlocked (which are just stages, such as World 1-3 or 2-4 or whatever), or playing in a special event that changes up the rules, the way things work is that you start a round and are matched with 34 other players who will be your rivals. Your goal is to endure a gauntlet until finally you are the last plumber standing.

First you pick which course you would like to use as the start of your run. Me, I usually go with 1-1, but there are probably strategic advantages to using other ones. As you start playing from there, your view is positioned at the center of the screen and there are a bunch of tiny screens to the left and right that depict whatever progress other players make. Everyone is going at the same time, but you'll be too busy looking at your own adventures to give anyone else more than a passing glance. You don't try to run through the entirety of Super Mario Bros. as you remember it. Instead, you complete one stage at a time while grabbing coins and extending your timer. 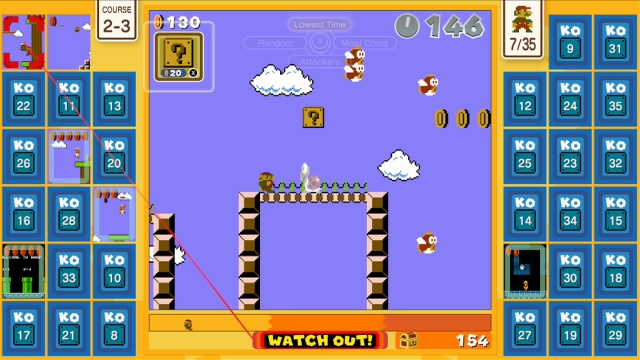 Every enemy you defeat adds seconds to your time remaining and populates the stage someone else is exploring. You can tilt the right analog stick in one direction or another to influence which rivals get to see the potentially lethal ghosts of any critters you slay. For example, you might choose whoever has grabbed the most coins. Depending on how things are going for them, this might be either a convenience or a massive nuisance. And of course, any other players who haven't been knocked out (by running out of time, by falling into a pit, or by taking damage as regular Mario), will direct the same love toward you.

The whole setup introduces strategy and an element of randomness to each run. As you grab coins, you can buy and almost immediately apply helpful power-ups, such as the all-important Fire Flower. Your coin total is a metric when it comes time to gawk at leaderboards. But you can't just go on a coin hunt while ignoring foes, because then you'll run out of time. Then again, grabbing enough coins could cause more players to target you and that might set you up with a string of enemies you can blow through while invincible to add dozens of seconds to your timer in an instant. 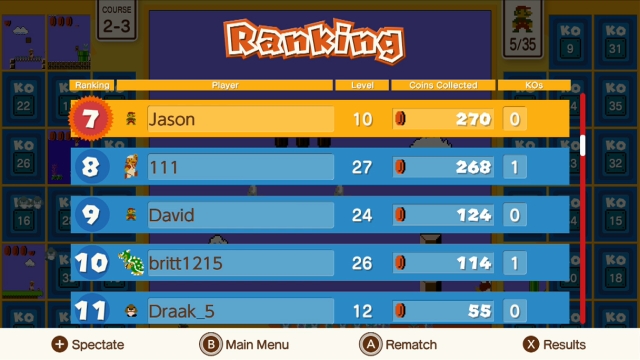 Almost every jump you attempt suddenly involves unknown risk. If you're running and taking a flying leap to the far side of a familiar gap, you might find an enemy waiting on the other side. That foe might not even be something standard, like a Goomba. If your luck is especially bad, it could be Bowser himself, or a spiny foe. Remember: whatever your competition defeats will be determine the additional adversaries that flood your own world, especially if you have earned a target on your back. When it's down to the last few characters and everyone is blowing through stages and enemies like nobody's business, things get downright hectic. It's a symphony of destruction.

While I do like the game a lot when everything is running perfectly, the random nature and the choices other players make sometimes diminish my enjoyment. A lot of runs tend to recycle the same few stages from the first few worlds. Reaching a new stage you haven't yet explored is a thrill--even though technically, it should be familiar to you--but also intimidating because you don't know what to expect and you don't get to add it to your permanent mix of stages if you don't conquer it. I remember I started 4-2 for the first time and started across the series of gaps right near the start, then ran headlong into a virtual wall of enemies at the worst possible moment. End. Of. Run. 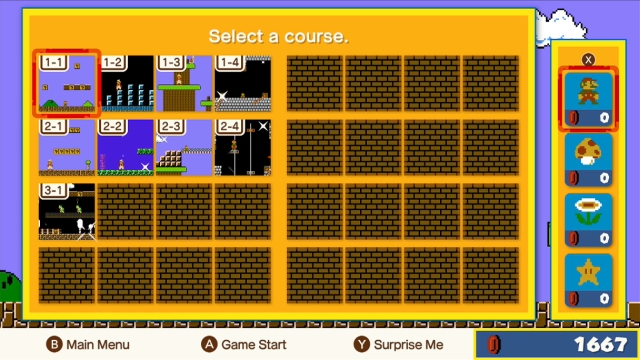 A little more variety in stages would have helped a lot, even though the familiar zones infrequently feel exactly the same. The Lost Levels, as it is known in Japan, could have provided fodder for twice the number of stages included here, and things might have really gotten bonkers for those who wanted to push themselves. But as things stand, there's not much incentive for players to veer outside their limited comfort zone. Those who get ambitious are just asking for trouble if they start making trickier jumps that each might lead to a spiny enemy or a Bowser on the far side. Playing things safe provides a tactical advantage that's difficult to overcome, and yet that approach may also foster fatigue.

Super Mario Bros. 35 has room for improvement, but the lack of breadth doesn't prevent it from offering a solid experience that serves as an intriguing new way to revisit a classic. The whole affair most assuredly deserves better than to disappear into our memories at the end of the month. If you have the means to conveniently access the game before its impending removal, make sure you jump on that opportunity so you too can experience the joy of plumber royale.
4/5

If you enjoyed this Super Mario Bros. 35 review, you're encouraged to discuss it with the author and with other members of the site's community. If you don't already have an HonestGamers account, you can sign up for one in a snap. Thank you for reading!

© 1998-2021 HonestGamers
None of the material contained within this site may be reproduced in any conceivable fashion without permission from the author(s) of said material. This site is not sponsored or endorsed by Nintendo, Sega, Sony, Microsoft, or any other such party. Super Mario Bros. 35 is a registered trademark of its copyright holder. This site makes no claim to Super Mario Bros. 35, its characters, screenshots, artwork, music, or any intellectual property contained within. Opinions expressed on this site do not necessarily represent the opinion of site staff or sponsors. Staff and freelance reviews are typically written based on time spent with a retail review copy or review key for the game that is provided by its publisher.