One Must Fall is a fighting game of particular note because, unlike every other good 2D fighting game, this one is made exclusively for personal computers. PCs are hardly bereft of one-on-one tourney fighters, but they usually consist of console ports. Especially when taken into consideration its time of release, when PCs were the strat nerds platform of choice and little else, such exclusivity was borderline unique.

It all takes place in a future where fighting between people is outlawed. Or, at least, more stringently outlawed. But humans, being the savage creatures that we are, instead invent a sport in which contestants link their brains with huge scraps of robotic metal and beat the crap out of each other with swords, flails, claws or good old fashioned head bashing. This all occurs during a tournament called One Must Fall.

When you start your journey into this wonderful world, youre given a choice of modes in which you want to play. Perhaps you want do dig straight into the story mode from the bat. Grand; choose your pilot wisely because each and every single one of them is a unique individual with his/her pros and cons which will be drastically reflected in battle, no matter what robot you control. 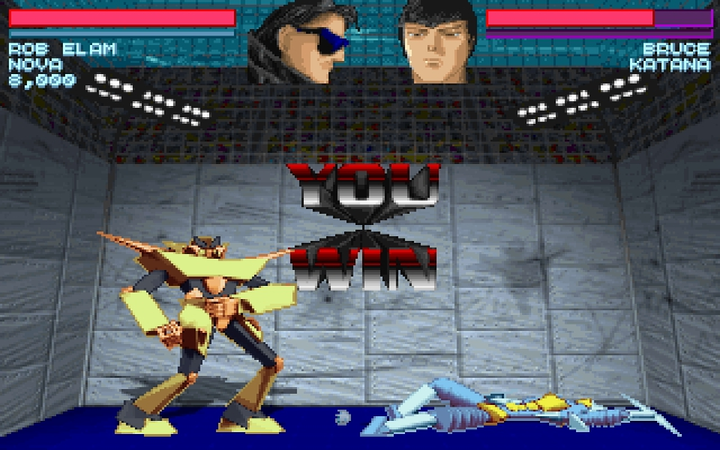 For instance, you might choose Milano, a young and fast pilot who makes even the heaviest robots move with speed that will defy all known laws of physics. However, should you decide to take him, be prepared to suffer for every single mistake you make because his endurance is abysmal. On the other side of the spectrum is Ibrahim, who is certainly not known for his lightning quick reflexes but he can take an abnormal amount of punishment allowing him to take his time in his retaliation efforts.

Once satisfied with the pilot its time to choose your robot, the «you» on the screen which will be used throughout the tournament until you reach the end. Either as a piece of junk ready to be scrapped or the champion of the world. Robots, much like pilots differ. For instance, Jaguar is a robot made for everyone because of its good balance of offense, defense and special moves, allowing even the most inexperienced to pilot it with a fair amount of skill. If you feel more advanced and want to see what you are really made of then there are robots like Chronos, who possess the possibility of stopping time. Or Pyro, whose flame throwers will make short work of anyone who makes the mistake of staying in one place for too long. Every robot has his fair share of unique special moves which need to be utilised to their maximum potential in the arena.

When the battles start, you will find that the movements of the robots look fluid and well-constructed (especially considering the era that the game was made in) and youll find that there are more ways to hurt and ultimately defeat your opponent than just hitting them. For instance, one of the arenas is shaped like a big cage, and through the walls on each side a powerful electric current runs that will stun any fighter. Utilise the move-set of your robots to slam the opponent in the wall and then unleash a powerful combo that will smash your puny opponent in a matter of seconds with the satisfying squeal of twisted steel. 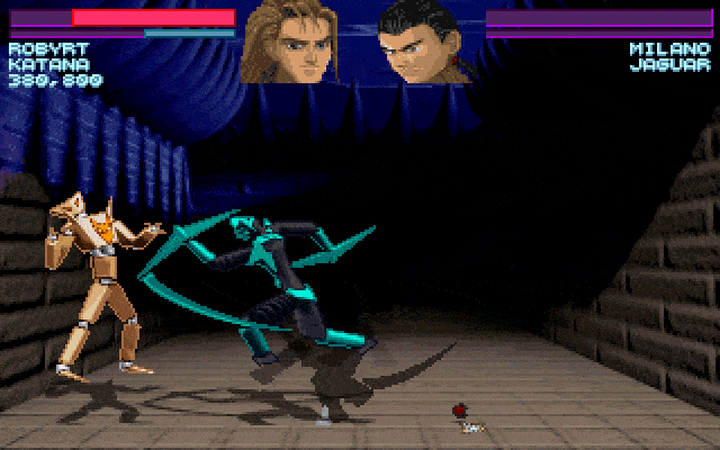 There are other options in the game, such as the ever present versus option to test your skill against a chum or the training mode where you can test your abilities against a stationary opponent and work on your combo abilities.

Finally, and most interestingly, theres the tournament option in which you, the player, have a completely different pilot then the ones present in the storyline mode and you will have to work your way upwards. Its a sort of career mode where you start at the bottom, fighting through rookie circuits with the worst robot output and fairly poor piloting skills, but as you fight onwards you earn fame, skills, and, most importantly, money which you can invest into buying new robots, or upgrading the capabilities of your juggernaut. Fare well and, by endgame, you will be grinding metal in the highest league.

In the end, one might ask if this game truly is worth the high marks Im about to award it. In my opinion, if this was a multi platform game that got as much hype as its console rivals and not a game that was released for a personal computer where all of the similar games are utter crap, then the answer would be no. However, as it is, this game is the best you can find in its platforms genre and it still has the same charm decades after it was released.
4/5

If you enjoyed this One Must Fall 2097 review, you're encouraged to discuss it with the author and with other members of the site's community. If you don't already have an HonestGamers account, you can sign up for one in a snap. Thank you for reading!

© 1998-2020 HonestGamers
None of the material contained within this site may be reproduced in any conceivable fashion without permission from the author(s) of said material. This site is not sponsored or endorsed by Nintendo, Sega, Sony, Microsoft, or any other such party. One Must Fall 2097 is a registered trademark of its copyright holder. This site makes no claim to One Must Fall 2097, its characters, screenshots, artwork, music, or any intellectual property contained within. Opinions expressed on this site do not necessarily represent the opinion of site staff or sponsors. Staff and freelance reviews are typically written based on time spent with a retail review copy or review key for the game that is provided by its publisher.