Sometimes, it can be difficult to recommend games to others because I have to take into account frivolous details such as how their tastes might differ from mine, so that super-fun game I correctly think is awesome might be deemed flawed or even mediocre by their unsophisticated selves. With South Park: The Stick of Truth, that job is pretty easy though. Just ask them if they like the TV show the game is derived from. If they answer affirmatively, they'll enjoy the game.

The Stick of Truth is a light role-playing experience that will likely only take 15 to 20 hours to complete, with every minute of that time saturated with references to episodes in the long-running cartoon series, as well as designing the graphics to look exactly like the show. To the degree that I could eschew actually reviewing the game and simply fill 1500 words or so with nothing but things I remembered from my years of being an avid fan of the show, whether it be the animal spirits imprisoned in Mr. Slave's intestines, the Underpants Gnomes, Terrance and Phillip (and their infinite supply of fart gags) or ManBearPig. 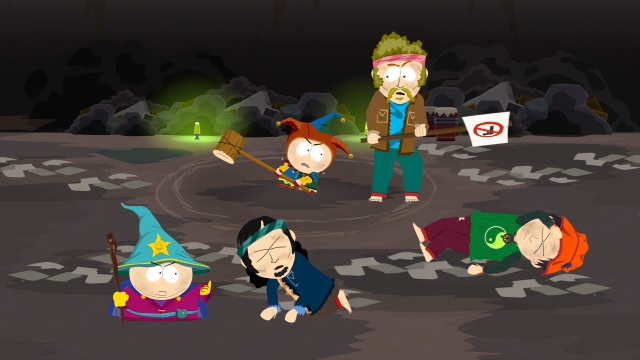 Fortunately, there is a quality game based around all this nostalgia, as South Park creators Trey Parker and Matt Stone enlisted Obsidian Entertainment to be their teammates on the project. You control a new kid in town, who's immediately booted from his family's new house in order to make some friends. Immediately after setting foot upon his street, you'll encounter Butters, who wastes no time in taking you to Cartman's house. The town's children are deeply embroiled in some high-stakes LARPing, with Cartman being the Grand Wizard of the Kingdom of Kupa Keep and at war with Kyle's army of Drow Elves. Cartman currently holds the advantage in the conflict, as he holds the titular Stick of Truth, allowing him to set any and all rules to the game.

While this constitutes "serious business" in the minds of the town's youth, other stuff is happening as well. As the first of the game's three days concludes, your character will be abducted by aliens. In the process of escaping their spaceship, you'll cause it to wreck in town, leading to governmental intervention. Before you know it, Nazi Zombies are walking the streets, while the government is planning to blow up the town. And, oh yeah, the Stick of Truth has found its way into the hands of a new, third faction that's determined to wipe out both Kupa Keep and the Drow Elves. Which, considering the subject matter, is probably your more pressing concern.

To partake in the boys' game, you'll walk all throughout the town while recruiting other groups of children to your cause. Or perhaps get recruited from Cartman's team to that of Stan. Regardless of whose side you're on, you'll be able to pick one of six cast members to be your teammate and, since this is an RPG, you'll obviously find yourself in combat throughout your adventure. Fortunately, these battles are more interactive than those found in the average game of this sort, based around all sorts of action commands that'll make your attacks more effective.

When it comes to normal attacks, whether by melee or projectile weapon, you'll simply need to tap a button when the it sparkles. Special attacks tend to be a bit more complicated to pull off properly, as you'll often need to either chain together button commands or wait for a prompt to tap or release a particular button. Sometimes, as with Kyle's Rain of Arrows, you'll cause a good amount of damage regardless of your success implementing the attack, but you'll often find it necessary to actually learn how to properly do the moves. 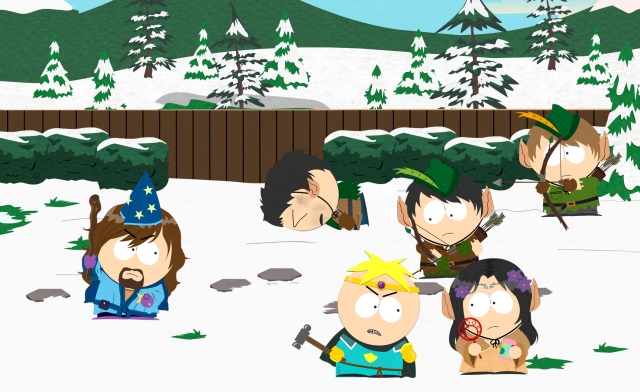 Especially when it's your character attacking. At the game's beginning, you'll get to pick one of four classes -- Warrior, Mage, Thief or Jew -- each gaining its own unique abilities. Unlike those of your potential partners, your special attacks can be made more powerful by placing points received after gaining levels into them. As a Warrior, I found Bull Rush and Ground Stomp to be virtual game-breakers upon fully unlocking their powers. With the former, I was able to damage a single foe, decrease its defense, inflict a damaging status ailment and have the opportunity to immediately attack again to cause yet more damage. Ground Stomp was great for fighting multiple foes from the minute I gained it, as it caused a good bit of damage to any hostiles on the screen. After powering it up, though, it also lowered their attack power and, more importantly, would stun them for the duration of the turn. Since your side usually attacks first in a turn, being able to properly execute this attack, which is very easy to master, turns every single non-boss fight into a mere formality. Which is probably why it's the last power a Warrior gains.

Then again, the longer you play Stick of Truth, the more likely every fight will be a formality. This is a pretty easy game to begin with and it just gets easier and easier as you advance through the plot. Enemies are visible on the screen and will charge you when you get within range. If you can hit them with your weapon, you'll strike first; if not, they go first. If I had actual trouble with a regular encounter, it was likely because my opponent took initiative and was able to get enough of an early advantage that I had to break some shields or use projectile attacks to avoid their ripostes.

And as I progressed, that stuff essentially stopped mattering. The late-game katana I was able to buy from Jimbo and Ned's hunting shop was almost comically overpowered, my skills were devastating and the simple fact that I had a sidekick almost made fights unfair. Adding to my advantage, if I did find myself wounded, the game allows you to both use an item and attack during combat turns, so I could munch on a health restoring item and still trim thousands of points off the opposition's health before they could do anything in response. By talking to people and occasionally doing quests for them, you'll befriend them on Facebook, gaining perks for every few friends made. Perks that can give you impressive combat bonuses such as more health or the ability to do extra damage, making things even easier. I remember being challenged during the game's first day, but the second was fairly easy and the third barely offered any legitimate resistance.

The main challenge presented is to simply get through the town of South Park, finding a way to obtain all the treasure chests and other well-concealed items. Keys, either hidden in houses or received through quests, are necessary to enter various houses and garages. As you progress through the game, you'll receive a number of magical fart powers that not only deliver powerful attacks in combat, but can be used to remove various barricades. After advancing through the alien spaceship, you'll gain the ability to use a probe to teleport to various places, while the Underpants Gnomes will give you powder that shrinks you, giving access to yet more locations. Even your sidekicks get in the action, as they have special abilities that can help you progress past obstacles. Combat might not be difficult in this game, but if you want to explore every corner of Stick of Truth's world and find everything, you'll have to put in a fair share of work. 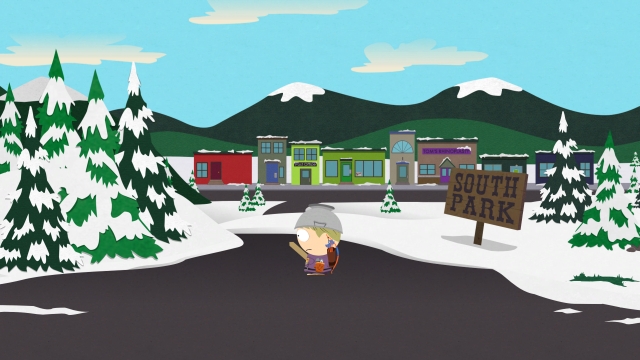 Even if you do take the time to thoroughly explore the town and surrounding countryside (complete with an eight-bit RPG take on Canada), this is still a pretty short game. While I've read complaints about that, I don't really see the fuss. Growing up, I routinely paid $50 or $60 for games I could complete in approximately the same 20 or so hours I spent with Stick of Truth. And, if you ask me, this game's simple combat scheme and lack of difficulty means it likely would have worn out its welcome if it lasted too much longer, regardless of how many fun South Park references are crammed into it. Sure, it'd have been nice if Officer Barbrady was given more than a cameo appearance, but I doubt I'd want to engage in an extra hour of repetitive, simple battling in order to justify his role being increased.

However, the game's current length felt just right. I was able to get into the game, get a lot of laughs and watch the final credits roll before I could get tired of it. A big part of that is because I did watch the TV show religiously for many years and am a big fan of Trey and Matt's brand of "nothing is sacred" off-color humor. And when it comes to recommending Stick of Truth, that is probably the only "make or break" factor, especially since they were allowed to go even more over-the-top without minor details like a television network regulating what they can and cannot broadcast interfering with their work. So, if you're the sort of weak-minded person who gets offended by abortion mini-games, traveling through semen-drenched colons or small children regularly swearing like sailors, this might not be a game for you. And to that thinking, my only response is "Screw you guys, I'm going home!".
4/5

If you enjoyed this South Park: The Stick of Truth review, you're encouraged to discuss it with the author and with other members of the site's community. If you don't already have an HonestGamers account, you can sign up for one in a snap. Thank you for reading!

© 1998-2020 HonestGamers
None of the material contained within this site may be reproduced in any conceivable fashion without permission from the author(s) of said material. This site is not sponsored or endorsed by Nintendo, Sega, Sony, Microsoft, or any other such party. South Park: The Stick of Truth is a registered trademark of its copyright holder. This site makes no claim to South Park: The Stick of Truth, its characters, screenshots, artwork, music, or any intellectual property contained within. Opinions expressed on this site do not necessarily represent the opinion of site staff or sponsors. Staff and freelance reviews are typically written based on time spent with a retail review copy or review key for the game that is provided by its publisher.