20XX, a new Switch port of the recent PC release of the same name, is a good game. It takes the classic Mega Man formula and throws a few wrenches in the works. The result is thoroughly playable and sometimes even great, but the developers' creativity occasionally gets in the way of a good time and the innovations are sometimes required to do heavier lifting than is ideal.

Mega Man 11 is on the horizon now, but there was a long period of time when all indications were that Capcom wouldn't bother to keep that franchise going, important though it was to many gamers of various ages. 20XX is one of several games that stepped in to fill the void, but it wasn't content to merely rehash the classic formula. Instead, it marries precise platforming and blasting segments with the concept of the rogue-like. In theory, the result should be an action-packed adventure that never has to end because it can provide something new each time you play it. In reality, fatigue sets in because there's not enough variety and because actual progression is so limited. 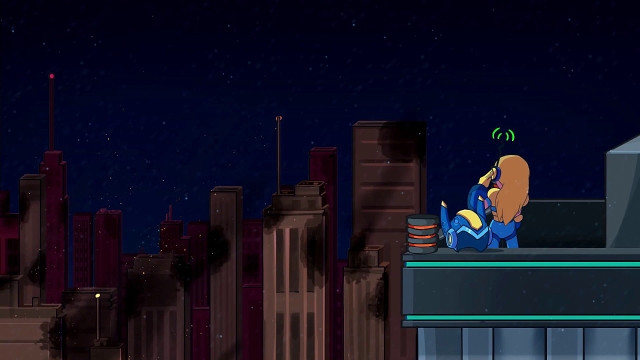 As the title suggests, the game takes place in the year 20XX. There's a cute little intro reminiscent of the opener to Mega Man 2, complete with a gray skyscraper adorned by square blue windows. You're then introduced to a brief tutorial that walks you through simple actions the robot heroes--one equipped with a blaster and the other with a wicked sword--can perform. Both heroes are able to jump, dash, and climb up walls, making them more reminiscent of X from the Mega Man X series than the original blue bomber. After clearing the tutorial, you are taken to the hub area where you can spend currency known as CP on permanent upgrades or temporary boosts. There also are portals that take you to events and let you attempt a "run."

A run is simply the opportunity to tackle a series of stages, defeating robot bosses of some renown at the end of each region. As a run begins, you are dropped in one of several environments and told to hunt down a boss. If you defeat that boss, you get some temporary upgrades and then you can typically choose one of three potential follow-up destinations. Stages grow increasingly difficult with each success, but you also should have heftier firepower and potentially a longer life meter and more special weapon energy. 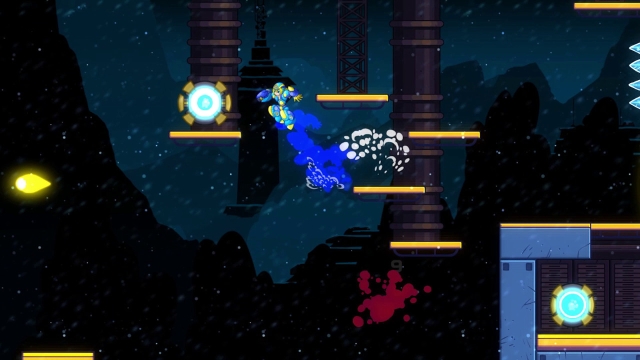 On the "Normal" difficulty setting, you are provided only one life. On the easier setting, you get a stock of three lives. When you lose your last life in either scenario, you return to square one, without the exciting but temporary upgrades you fought so hard to obtain. This is disheartening, to say the least, but standard for a rogue-like. The good news is that if you gathered some CP, you may be able to spend it to permanently upgrade a helper robot that appears with random prizes in some stages, or even to enhance your default life meter or similar. The unfortunate wrinkle is that you can spend only your CP bounty acquired on the most recent run. So if you gather 24 CP and you need 25 for that next upgrade you want, you're just plain out of luck. This rather punitive setup begins to feel like a flaw because the amount of CP required to purchase anything worthwhile quickly climbs to a point where it's extraordinarily difficult to make any progress at all with a given run. The developers presumably wanted to discourage players from essentially grinding the stages until they could be easily mastered, but they overcompensated.

This is probably the right time to mention that 20XX doesn't always offer the right sort of difficulty, either. Runs tend to be either too easy, like when you're battling boss monsters that often are too slow to pose much of a threat, or too difficult... like when you're attempting almost any stage after the first several. Falling into a bottomless pit isn't immediately fatal, but drains your life meter a bit. And replacement energy is often scarce. Worse, some stages feature extensive sequences where you're leaping from one platform to another, dodging enemies and environmental hazards that in some cases will push you into pits repeatedly. A moment or two of impatience can prematurely end a half-hour run. 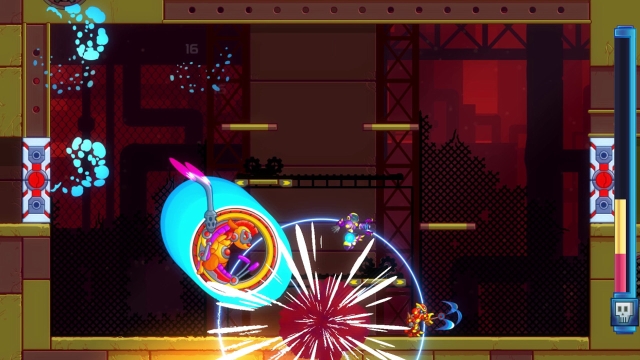 Another issue is that the stages don't feel sufficiently distinct. This is partly because there are only a few of them. One is ice-themed, with slippery ledges and penguins. Another finds you scaling a series of towers at dizzying heights. There also is a jungle-themed one, and another set in a lab. Oh, and there's one where there are furnaces and flames and such. If your run lasts long enough, you'll visit these destinations multiple times, to defeat different bosses. So if you play through several runs in an evening, you might play through the not-quite-same-but-almost-the-same stage ten or twenty times and not have anything to show for it. You can't even say that your practice has allowed you to memorize a stage so you can do better the next time around, because the layout will change slightly or significantly. What you do instead is develop improved aptitude for certain types of threat that you will probably see on dozens of future trips through a particular environment type. It's grinding, but without any of the rewards grinding usually offers.

There are some complications that mix things up a bit, so the repetition doesn't set in as quickly. For instance, you can find special pods in the various stages, which you can enter to find a miniature battle arena where you defeat a few waves of monsters to claim a prize. However, you can only enhance your character so much, even on an individual run. You can't get two helmet or armor upgrades at once. Instead, you have to choose the enhancement of each sort that you find most beneficial. This introduces a certain amount of strategy, which is for the best. 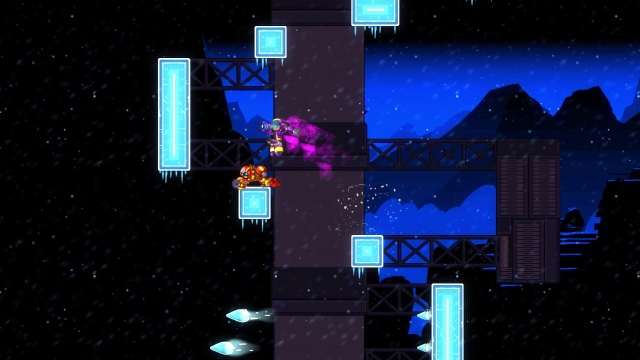 20XX does get several important elements very right, as well. The music is generally quite good. Though not as memorable as the best the Mega Man series and others have provided over the years, it's more than adequate. And the visuals are quite solid, immediately bringing to mind some of the better Capcom artwork from the Mega Man X franchise. The controls are also quite tight, so that you'll need only a brief period of adjustment if you're used to directing X through those older games. Though overly simple and predictable in most cases, the bosses you face are still fun to blast to bits, and a few of them can put up a decent fight if pressed. Then there are special events that follow different schedules (daily, weekly, etc.) to provide justification to keep returning.

A final point worth mentioning (and it could be a big deal indeed, depending on how you like to play your action games) is that 20XX features local and online multiplayer. You can cooperate with a friend on your runs, wreaking havoc together and potentially demolishing all of the evil robots in time for dinner. Then again, your partner could totally suck. That's the chance you take when trying to save the world with friends or strangers.

So 20XX is a good game, but not quite a triumph. It looks and sounds the part of an especially adept Mega Man clone, but it doesn't offer sufficient variety to stand shoulder-to-shoulder with Capcom's finest and its balance is iffy. If you're in the mood for more Mega Man-style action, though, and you rather prefer that everything not too closely resemble the obvious inspiration, you owe it to yourself to give the game a shot.
3.5/5

If you enjoyed this 20XX review, you're encouraged to discuss it with the author and with other members of the site's community. If you don't already have an HonestGamers account, you can sign up for one in a snap. Thank you for reading!

© 1998-2020 HonestGamers
None of the material contained within this site may be reproduced in any conceivable fashion without permission from the author(s) of said material. This site is not sponsored or endorsed by Nintendo, Sega, Sony, Microsoft, or any other such party. 20XX is a registered trademark of its copyright holder. This site makes no claim to 20XX, its characters, screenshots, artwork, music, or any intellectual property contained within. Opinions expressed on this site do not necessarily represent the opinion of site staff or sponsors. Staff and freelance reviews are typically written based on time spent with a retail review copy or review key for the game that is provided by its publisher.