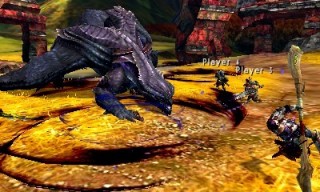 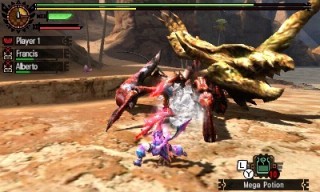 Monster Hunter is a famously all-or-nothing series; either you eat it up or it's totally not your thing. Based on that, as well as some words that I've exchanged with fans, I feel comfortable saying that if you're into the franchise, you already know that you're going to like Monster Hunter 4 Ultimate. This saves me from having to provide an expert's perspective, which is good, because this is my first serious go with the series.

I've put about 70 hours into MH4U, and I expect to spend dozens more with it. So obviously I've become a convert, but only after wading through countless tutorials, frequently consulting with series experts and going so far as to import an accessory from Japan to make the game easier to play (more on that in a minute). While I'm told that MH4U is more accessible than previous entries, getting into it is still a daunting task, and even now, there are numerous systems that I don't fully understand, nearly a dozen weapon types that I haven't mastered, and a wealth of post-campaign content that could probably more than double my playtime. It was worth the struggle, but Christ.

Forget all of that, though, because I can boil Monster Hunter's appeal down to two easily digestible words: boss battles. MH4U has about a thousand of them. It is, in fact, the driving force of the campaign. Occasionally you'll be sent out to fight lesser creatures, and occasionally you'll engage in minor fetch quests, but the bulk of the game has you tracking down and killing screen-filling bosses in multi-stage battles that typically offer fleeting moments of victory and defeat on both sides. There are several flavors of dragon. There are also giant insects, horned gorillas, rubbery birds, and countless others. They fly, they charge, they hang from ceilings, they enter rage mode and thrash about.

Nearly every major encounter in MH4U is a celebration of what I love about proper boss battles. There's the initial awe and intimidation of seeing this enormous, elaborately-designed creature for the first time. (Each boss has its own impressive introductory scene, the only time I would turn on the system's 3D function.) Then there's the process of learning the creature's patterns, getting smacked about and occasionally having to limp off to recover in a spot where your character can go through his or her slow-ass healing animation without being interrupted by a fireball. When you turn things around, progress is visible, because the bosses themselves also retreat when they're overwhelmed, running off to other areas, sleeping and sometimes snacking on smaller monsters. 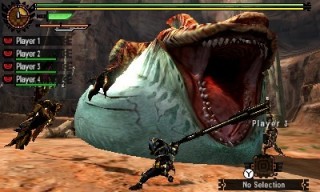 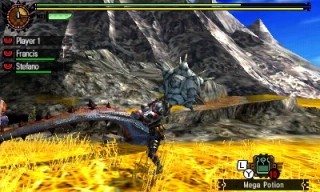 Your first time fighting a boss is always a sloppy affair, but your first time is never your only time. Sometimes you'll be tasked with fighting a more powerful version of that boss down the line. Sometimes another one will just show up and ruin your day while you're trying to do something unrelated. Sometimes you'll just choose to go back and fight it again, either because you had so much fun the first time or, more importantly, you need its body parts. That last one is the key. There's no traditional RPG leveling in MH4U, so your stats are based almost entirely on the equipment you're wearing, and the only useful weapons and armor are the ones forged from the remnants of slain beasts. Killing large creatures and wearing their carcasses is the game's central hook. It's how you get stronger, and it's got the added bonus of being a trophy showcase. All armor looks cool, and when you inevitably go online, your outfit is the reflection of something big and scary that you've learned how to kill efficiently.

The combat itself is an absolute pleasure, thanks to the many parallels it shares with another series that has recently taken hold of my life, Dark Souls. Movement in MH4U feels heavy and deliberate, to the extent that simply pointing your character in a new direction is a time-consuming activity that should be performed only with careful consideration, and there's a big emphasis on stamina consumption and not overexerting oneself. Stats are a constantly-changing factor: weapons go dull and must be sharpened, maximum stamina can decrease as your character grows fatigued, and environmental hazards can affect your performance. Enemies tend to have way fewer restrictions than you, as well, which means you'll often be spending more time on the defensive, only worrying about attacking when you feel that you can do so without major repercussions.

What I love about MH4U is that there are 14 weapon types, and each one results in a drastically different game. They control so uniquely that each one has its own dedicated tutorial sequence, and the game's opening hours will be spent simply taste-testing. You'll hate some of them, but you'll love a couple, or see potential in mastering a couple more, and that's all it takes. I started with the hammer, because its combos are relatively simple and the ability to charge attacks while moving came in useful. I eventually got bored with it, but it acted as a gateway to more complex weapon types that I initially found intimidating. MH4U's combat engine is so solid that I was actively looking for new, more effective, more rewarding ways to approach battles.

Conveniently, my two favorite weapons are the two new additions to MH4U. The first is the Charge Blade, a sword-and-shield combo that can morph into a single two-handed axe. The sword and shield can guard (some weapons can do that, while others can't) and it also used to absorb energy which is then discharged using the axe. But here's the thing: If the sword is overcharged, it becomes less effective, while the axe slows you down and essentially leaves you defenseless. So effective use of the weapon is a balancing act, building charge with the sword while looking for opportunities to unleash hell with the axe, often switching in mid-combo. 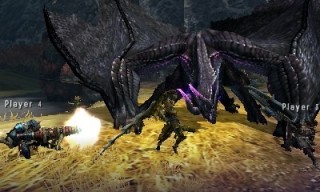 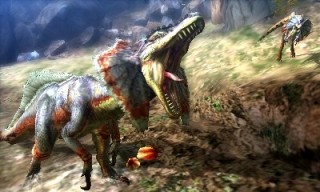 I got a couple dozen hours out of the Charge Blade, and then it was on to MH4U's most bizarre weapon, the Insect Glaive, a bladed device that can deploy a flying bug to extract nectars from enemies. Juices of different colors provide buffs for power, speed and defense, and they're drained from different body parts that vary from monster to monster. So when you're using the Insect Glaive, much of your time is spent scurrying about on the defensive while you're pulling nectar from different limbs: one drop from the wings, one from the tail, one from the head. The Glaive is also the only weapon with a jump function, which makes it an engine for the ever-useful mount attacks, usually only achieved by leaping from higher ledges (and thus very situational). I became a rodeo master with this thing. It was my party trick in multiplayer. Every weapon has a party trick.

And that's it, really. Put aside concerns about armor skills, Palico training and artifact furbishing; all of MH4U's systems are explained in due time or left for the hardcores to figure out, should they desire more out of MH4U than to simply reach a wave-goodbye cutscene. The appeal of this series is in exploring rich combat styles, mastering them, and applying them to terrifying situations that result in your character donning the flesh of his or her slain foes. Either the formula works for you or it doesn't, but if it does, MH4U has a thousand legs. I'm new to the series and I wound up dumping more than 70 hours into it over the course of about two weeks. I've averaged as much time with the game as many people spend earning a living.

Tragically, its most crippling flaw is hardware-related. MH4U is a 3DS exclusive, and the 3DS is simply not the optimal platform for such a demanding action game. Most immediately, the standard 3DS model doesn't have right analog functionality, which means that the camera system is a bit of a mess by default (particularly since MH4U's targeting system deliberately doesn't actively keep the camera on the selected enemy). A secondary d-pad on the touch screen can be used to pivot the camera, which works as well as you'd expect (i.e. poorly). My eventual solution was to simply buy the Circle Pad Pro attachment, which adds right analog to the 3DS. And the XL version of that accessory was never localized, meaning I had to import for the very first time in my life just to get MH4U playing well.

To be fair, MH4U is launching alongside the New 3DS, which has a right analog stick built in. If you're planning to buy one, I imagine that would work perfectly, but I can't wrap my mind around why a Wii U version of this game doesn't exist. It's worth noting that in addition to camera control, having right analog functionality is also vital for any ranged weapons, because good luck aiming those otherwise.

That'll likely serve as a baffling hurdle for any potential newcomers, which is a shame, because as a recent convert, I want Monster Hunter to break free from its inaccessible shell. It's absorbing, thrilling and sprawling, with some of the most life-affirming boss battles I've ever soldiered through, but if you're a fan, you already know that. I just hope that this account of my first major run with the series helps encourage other hopefuls to push themselves through the wall. If this particular brand of no-nonsense combat is to your liking, it's worth the struggle.
4.5/5

If you enjoyed this Monster Hunter 4 Ultimate review, you're encouraged to discuss it with the author and with other members of the site's community. If you don't already have an HonestGamers account, you can sign up for one in a snap. Thank you for reading!

© 1998-2020 HonestGamers
None of the material contained within this site may be reproduced in any conceivable fashion without permission from the author(s) of said material. This site is not sponsored or endorsed by Nintendo, Sega, Sony, Microsoft, or any other such party. Monster Hunter 4 Ultimate is a registered trademark of its copyright holder. This site makes no claim to Monster Hunter 4 Ultimate, its characters, screenshots, artwork, music, or any intellectual property contained within. Opinions expressed on this site do not necessarily represent the opinion of site staff or sponsors. Staff and freelance reviews are typically written based on time spent with a retail review copy or review key for the game that is provided by its publisher.