Playing yourself some Arkham Asylum, eh?, said some ornery fellow, spying on my Steam progress. Good of you finally fit it in a decade or so after the rest of us. Being the coolest kid on the block, I offered the instant message equivalent of a shrug; I was late to the party but it was part of a plan, I told him. Id sink an hour or so into it, long enough to say that Id given it a fair go, and then banish it to the forgotten corners of my library. My so-called friend scoffed. Get back to me in twenty hours or so when youre looking up YouTube guides on how to find the last few Riddler trophies and are getting your arse kicked by Poison Ivy. I quickly counter-scoffed. In comparison, his scoffing was made to look diminutive and foolhardy. He didnt know what true scoffing was; not until I was done with him.

So, as you can probably imagine, its been quite the climb down when, some twenty in-game hours later, Im looking up Youtube guides so I can find the Riddlers last few trophies. It had become very important to me. Hes extremely smug, you see, when you stumble across the first dozen or so solutions. He tells you that whatever you just found was an easy one, that even a moron could have solved that enigma. And maybe hes right; some of the trophies you have the option to hunt down sit in plain sight; some of the riddles youre asked to solve by discovering various prompts around the environment are ridiculously easy to spot. But they get harder; hidden away behind elevated vents or crumbling walls you might not currently own the hardware to bypass. Sitting, mockingly, behind shimmering energy gates you cant currently hack. Later, youll obtain grappling hooks that can tear down vents, explosive gel that can destroy walls and hacking devices you can use to bypass gates. If you care, you can go back and pick up all the things you had to leave behind. 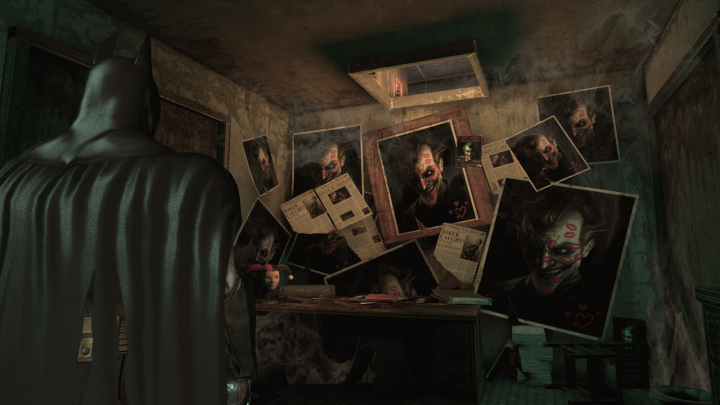 You can get some cool stuff for going out of your way and finding these things, like character bios, extra scenarios and audio reels of villain interviews. All worthwhile bonuses, but just bonuses nonetheless. I suppose it would be more fair to say that I spent an extra few hours retreading old ground and hunting these things down because of how progressively unhinged Riddler becomes the closer you crawl to 100% completion. His arrogant façade slipping with each fresh discovery, giving way to stuttering disbelief and, finally, snarling fury. It was important I threw all his uncouth nonsense about my supposed stupidity right back in his bony little face  even if his rage-filled accusations of how I must be cheating occasionally proved correct. That mattered to me, the need to topple someone who you never even see once in the entire game, who spites you purely through your comms link. But that wasnt the real reason, either; the truth was I just wanted an excuse to linger a little longer inside the walls of Arkham Asylum.

Arkham is far from a perfect game, but the entire adventure is so tightly constructed and brilliantly realised that the idea that youll eventually beat it and have to go back to living in a world without murderous henchmen to hang upside from interior gargoyles can be heartbreaking. Forgoing the open world meandering that might have been expected, asking you to flap around Gotham, chasing down a whos who of Batmans rogues gallery, youre instead expertly trapped inside the madhouse all the criminally insane super villains have routinely been dumped for decades. Under the ruse of returning Joker back to his comfy, padded cell, you find yourself trapped on an island filled with a plethora of really powerful nutjobs who are quite keen on killing you.

I think what really pulls it all together is just how hard Rocksteady invest in the Batman mythos. It could have easily been a ballsy brawler featuring exaggerated combos and onomatopoeic impact bubbles, but thats not all Batman is. So, sure, theres times when you need to take on a room of thugs or throw down with a super villain. But theres also times when you need to sneak around, taking out armed heavies one-by-one, retreating back into the shadows, allowing the survivors to slowly gag on their own fear. Other times, the game turns noir, allowing you the play the detective, hunting downs clues or picking up new leads. The island itself is a limited landscape, but Arkham tasks you with attacking it from different angles, often bathing it in a new sense of relevance. Sometimes you storm through a building; sometimes you have to sneak through. Now and then, you have to follow a trail of clues and sleuth through it instead. 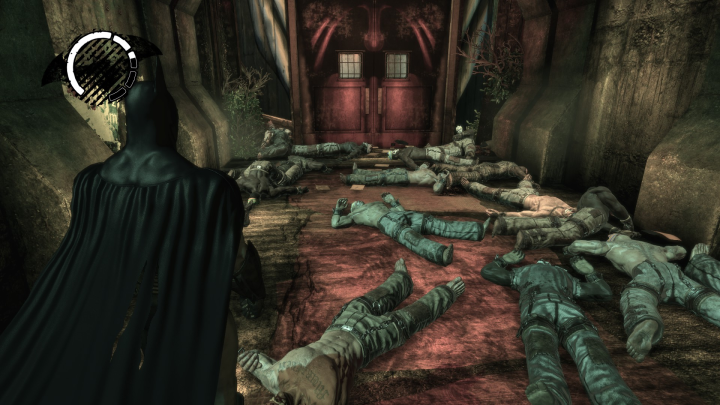 The same mindset extends throughout. Though Arkham hints at a much wider set of villains, it only features a small gathering of the bigger names (also: Zsasz). Fighting Bane is every bit the full on brawl you might be expecting, but others, such as Killer Croc, abuse their environment, having you sneak over unsecure wooden gangplanks across a sprawling sewer system. Kick up too much of a disturbance, and hell spring from the depths. Lob a trusty batarang at his electric collar to send him back down, or get chomped to death.

The star of the show is that bloody Scarecrow, though, who pops up at inconvenient moments to choke you with fear serum and highlight that Rocksteady have played Eternal Darkness at some point. The world shifts and changes, playing on Batmans greatest fears, before becoming a bizarre game of cat and mouse, inventively replacing one-on-one battles with 2.5D platforming and creeping insanity. Its only real because it feels real, the game tells you, before hitting you up with fake game over trolls and broken command prompts.

By the same parcel, I suppose the biggest let down is when, some twenty hours later, when youve finished trawling the levels for Riddler trophies, once Ivy and her giant sodding plants have been stomped, once youve come to terms with the fact that theres nothing left to do but confront Mark Hamill Joker, youre in for a hell of a set up, but a miserable execution. Arkham Asylum certainly deserves a better finale than you get, but perhaps that was the Jokers punchline all along. Always leave em wanting more, hes been known to say. Theres two sequels and a prequel to graduate to next, after all
4.5/5

If you enjoyed this Batman: Arkham Asylum review, you're encouraged to discuss it with the author and with other members of the site's community. If you don't already have an HonestGamers account, you can sign up for one in a snap. Thank you for reading!

© 1998-2021 HonestGamers
None of the material contained within this site may be reproduced in any conceivable fashion without permission from the author(s) of said material. This site is not sponsored or endorsed by Nintendo, Sega, Sony, Microsoft, or any other such party. Batman: Arkham Asylum is a registered trademark of its copyright holder. This site makes no claim to Batman: Arkham Asylum, its characters, screenshots, artwork, music, or any intellectual property contained within. Opinions expressed on this site do not necessarily represent the opinion of site staff or sponsors. Staff and freelance reviews are typically written based on time spent with a retail review copy or review key for the game that is provided by its publisher.