It's one of the most basic games in existence: single player Pong. You control a paddle that goes back and forth at the bottom of the screen to keep a ball from falling through. Since there's no opponent, instead you focus on using that ball to break bricks. Once you're done with all the bricks, you move on to the next level to give a feeling of accomplishment and progression, with the fact that you can design the bricks in various patterns providing some variety. There's not much more to it. There's not much you can do to screw this up. Or so I assumed. 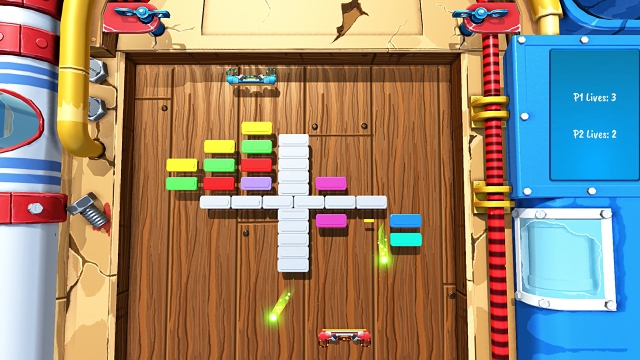 Seriously, allow me to explain. Brick breaker games could be mostly mindless, more reactionary (keeping yourself alive) than proactive (targeting specific blocks). To solve this issue, we often have control over the ball's angle as it bounces off of our paddle. Hit the ball near the edge of the paddle and it will move in a more horizontal (and often faster) direction; hit it in the center and it will be more vertical. You can even help change direction by aiming for the opposite end of the paddle. Does this make sense, physics wise? No, but it's more fun. Since the paddle moves in only one dimension, you have to make allowances. And being able to help aim your attacks while still primarily being reactionary puts a little extra risk into it for greater reward, and gives you more satisfaction when you smack the ball at just the right angle to break down a dozen bricks. It's the difference between simply staying alive and actually targeting the bricks.

Glaive: Brick Breaker doesn't do that.

The ball will simply bounce off the paddle at the same angle as if it were hitting the wall. OK, if you hit the ball at the very edge of the paddle, it will end up mostly horizontal, as the paddles are rounded at the edge. But mostly horizontal is aggravating anyway. Other than that, you have almost no control. I had control in Arkanoid on the SNES. I even had control on my old calculator back when I was a bored highschooler. But here, you are hitting the ball and hoping for the best. All reaction, very little pro-action. You're often relying entirely on luck.

Keep in mind that I didn't exactly buy this game to blow me away or to find a deep spiritual connection with it. It's a time waster, something to do for a few minutes or while otherwise engaged with something else. All you want is to have a decent time while wasting said time. But if you're getting frustrated by not being able to control things sufficiently, what's the point? Time wasters should be relaxing!

It goes a bit beyond that as well. Again, most brick breaking games kinda ignore physics, preferring user enjoyment over realism. Excessively horizontal or vertical angles aren't fun, either because it takes too long for anything to happen or the ball gets stuck in a rut. But in Glaive, both are perfectly acceptable, and both will happen far too often. I hope you enjoy sitting around watching a ball idly hit one wall, then the next rather than hitting bricks or your paddle. It's boring, it's easily preventable, yet still it is a part of this game.

Needless to say, I was disappointed. I'd go into more detail, but what more do you need? It's not fun when the angles are more conducive to slowing the game down than making progress, and there's no satisfaction in setting up a perfect shot when you have no control over your shots. It's a brick breaker game, what more is there to talk about?

And frankly, nothing more needs to be said about the game. It looks decent enough. There's a fair amount of variety (~200 levels spread across 3 different modes). You can play one stage at a time or an endless mode (ok fine, I'll nitpick: who decided that the "one stage at a time" mode should be called arcade? Isn't that the opposite of arcade?). You can even play multiplayer with one paddle on the ceiling! There's your standard and perhaps not so standard powerups (and power-downs) that can fall when bricks are destroyed, like changing the size of your paddle or giving you lasers or whatever. Some are even unique, like putting a repulser field around your paddle, or getting a single missile to produce massive damage in an area. I'll also give them props for the paddle on the ceiling idea, as some levels require you to keep away from both the top and bottom, controlling both paddles simultaneously. And some stages even have the bricks moving around! Or the fact that a charge meter fills up that, once activated, provides invincibility and turbo speed! Yeah, it's not mindblowing, but again, this is an absurdly basic concept. A few new twists are all you need.

But a game is not an average of multiple parts. This style of game lives and dies on the feel of the ball hitting the paddle, and Glaive: Brick Breaker falls short in that category. It doesn't matter that the rest of the game is perfectly acceptable or even clever in parts. I simply couldn't get past the feeling that I had no control over where the ball was going. What's the point of trying to destroy bricks if you are just reacting to the ball and hoping for the best? Maybe the developers were aiming for "realism", or maybe they thought that people wouldn't care about such details for such a basic, well-traveled game. But sadly, the opposite is the case, as the fact that this is such a basic game to begin with means it can't survive such a fatal flaw. All I wanted was to break bricks, yet I'm left unsatisfied.
2/5

If you enjoyed this Glaive: Brick Breaker review, you're encouraged to discuss it with the author and with other members of the site's community. If you don't already have an HonestGamers account, you can sign up for one in a snap. Thank you for reading!

© 1998-2020 HonestGamers
None of the material contained within this site may be reproduced in any conceivable fashion without permission from the author(s) of said material. This site is not sponsored or endorsed by Nintendo, Sega, Sony, Microsoft, or any other such party. Glaive: Brick Breaker is a registered trademark of its copyright holder. This site makes no claim to Glaive: Brick Breaker, its characters, screenshots, artwork, music, or any intellectual property contained within. Opinions expressed on this site do not necessarily represent the opinion of site staff or sponsors. Staff and freelance reviews are typically written based on time spent with a retail review copy or review key for the game that is provided by its publisher.