Every gamer has their own story of how they first became addicted to gaming. Mine happened when I was around ten years old. My dad installed Sim City 2000 on the family computer and one morning I started building a city, carefully laying down roads and powerlines and pipes. I watched my money rise and fall, using each new windfall to further expand my city. I watched my population rise. I remember being called away for dinner I wasnt even aware that I had been playing for about nine hours continuously.

Im older now, and I dont have as much time or energy for games. There will always be a place in my heart for the simulation genre, even if it requires a lot of time and experimentation to be good at it. No other simulation game captured my attention as well as Sim City 2000 did  its sequels fell a bit short in my estimation.

Cities: Skylines is the modern update to Sim City 2000 that Ive always wanted. Its a little more complex, but it eases you in gently. The maps contain pre-existing highways and railway lines, and its your job to connect your new city to that network. Your first town will be a few streets near a motorway exit, and youll learn how to manage electricity, water and roads very quickly. Most buildings must be placed next to a road. Your power plants must have water. Your water pumps must have power. If you forget this, your city will die before it even gets off the ground  and I have occasionally forgotten this, as I like to put my power plants away from where Im going to build my town. 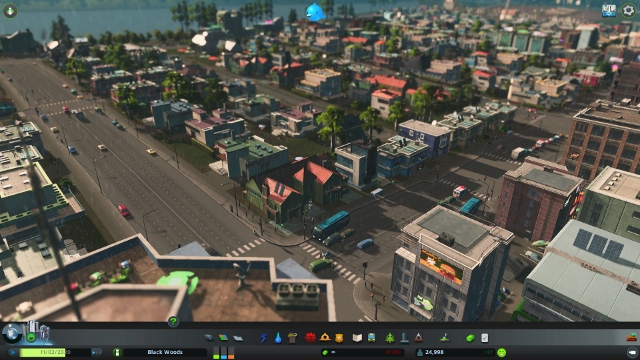 Youll then zone the land that is accessible by road. If youve played Sim City, youll be familiar with the zones: residential, commercial, industrial. I appreciated that they even used the same colour as Sim City. Each zone has either low or high density  so you can choose where you want houses or apartment blocks, and small shops or huge malls. One difference is that the industrial area is differentiated between factories and office buildings.

Your city will come alive before your eyes. You can zoom out and watch the city begin to fill, or you can zoom right in and watch construction crews at work on the buildings. I havent seen a game that has handled the transition between macro and micro view as well as this game. You can zoom out far enough that clouds can sometimes partially obscure your view (you can turn weather effects off if this bothers you), and you can zoom right in to see people moving about and cars driving along your streets, and you can click on any building or person to view information about them.

And you will start to notice traffic. Your first cities will likely be abandoned simply because of traffic congestion caused by poor planning. As your city grows, more and more cars will need to access your city. If you have intersections too close to each other, the traffic jams will become massive. If you zoom in, youll hear them blaring their horns at each other. If traffic comes to a complete stop, then essential services will have trouble reaching areas of your city. 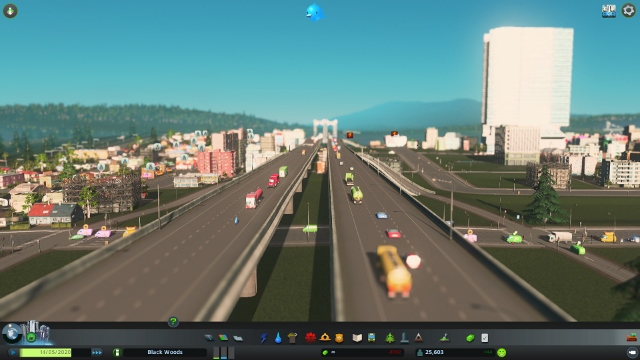 Cities: Skylines expects you to provide adequate education, police, fire and health protection. It also includes sanitation. At one point, my garbage trucks couldnt get through to my residential area, so I kept receiving reports of garbage piling up, which caused people to move out. Even more disturbing, some buildings had dead bodies in them, because the hearses from the cemetery couldnt get through the traffic.

Its all a learning experience. Each new city you make will be better thought out than the previous one. I will usually leave a row of empty blocks so I can run a train line through, or even extend the motorway through my city, so it can be serviced by additional exits, so the motorists dont crowd the main street. It also helps to put in a subway network or bus lines so that people will leave their cars at home.

Ive put nearly thirty hours into Cities: Skylines, but I feel Ive barely begun. Just this morning, I finally built a CBD that Im proud of. Land value is up; traffic flow is okay (there are a few trouble spots I need to work on). Ive decided to leave that city alone for a while, and build a new one somewhere else on the map. Cities: Skylines gives you a huge play area  this is one of the main draws it has over something like the most recent Sim City title. 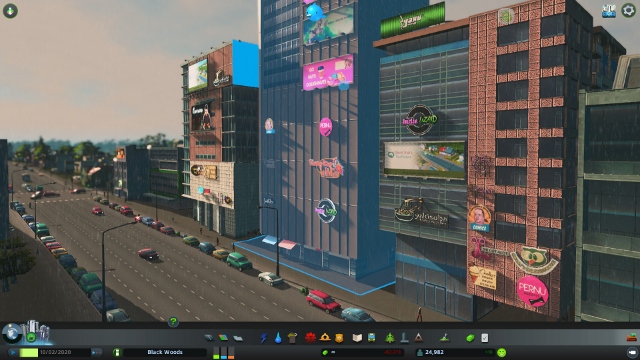 Once your city is making enough money, you can purchase additional neighbouring land, effectively doubling your building size. The base game lets you have a city of 9 blocks of land, but why stop there? If your computer is up to it (and youre looking at 16GB of ram), you can activate a pre-installed mod to let you purchase 25 blocks of land. In researching these numbers, I just learned that you can unlock up to 81 blocks of land! I am certainly going to try this. Another pre-installed mod lets you have unlimited money, allowing you to be more ambitious and creative with your cities, letting you see what works and what doesnt without bankrupting you.

Cities: Skylines has so many custom mods created by the community. You can download so many custom maps (often based on real locations), and buildings and vehicles your city is only limited by your imagination.

I feel like this game is a response to some of the subpar city simulators that have hit the market in the last five years or so. Colossal Order have put together such a polished title that allows us to build the cities of our dreams that are full of life and soul. Even if you never download anything from the workshop, there is still so much depth and variety that every time you zoom in, youll very likely see something you havent seen before.

And while I haven't lost a whole day to Cities: Skylines, it has certainly taken several hours that I hadn't intended to spend gaming.

If you enjoyed this Cities: Skylines review, you're encouraged to discuss it with the author and with other members of the site's community. If you don't already have an HonestGamers account, you can sign up for one in a snap. Thank you for reading!

© 1998-2020 HonestGamers
None of the material contained within this site may be reproduced in any conceivable fashion without permission from the author(s) of said material. This site is not sponsored or endorsed by Nintendo, Sega, Sony, Microsoft, or any other such party. Cities: Skylines is a registered trademark of its copyright holder. This site makes no claim to Cities: Skylines, its characters, screenshots, artwork, music, or any intellectual property contained within. Opinions expressed on this site do not necessarily represent the opinion of site staff or sponsors. Staff and freelance reviews are typically written based on time spent with a retail review copy or review key for the game that is provided by its publisher.