Flying Red Barrel is adorable before its anything, investing heavily in a carton aesthetic, bouncy, lively music and bright, vibrant colours. It looks simple, clean and accessible, never openly overcomplicating itself with genre norms like multiple bullet patterns, helper satellites or even basic weapon power-ups. What you start with is what you have to work with all game; a basic nose cannon and a refillable stock of missiles you need to earn by collecting shiny gold coins dropped by beaten foes. These missiles rack up massive damage, but theyre not the screen-clearing fare you may be used to; they need to be carefully aimed so not to go to waste. The goofy anime feel is cemented by a simple plot that plays out alongside the missions. Schoolgirl-aged pilot Marc (which is confirmed as 100% a girls name) is often chastised or mocked by foes always boasting significantly larger aircraft than she does. Youll probably catch some of it while trading shots, but it should be considered a mistake to do so. Despite its watershed visuals, its playful music and its oversimplified mechanics, Marcs war against sky pirates and evil inventors share a universal cute-em-up truth; its sadistically difficult.

Its completely unapologetic about the whole thing, too. You get three lives and three continues and if you cant beat the game with that, youll never beat it. Whereas some games take pity on their players and reward their grind with shiny new credits or a few extra lives, Flying Red Barrel gives you nothing! Instead, it demands you put the time in and invest in getting better while learning the best routes through the scattershot maze of enemy projectiles. It doesnt even really give you an easy setting -- of the three settings available even the lowest is a destroyer of lives. It makes up for this in a few ways, like having branching mission paths that can have you take on or avoid different mid-level boss fights depending on what you manage to explode or who you let fly away intact, but it doesnt advertise this. That Red Barrel continuously kicks my arse rarely bothers me. Because the fault is usually with me; I could have dodged but I was too slow, or I got greedy and took risks I should have avoided. Its this weird obsession it has with trying to keep all its best mechanics a secret that bothers me the most; to get the best of the game, you have to stumble across its most unique ideas by complete accident. 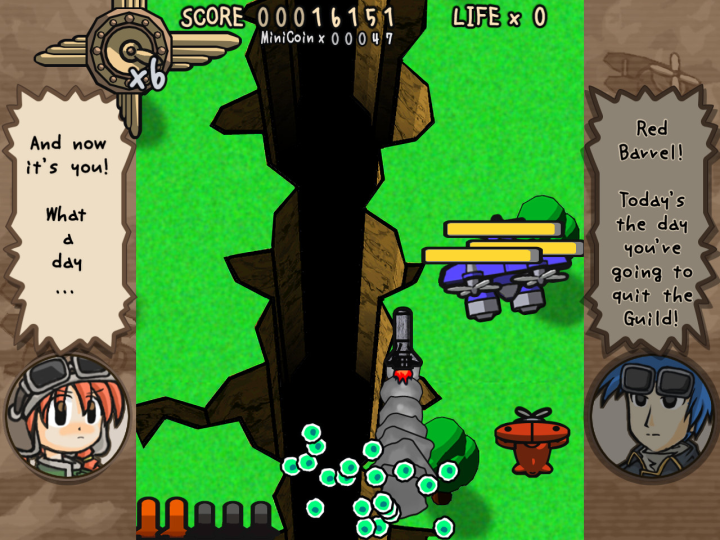 The multiple paths is one thing, but its scoring system is completely befuddling until you have numerous playthroughs under your belt. Im reasonably good at shooting all the ups, and, after several runs where I only swore constantly, I worked myself up to a point where I was completing the first stage more or less flawlessly. I ate no bullets, I lost no lives, I killed everything that had the misfortune to scroll on screen. Random bonus sections where youre put under more pressure to blow up everything? Aced it. Loud mouth unexplained rival who saunters in mid-stage to talk smack on Marc and her diminutive plane? Downed the sucker. Sometimes, bigger enemy craft arrive and blot up large sections of the screen. You can just attack them and move on, or you can snipe out their engines and weapons first, giving you a perfect! reward if you explode everything you can explode before theyre finally downed. Did that in spades. I beat up the boss daughter and, when he came to avenge her in his massive sky fortress, I took it apart piece by piece via endless bullet streams. Nothing was left in the sky but Marc in her immaculate chubby bi-plane and all should have been well. And then I got told this:

The key, I think, to Red Barrels ethereal scoring system lies entirely in the missiles, which you can rack up score multipliers with, and ties in with a timed counter in the top left-hand corner, probably. I mean, it wouldnt hurt to know for sure? Im pretty certain, seeing as I started seeing less one star ranks after I started abusing the missiles for more than big boss fights. But high score runs bring issues of their own; in order to keep the healthy stocks of missiles youre going to need for the chronic over-abuse high scores require, youre going to have to collect the gold coins that fall from the burning wreckage of dispatched enemy craft. Its harder to collect the coins when youre firing and getting a majority windfall often means braving the very heart of the screen filled with deadly projectiles, meaning you need to often handicap yourself offensively AND defensively. Then youre fully stocked with missiles and everything can die. But then youve run out of missiles and need to restock again. And so the deadly dance of death resumes.

I died a significant amount more after adopting score rush tactics. But suffered a lot less one star ratings. 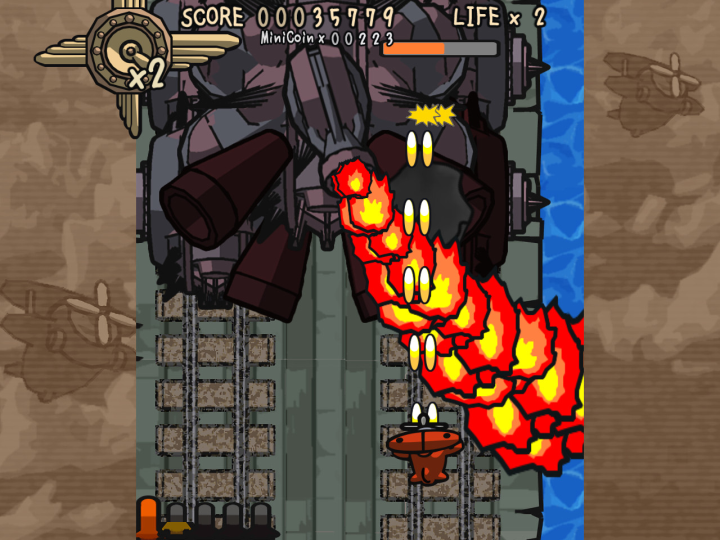 Still, Im never going to be super sure Im doing stuff right. Missile strikes grant you a small number of mini coins, which Ill happily collect, but have zero idea what they actually do. I have some idea of what to do and what not to do to make some of the branching deviations, but theres very little Im completely certain of. Right at its core, Red Barrel is a game that wants you to play it over and over and over again, learning its weird little secrets on a drip feed of accidental revelations. And, to be fair, Ive enjoyed going back to wrestle the game's myriad secrets from its resistant grasp. Every little morsel of information feels like an achievement that Ive earnt. But, at the same time, the games purposefully simple and stripped down foundations dont do it a lot of favours when youre replaying the first stage on repeat, with no differing weapons to experiment with, and no new crafts to test drive. Its a game that demands a high level of investment, with a significant amount of rewards awaiting those willing to fully commit. In an age when the media is so readily available to players, with games offering significantly more instant gratification available on tap, it will almost certainly struggle to find such a dedicated audience. But this isnt one for the filthy casual crowd out there; its a call back to those of us that painstakingly memorised all the sadistic little traps from R-Type, or put the hard hours into Fantasy Zone. Beating Flying Red Barrel literally means beating it, by taking it on under its own terms without infinite continues to fall back on, giving every mistake or mistimed dodge a sense of gravity rarely seen in todays gaming. Its a very old school temperament. It shows a rare faith in the player that they can overcome the challenges it sets forth if they work at it hard enough. Theres still a place for that in todays market, but whether youre part of that crowd is going to be down to you. Are you niche enough to obliterate a flock of adorable seagulls?
3.5/5

If you enjoyed this Flying Red Barrel - The Diary of a Little Aviator review, you're encouraged to discuss it with the author and with other members of the site's community. If you don't already have an HonestGamers account, you can sign up for one in a snap. Thank you for reading!

© 1998-2020 HonestGamers
None of the material contained within this site may be reproduced in any conceivable fashion without permission from the author(s) of said material. This site is not sponsored or endorsed by Nintendo, Sega, Sony, Microsoft, or any other such party. Flying Red Barrel - The Diary of a Little Aviator is a registered trademark of its copyright holder. This site makes no claim to Flying Red Barrel - The Diary of a Little Aviator, its characters, screenshots, artwork, music, or any intellectual property contained within. Opinions expressed on this site do not necessarily represent the opinion of site staff or sponsors. Staff and freelance reviews are typically written based on time spent with a retail review copy or review key for the game that is provided by its publisher.