Nefarious explores what might happen if a video game villain got a bit of momentum behind him and got to see some of his evil plans actually come to fruition. Revived from the ashes of every 16-bit action platformer ever, Crow is a princess-capturing evil genius who manages his first triumph when the resident hero of Macro City decides hes tired of dealing with bi-weekly kidnapping attempts and skulks off. Stolen princess in hand, Crow returns to his floating sky fortress, which is resplendent with an army of minions and a collection of war machines, desperate to keep his streak going. With only another four more princess' in tow, hell finally be able to power his Doom Howitzer. Then, all of those pesky governments would be forced to bow to his demands!

Only theres something a little off with his tyranny. Though Princess Mayapple is undoubtedly his prisoner, she seems pretty relaxed about it, asking Crows minions about the well-being of their families and treating the sky fortress as a second home. It becomes clear quite quickly that shes actually quite fond of Crow and his gang of crooks, hanging out with his assistant, Becky, and (to further her parodying of Princess Peach) reminding Crow of all the times she took him to tennis matches and kart races on their down time. Successful missions add further captives, who all socialise among themselves and lead to a dynamic I never really expected out of Nefarious. Weve all seen the roguish villain turn out not to be the black-hearted cruelster he initially seems, but rarely has an evil-doers sinister persona been so expertly assaulted. 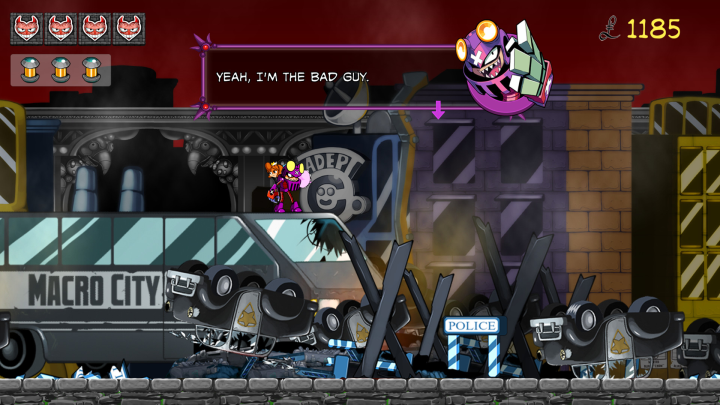 Its hard not to take an instant liking to Crow, thanks to his pseudo-Mega Man get-up and his self-admitted addiction to villain tropes and clichés. All he wants to do, after all, is rule the world, which is something he inches closer and closer to doing as the game proceeds. Each stage he undertakes is a kingdom ruled by one of those princesses he needs, the completion of which leads to another member of royalty in chains, and another populaces defence force smashed. Mayapples human kingdom is awash with rookie officers and police mechs, while a nearby Insect kingdom tries to defend their ruler with wasp knights and armoured beetles. They all maintain the familiar genre groundings of hidden collectibles and scattered currency to collect, but still offer differing environments to explore and overcome.

For the most part, Crows attempted conquest of the kingdoms is retro-reminiscent. Theres careful platforming to be had, forcing him to hurl himself through a collection of explosive blocks in an attempt to find solid ground, or to leap from the backs of giant hovering locust drones which are all that stand between Crow and a fatal drop into a bottomless chasm. He can defend himself against the worlds threats using his gauntlet, which either lets him smack foes in the face with a well-timed punch, or allows him to fire off a limited number of grenades that gradually restock. 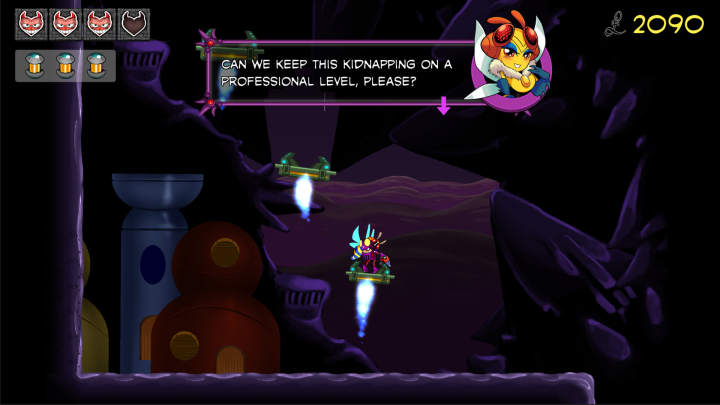 The grenade launcher weapon is an interesting idea that Ive not seen used a lot as a platforming staple. Rather than just flying directly ahead, grenades travel in an arc, meaning that a little more skill is required to see them hit a target. You can increase the power of a shot by holding down the trigger, or skid them across the ground to blow up your foes via dastardly ankle explosions. It also gives you the interesting ability to grenade jump; leaping into an explosion will propel you to greater heights, which is handy for taking the odd shortcut, but also necessary for weeding out some of those harder to obtain secrets, like a hidden chest full of cash or a vinyl record you can add to your jukebox, back on the ship.

You can spend any money you obtain buffing your defence, or you can dial up your offensive arsenal, adding traits to your melee or fiddling around with how the grenades work. You can do things like make them sticky, should you so wish, or do away with them all together and invest in a much more vanilla rocket projectile attack. You do this, of course, via a sentient robot shopkeeper kept in the belly of Crows airship wholl occasionally complain that you promised to build him some legs once and never got around to it. The upgrades are appreciated, since each princess offers better defences than the last. Because successful kidnaps are quite bothersome to their rigid schedules. Actually pull the heist off, though, and a captured princess offers temporary bonuses; some give you something as simple as a hover jump, while others brilliantly allow your projectiles to form temporary platforms in a similar vein to Rainbow Islands. 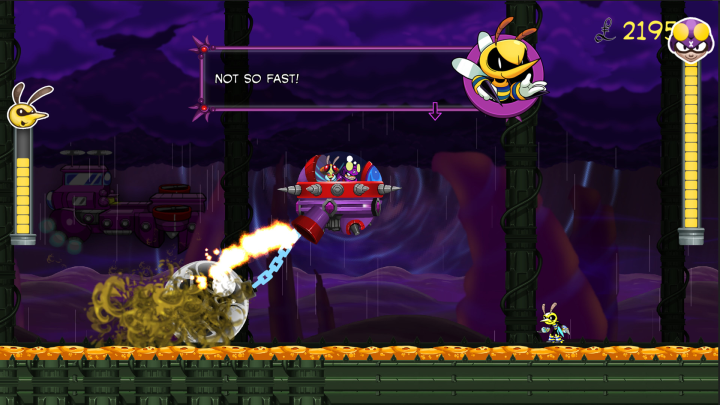 Then all you have to contend with is the reverse boss fights where you get to pilot the death machine against the plucky hero for a change. Sometimes these work better in theory, such as the re-imagining of the first Sonic the Hedgehog boss battle with Robotnik, which resurrects a floating platform with a wrecking ball attached, then has you use use physics to mash it into the face of a zippy super bee who's just gotta go fast. Perhaps there exists a level of grace that I simply cannot master, but I was forced to blunder through that particular boss fight by spasm-ing my craft and hoping the ball would flop in the right directions. Other battles, such as one where you must trample a city with a side-scrolling giant robot, or give 8-bit JRPGs a swift kneecapping, work much better.

And then, sometimes, the entire building of the evil empire has to be put on hold because youve run out of funds and are forced to go treasure hunting with one of the princesses in a colour-filled underwater adventure. Under the weirdly soothing vibrant pastel shades of the ocean, Crow is forced to view his captive as more than a means to power a Doomsday weapon as they  begrudgingly at first exchange little details of their lives. Or you need to shut down a speeding train, and one of your captives just happens to have a very specialised skill set that might help you out in that particular situation. Taking the time out to talk to his captives, or take them out on a day trip to the local villain museum, is allowed the chance to affect Crow and his evil plans of domination. I didnt expect that, but Im glad it exists.
4/5

If you enjoyed this Nefarious review, you're encouraged to discuss it with the author and with other members of the site's community. If you don't already have an HonestGamers account, you can sign up for one in a snap. Thank you for reading!

© 1998-2020 HonestGamers
None of the material contained within this site may be reproduced in any conceivable fashion without permission from the author(s) of said material. This site is not sponsored or endorsed by Nintendo, Sega, Sony, Microsoft, or any other such party. Nefarious is a registered trademark of its copyright holder. This site makes no claim to Nefarious, its characters, screenshots, artwork, music, or any intellectual property contained within. Opinions expressed on this site do not necessarily represent the opinion of site staff or sponsors. Staff and freelance reviews are typically written based on time spent with a retail review copy or review key for the game that is provided by its publisher.