Two of the four people in our assembled Drawful 2 group really like to draw. One of the remaining two had expressed no particular interest in that direction, but he is more than capable in that area. And the final member has occasionally doodled in notebooks but that's about it. For testing purposes, I would say that's a fairly representative sample of the population at large. It seems to me that if you bring together your friends to play an art-based multiplayer game on Switch, there are going to be some of you who are totally into the idea and some who are simply willing to be good sports.

Drawful 2 is a party game from Jackbox Games, a studio that specializes in producing party games. I quite enjoyed The Jackbox Party Pack 3 when it released on Switch last year, so I was excited to see what the team could do with something that to me looked a lot like a digital take on Pictionary (a board game I also happen to like, but can rarely play because I suck at making friends and am even worse at then enticing them all to gather in a central location). I'm happy to say my early impression was accurate. 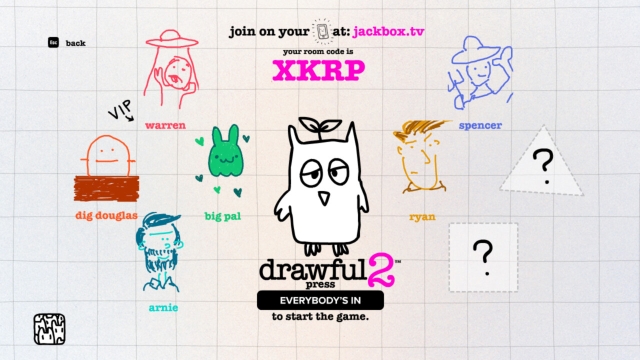 As you begin Drawful 2, your first task is to get everyone to pull out a smartphone or similar connected device. Your Switch plays the role of party host, and any friends who want to get involved simply head to the jackbox.tv site. Once there, they enter the room number provided on the television screen, specify a name they would like to use, and produce a simple drawing to serve as their avatar. As many as 8 people can participate, and there can be as many as 10,000 spectators.

Drawful 2 is ideally suited to online play, and that's clearly by design. Before my group played, we checked out the settings. There, players can prevent suggestive or risque prompts from being provided (for family-friendly sessions). They can also require that any participants who join be ready to stream their performance for the prospective Twitch audience. I can imagine a lot of people setting up games on that service and having a blast, but my own Twitch streams are typically met with complete indifference from the world at large and so I didn't do that. Besides, I had real flesh-and-blood friends right there in the same room with me! 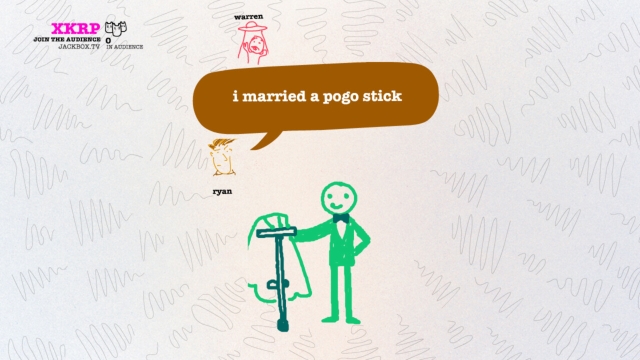 Our game began before it began, with one of our group drawing an insanely detailed portrait on her phone. If you didn't know better, you would swear she had a phone-compatible stylus. Me, I drew a bulbous head with a crown on it (to go with the "jason rules" handle I assigned myself). My fingers are too fat for anything more precise. Another of us drew squiggles, and the fourth drew what looked like a particularly expressive emoji. Then we were off to the races.

As a round begins, each active participant is assigned a phrase he or she must then draw. Ample time is provided, and Drawful 2 provides two colors so you can get fancy if you wish (from what I gather, the previous installment in the series limited players to only one). I didn't find that two colors were typically needed, because it's not like works of art are usually called for. The main constraint is going to be the lack of a stylus. If someone has an actual stylus, that would be the 2018 equivalent of a Game Genie, pretty much. 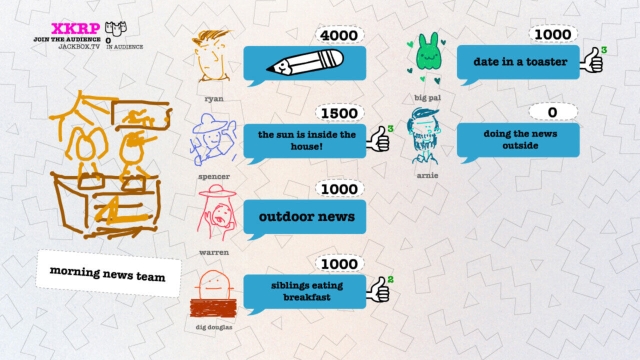 Once everyone has drawn their own specified phrase, which is unique for each participant, the game shows the first portrait of the lot. Players who aren't the artist then have a limited amount of time to guess what the drawing depicts, but they don't do that out loud. Instead, they enter it into their phone. Then all of the responses are shared--along with the correct one--and players vote for their favorite answer on their device. Finally, points are awarded to the artist, and to anyone who put forth a suggestion that other players guessed was the correct one. This process repeats until all of the drawings from the round have been shown and dissected. Then the round ends and a new one one begins. After several such rounds, the final score is tallied and a winner is crowned.

The very first thing I had to draw, in the first round of the first game, was a "pillar of salt." I don't know how you might choose to draw such a thing, but I thought back to the 1966 John Huston film, "The Bible: In the Beginning," which depicts Lot and his wife leaving the cities of Sodom and Gomorrah. Already missing her miserable life within those city walls, Lot's wife turns to look back as divine fire rains down from heaven. Lot watches in horror as she turns to a pillar of salt in front of him. So that's what I tried to draw, and it didn't go terribly well. I'm confident I could with some success depict such a scene with a sheet of paper and a pencil, but a fat finger and a smartphone are not up to the task. 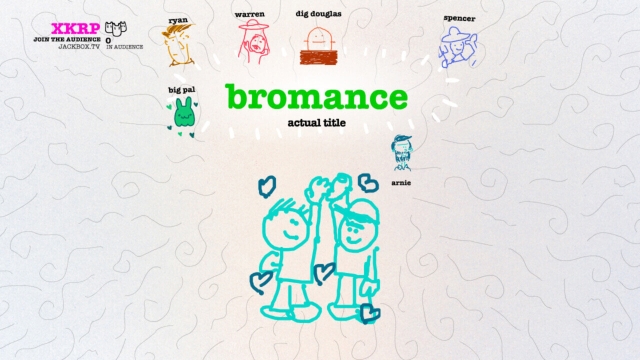 Later prompts were sometimes easier to draw. The thing about the prompts is that they tend to be vague, so that artistic interpretation and creativity are rewarded as a smartass digital host makes comments and funny sounds. And the developers also try to thwart likely strategies. For instance, I noticed early on that most of the "correct" answers are fairly sophisticated. So if someone draws a blob and one answer includes words that aren't commonly used by your friends, it's probably the right answer. But then there was the time when the actual prompt had been "draw a picture of a mouth with an apple in it and an arrow pointing to the apple," and of course no one guessed that. Everyone thought it was just me, being silly. I can't blame them for thinking that, either. It's exactly the sort of thing I would do. But in this case, it was the game doing it and not me.

Anyway, there's not a lot more to say about Drawful 2, other than that if you enjoy playing drawing games with good friends, or if you're ready to play with friends and strangers on Twitch, you should probably buy this little gem for $10 or so. It's not some spectacular piece of software that will change the way you view the world, but it efficiently guides folks through a virtual party event that I found quite enjoyable. It is no more and no less than what I expected based on the premise, and I'm content with that. I only hope someday I will manage to entice additional friends to play a few more rounds with me. We're buddies now, right?
4/5

If you enjoyed this Drawful 2 review, you're encouraged to discuss it with the author and with other members of the site's community. If you don't already have an HonestGamers account, you can sign up for one in a snap. Thank you for reading!

© 1998-2020 HonestGamers
None of the material contained within this site may be reproduced in any conceivable fashion without permission from the author(s) of said material. This site is not sponsored or endorsed by Nintendo, Sega, Sony, Microsoft, or any other such party. Drawful 2 is a registered trademark of its copyright holder. This site makes no claim to Drawful 2, its characters, screenshots, artwork, music, or any intellectual property contained within. Opinions expressed on this site do not necessarily represent the opinion of site staff or sponsors. Staff and freelance reviews are typically written based on time spent with a retail review copy or review key for the game that is provided by its publisher.