I had plenty of red flags pop up before commencing Horror Island. The game's simplistic title should have been my first indication that it would not be an ideal distraction. Its tropical setting (read: relaxing and not scary) should have served as another. Yet I forged ahead, heedless of the lack of expository, regardless of the fact that the protagonist disembarks on a sandbar and not an island, and despite the notion that my surroundings appeared to be the product of the developer experimenting with a game dev tool.

Drunkenly, I traipsed the dock--yes, this deserted sandbar has a dock and a fully pitched tent--whilst peering at the massive rocky island less than a klick away, wondering when I would have my chance to explore that terrain. As I reached solid land, all time stopped and the screen turned midnight black. I thought, "Well, at least it doesn't take long to get into the freaky stuff." That's when the accursed appeared in full, bloody form: an ad for the mobile app Game of War, complete with cleavage. 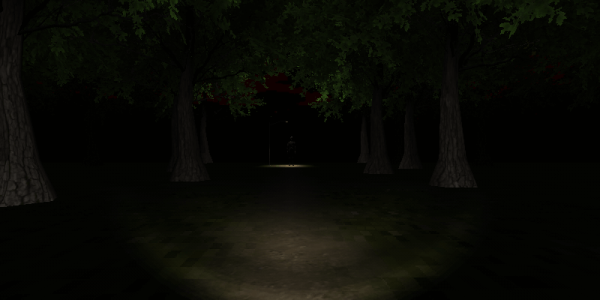 I understand that freeware titles need advertisements, but nothing tarnishes an experience quite like frequent pop-ups and a small, distracting banner at the top of the screen while playing. Was the incessant interruption of the former not enough? I mean, you run afoul of an advert about every twenty to thirty steps, so much that you forget you're playing a game. The added banner is not only unnecessary, it's just about insulting.

Eventually you find that there's little in your vicinity with which to interact, besides attempting to dive into the water and receiving a message regarding sharks. A quick scan of the area reveals a figure sitting on the dock. Finally! As you approach the man, he points his gun-shaped hand at his head, a la Jeff Hardy, and "shoots" himself before plummeting into the water and vanishing. 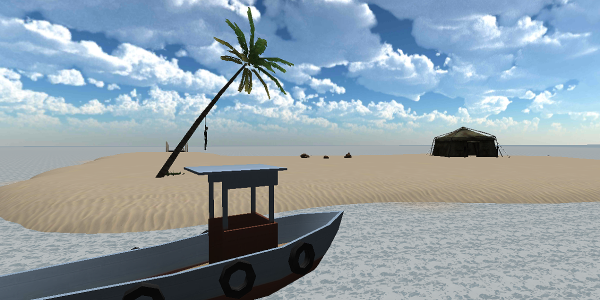 This isn't the only "scary" phenomenon you'll encounter, either. Advancing through the "campaign" amounts to witnessing something, going to sleep in the tent, having a dream, and then witnessing something else. You see a man shoot himself. Time to sleep! There's a fly-ridden body dangling from an illogically placed palm tree. Time to sleep! A boater saw me and couldn't be bothered with a rescue attempt.

The only promise Horror Island holds for fledgeling players lies in its dream sequences, which seemed to build toward something deeper and darker than the rest of the game. During one excursion into slumber land, the environment transforms into a forest similar to Slender. Following a path with a flashlight in hand, you come upon a dark figure who disappears, leaving behind a street light. Oh, vague narrative/possible backstory! Please tell me there's a darker plot beneath all of this banality...

Another nightmare leads you to a front doorstep, presumably yours. As you enter the connected abode, you find a murdered man propped up against a blood-spattered wall. You investigate further by clumsily ascending a staircase, upon which you occasionally become stuck. After reaching the summit, you enter a room and discover a terrified woman. Farther down the hall is a living room with a TV set that appears to be surfing itself. A check of the room reveals... 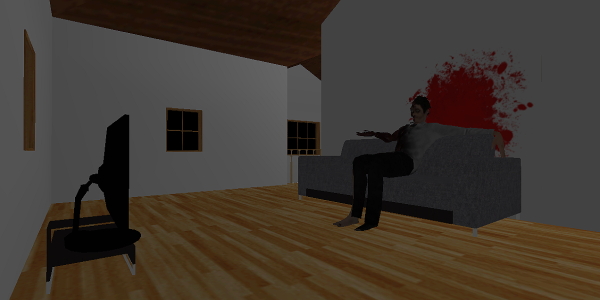 ...a lame, cheap-looking boogeyman type with a spinning head and dumb expression upon his mug. A cheesy version of the REET-REET-REET from Psycho's shower scene plays. Any hope that this game could have been frightening must have charged headlong into the blue waters early on, where it was gobbled up by a tiger shark.

You still haven't reached the island yet, so there's still hope. Following the above dream, you emerge from the tent, wondering what "terrifying" sight you might behold this time and immediately spot several enormous black skeletons positioned on the horizon, all of them dancing in a manner not unlike the stupid baby from Ally McBeal. The screen fades to black and the build reaches its explosive conclusion in the form of a message that pretty much says, "Oops! You lost your mind. Haha! The end."

I might be more angered by this, but the truth is the game only lasts about five to ten minutes. Just the same, that's five to ten that I could have spent on a superior mobile title. Heck, even playing one of the thousands of Candy Swipe clones would have been a wiser investment of a few minutes.

Horror Island is bereft of anything that would have made it enjoyable. It's overloaded with advertisements that interfere with play, it doesn't have even one somewhat freaky or even coherent concept or scene, and it's horribly unfocused. Never mind that it doesn't even take place on an island, but a freakin' sandbar that is somehow exempt from the rising and waning of tides. To put it briefly, you're better off devoting the space on your phone's storage to, well, anything else.
0.5/5

If you enjoyed this Horror Island review, you're encouraged to discuss it with the author and with other members of the site's community. If you don't already have an HonestGamers account, you can sign up for one in a snap. Thank you for reading!

© 1998-2020 HonestGamers
None of the material contained within this site may be reproduced in any conceivable fashion without permission from the author(s) of said material. This site is not sponsored or endorsed by Nintendo, Sega, Sony, Microsoft, or any other such party. Horror Island is a registered trademark of its copyright holder. This site makes no claim to Horror Island, its characters, screenshots, artwork, music, or any intellectual property contained within. Opinions expressed on this site do not necessarily represent the opinion of site staff or sponsors. Staff and freelance reviews are typically written based on time spent with a retail review copy or review key for the game that is provided by its publisher.