Spyro Reignited Trilogy is an oddity: it's a collection which is at once triumphant and obsolete. Its mere existence, to say nothing of the sweet execution, will bring great joy to early 3D action-adventure adopters -- those fans who were there from the beginning of that PS1-led 3D mascot run spearheaded in part by this Spyro.

On the one hand, I can say truthfully and without hyperbole, that Spyro Reignited Trilogy represents one of the greatest reimaginings I have come across in this generation. And there have been a lot of them! Retro has never been this cool, and compilations never so numerous. Some collections just throw the games on a disc, toss in a 'gallery' and call it a day. Others 'remaster' their games, and everything looks a little crisper. But that's not what this is. 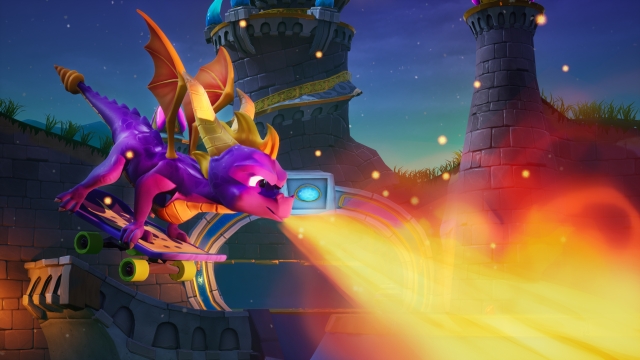 This is the version of Spyro that you couldn't have even conceived of dreaming of at the time you were playing the original. In your mind's eye, when you reminisce with nostalgia at its most potent, this is what you see. And that marks a distinct departure from many other trips down memory lane they often fail because our memories don't match reality. But Spyro Reignited Trilogy is so lush, so resplendent, so artfully brought up to current aesthetic sensibilities, that its world is actually better than you remember, and good enough to stand up under rose-tinted scrutiny.

As far as presentation goes, anyway.

And that is a thing to celebrate! The sheer level of detail and care put into restoring something that was so important to so many in those early years of 3D gaming, and getting it all right! Why the long face, then? Well, gaming goes beyond presentation, we know that. And despite this collection assembling three of the most beloved games in the series -- the original trilogy -- presenting them in the best way possible... the style of play at the core of Spyro hasn't necessarily aged well.

If you are a die-hard fan, by all means, you can stop reading now. For you, this is the thing dreams are made of. All the secrets you remember are right where you left them. But if you were only a casual fan, or God forbid, you missed the boat entirely the first time 'round, you will see Spyro in a different light, for what it is now.

Call it a colourful, charming... collectathon, which was so novel at the time, in large part because it was at the vanguard of a seismic shift in the way we consumed our mascot platformers. From their side-scrolling limitations, we witnessed the evolution to something newer and bigger, and dare I say, more immersive. But in a post Grand Theft Auto V world, the actual crux of Spyro's experience is not very engaging. 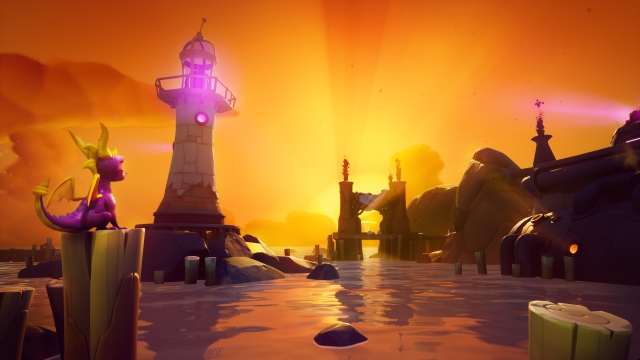 Our spirited, plucky purple dragon must liberate fellow dragons from each world he comes across while collecting gems towards unlocking even more worlds. You will run around fighting the camera, whether it is in active or passive mode, quite a bit more than you should; your view in this update is oddly limited, representing the only actual failing the slick, new package presents. That annoyance aside, you'll butt enemies with a cute little dragon charge, or else roast them from a greater distance, while jumping and hovering from platform-to-platform, collecting diamonds and bashing statues and foes alike.

But with the passage of time, Spyro feels like a generic kid's game; or an unremarkable casual title. Neither description is overly negative, nor is either complimentary. And so, despite there being a lot of material here -- three full length games on offer, altogether boasting a plethora of worlds, countless gems to collect and dragon brethren to liberate -- the games will all start to feel the same after a while. And even as I made considerable forays into the heart of each title, even as I marveled at how admirable a job the developers did crafting the world I was exploring, I was having an increasingly dull time exploring it.

A proper recommendation then, is difficult, outside of the easy one made to hardcore fans which is almost unnecessary. Newbies mightn't find the games all that compelling, and yet, the collection seems like a slice of history that should be experienced if one has the chance, and this compilation allows us to consume that history in the best possible way. Given that I find myself somewhere between hardcore and newbie, Spyro Reignited Trilogy earns for me something just slightly above a marginal recommendation, and a caveat to let your own sensibilities guide you.
3.5/5

If you enjoyed this Spyro Reignited Trilogy review, you're encouraged to discuss it with the author and with other members of the site's community. If you don't already have an HonestGamers account, you can sign up for one in a snap. Thank you for reading!

© 1998-2020 HonestGamers
None of the material contained within this site may be reproduced in any conceivable fashion without permission from the author(s) of said material. This site is not sponsored or endorsed by Nintendo, Sega, Sony, Microsoft, or any other such party. Spyro Reignited Trilogy is a registered trademark of its copyright holder. This site makes no claim to Spyro Reignited Trilogy, its characters, screenshots, artwork, music, or any intellectual property contained within. Opinions expressed on this site do not necessarily represent the opinion of site staff or sponsors. Staff and freelance reviews are typically written based on time spent with a retail review copy or review key for the game that is provided by its publisher.