I bought a new game! my wife says cheerfully. She isnt big into games and mostly sticks to sudoku puzzles on her phone and the occasional Animal Crossing, so for her to buy a game, unprompted, for her own interest, is rather unusual.

The game arrives a few days later. Overcooked: All You Can Eat it says on the cover. Never heard of it, I think to myself, but its probably like Cooking Mama or something. How bad can it be? Almost symbolically, I pull the esoteric SaGa Frontier out of the Switch and insert what (to me) looks like a port of some casual iOS fluff.

First thing I see is an EULA. Thats a first, I think to myself. Never seen something like that in a console game. I guess this is a port. After that and some loading, we decide to try the campaign for Overcooked 1. It opens with a story of the world getting destroyed by the beast, which is a giant spaghetti monster (not The Flying Spaghetti Monster) and some Onion King jabbering on about the end of the world. My wife finds it funny; I shrug. Then there is more loading and the game starts.

The first mission involves making salads. The two players are split apart on different sides of a kitchen, with ingredients on one side and cutting boards on the other. The player with the ingredients needs to get them out and pass them to the other player to prepare on the cutting board (which just means putting it there and pressing X). After they are prepared, they need to be passed back over, put on a plate, and dropped at the serving station.

Heres an example: To make a burger, you need to prepare meat at a cutting board and put it into a skillet. You may also need to prepare lettuce, tomato, and cheese, depending on the order, and assemble them onto a bun. Once the meat is done cooking, you need to grab it off the stove before it catches fire, get it onto the bun, get the thing onto a plate, and then drop it off at the server station. The order you do things isnt strict (you can put buns on all your plates and then make the meat or can put the meat on a plate by itself and add the other stuff later), just so long as everything is on the plate before dropping it off. Because of the different steps and the few seconds to prepare or cook, players need to actively talk to each other to get tasks completed in an orderly and efficient manner, lest they end up with a bunch of meat and no buns or get in each others way. Oh, and someone needs to wash dirty plates. 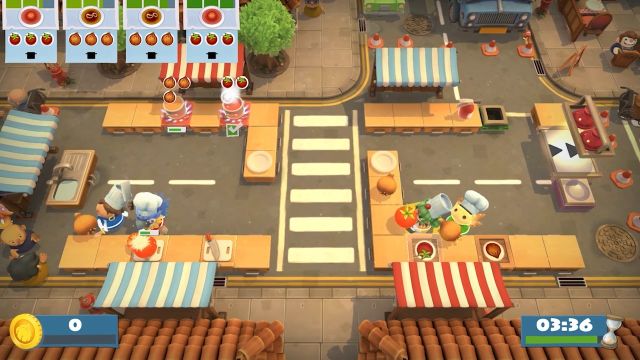 Most missions have a unique gimmick reminiscent of how some Smash Bros stages change. During one stage, an earthquake temporarily cuts the kitchen in half, preventing access to key areas unless the players planned how to handle that situation. In another stage, you are on a spaceship with ingredients and equipment spread between two air-tight chambers. The players need to put ingredients into little pods that can travel back and forth between the chambers to coordinate and get the job done. All the while, orders are coming in, customers are getting angry if they wait too long, and the whole thing is timed (once the mission has finished loading).

Overcooked really shines in its multiplayer and the various ways it forces people to talk and cooperate. A good player cannot simply carry the team because they will often be locked out of doing certain jobs based on the current state of the stage, and there always seems to be slightly more tasks than the number of available players. This game truly feels like it was built from the ground up with co-op as the intended scenario--so much so that single player requires one person to control two characters at once, switching between them to simulate having a friend. 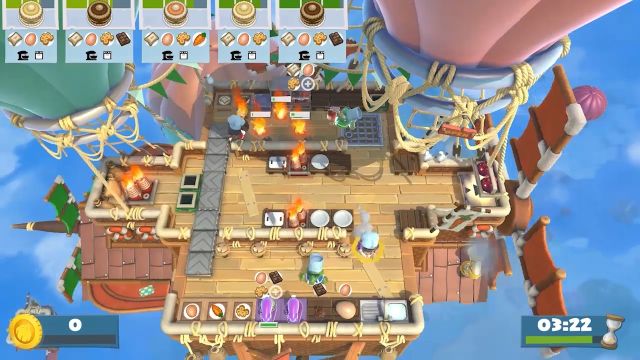 Unfortunately, at the normal difficulty Overcooked is frustrating in some bad ways. With the constant changing of stages and time limit to complete orders, youll spend most of a mission feeling like you are failing. The small icons to distinguish ingredients and the way they appear next to the square that they occupy means that when things are hectic, you often cant tell what is sitting where, uselessly putting meat on a frying pan next to the stove or trying to plate two ingredients and ending up holding an empty plate. Sometimes you cant do something and its not clear why. For example, you can grab soup directly out of a pot to a plate, but you cant do the same when pulling out a burger bun, so you end up putting the plate on top of the buns and standing there like an idiot.

In general, the presentation is not great. My wife and I both needed to move closer to the TV to actually see the icons. Theres an option to increase the text size to something more legible, but that doesnt help with the icons. The small spaces also make it difficult to see what you are picking up and where you are putting it. In handheld mode, things fare a little better, but not by much. When the kitchen gets too fast or you fail a mission, it rarely feels like your fault, but rather like the game was being unfair. Youll spend the loading screens to get back to the back map and into a level again stewing about it.

There is an assist mode difficulty, which eliminates the time limit on individual orders and gives more leeway before things left on the stove start to burn, but this mode ends up being too easy compared to the normal difficultys too hard. The game would honestly be better with a simpler graphical style that more clearly indicated what is sitting on each tile at a given time.

When playing with my daughter, the first thing she commented on was the frequent load times that happen when transitioning between every screen. The story segments are the worst, not because the story is terrible or drawn out but because there is a loading screen in and out of them, as well as the next level--so your reward for beating a set of missions is to sit through three loading screens to keep playing. As seeing an EULA when the game boots suggest, this is not a native Switch game, and the frequent load times, framerate drops, and tiny icons indicate not enough effort went into optimizing the experience for Switch. 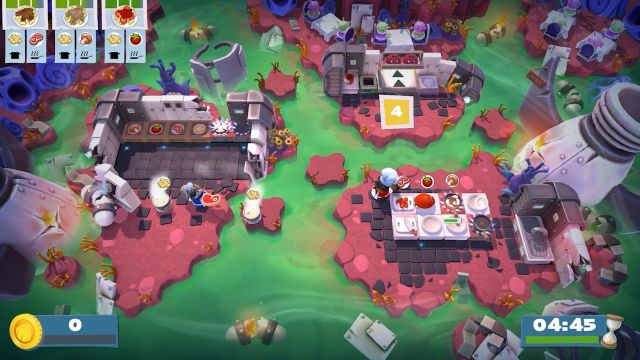 Considering that Overcooked was essentially made by two people, I didnt mind overlooking these rough bits. The multiplayer really is fun. Its a great game to break out when you have a mix of traditional and non-traditional gamers since the concept is easy to understand (interface and usability issues notwithstanding). It naturally gets players talking and co-operating, and everyone can feel useful regardless of skill level.

Overcooked: All You Can Eat features a remaster of the original Overcooked, Overcooked 2, and all the DLC that was released, providing a lot of missions to complete. Since each mission has a star ranking, theres enough content to keep playing if you enjoy the premise and have people to play with.

If you enjoyed this Overcooked! All You Can Eat review, you're encouraged to discuss it with the author and with other members of the site's community. If you don't already have an HonestGamers account, you can sign up for one in a snap. Thank you for reading!

© 1998-2021 HonestGamers
None of the material contained within this site may be reproduced in any conceivable fashion without permission from the author(s) of said material. This site is not sponsored or endorsed by Nintendo, Sega, Sony, Microsoft, or any other such party. Overcooked! All You Can Eat is a registered trademark of its copyright holder. This site makes no claim to Overcooked! All You Can Eat, its characters, screenshots, artwork, music, or any intellectual property contained within. Opinions expressed on this site do not necessarily represent the opinion of site staff or sponsors. Staff and freelance reviews are typically written based on time spent with a retail review copy or review key for the game that is provided by its publisher.