Grand Theft Auto V appropriately opens with a heist. Somewhere in a version of the Midwest that looks a lot like Canada, four thieves brave a police shootout amidst a snowfall. The moment is both chaotic and beautiful, a chance for the games developers to showcase competent cover mechanics and intelligent AI while promising great things to come.

Fade to black. Fast-forward ten years. Several of the participants in that grand heist are now much older. Theyve put that old life behind them, more or less. Michael is living--somewhat miserably--with his family in a mansion as part of a special arrangement he secured in exchange for testimony. His final days as a gunman appear to have passed, though his violent streak serves as a bold question mark. Lester, the brains behind the operation, walks with a cane and is battling an unspecified illness. He spends his time in a fabric factory, keeping a finger on the pulse of the technology industry. Then theres Trevor, the psychotic one, who resides in the middle of the boonies and pays bills with his meth production. Hes like Walter White, but without many lucid moments where he seems almost compassionate and human. 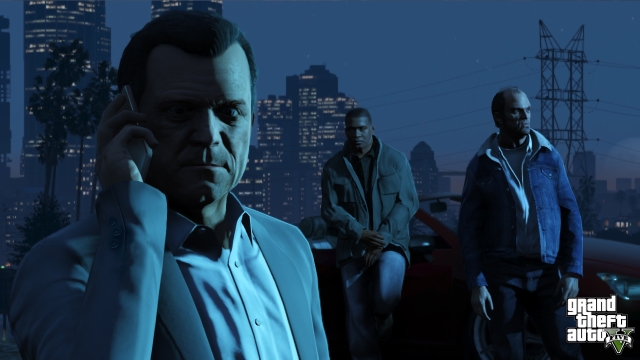 In the present, the original crew of four looks a little bit different because Brad--the fourth member of the once merry band--is not in any position to join in on future heists and Lester has his illness to think about. Michael, meanwhile, has faked his own death and is hiding from Trevor, his former best friend. So the close-knit crew might have lived out its final days, except there comes one fateful moment when a young man named Franklin tries to repossess a car that Michaels son Jimmy purchased under less-than-ideal terms from a scamming dealership. The old bank robber and the young hustler are soon thrown into an unlikely alliance that eventually leads to them establishing a proper new crew--complete with an angry and bewildered Trevor--and that is the general setup for Grand Theft Auto V.

You will have no doubt noticed that I just devoted an awful lot of text to the story in a Grand Theft Auto game, which is something I didnt expect to find myself doing when I stood in line on launch night to purchase my copy. I thought I would do what I usually do: play through 2 or 3 missions, spend a few hours goofing around while giving the digital police a hard time, and then put the game on my shelf to collect dust along with many of its peers. That didnt happen, though, because I almost immediately became interested in Michael--once he was properly introduced early on--and I grew to like Franklin a great deal and even developed a certain fondness for Trevor. Theyre all anti-heroes, of course, difficult to like on the face of things, but their struggle against the odds (and against good guys who arent even all that good) proved interesting enough that I was able to keep going.

It doesnt hurt that the core gameplay is so difficult to resist. I already mentioned the high-quality AI, which allows you to finally face law enforcement officers who act somewhat credibly (and not too perfectly). Thats only one minor point, though, in a game that is full of similarly important triumphs. Vehicles are now an absolute joy to drive, when youre driving the ones that should handle well. Almost before I knew it, I was racing through the streets like I might in a Need for Speed game, weaving through surprisingly plentiful traffic, drifting around corners, launching over ramps and in general behaving like a maniac. It can be glorious, if you want it to. I also like the shooting mechanics, which make it easy to snap from one target to another, racking up headshots and finally having a real chance at survival during even the most heated of shootouts. Sure, there were moments when I would snap to some guy in the distance while a closer goon filled my character with bullets, but those instances are thankfully uncommon and theres also a checkpoint system in place that feels quite fair. Youre rarely penalized for a failure more than is necessary, a welcome change from previous titles that often kicked you back to the start of a lengthy mission. You can also replay missions for a better ranking, if you complete one and dont like how things stand. 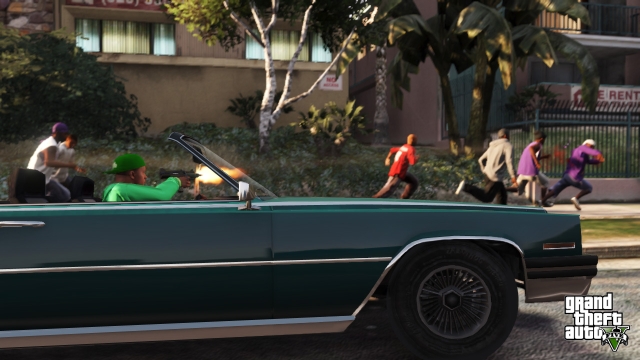 Perhaps what I liked most, though, is the way that the city finally feels like a proper city. During the day, you can hardly go anywhere without finding pedestrians loitering on sidewalks, withdrawing money from ATMs, honking horns at one another in traffic, panhandling, talking on cell phones, waiting in line to see movies or doing other things that feel delightfully human. In the evening, patterns change. You see more prostitutes and shady characters. Lights flicker to life on towering skyscrapers as the sky changes hue. Weve seen that sort of thing in plenty of open world games before, yes, but here its more convincing. Here theres more attention to detail and theres also a grander sense of scale. When you drive up into the hills overlooking the city and you look out over the sea of concrete and metal and realize that you can explore nearly every inch of its surface, thats a beautiful moment. And then you do explore and it feels so much better than it ever has before in a Grand Theft Auto title.

Grand Theft Auto V is more ambitious than any previous installments. It even lets you change heroes on the fly, provided the plot hasnt briefly left one or more of them unavailable (which happens a few times over the course of the game). You can go from riding a speedboat as Michael, to fleeing from police pursuit as Trevor, to casual relaxation with Franklin as he plays with his dog. Each character comes with separate special abilities, as well. Michael is able to slow down time in gunfights. Franklin can do something similar, but while driving. Trevor can slip into a state of rage that allows him to absorb more damage before crumpling to the ground. There also are a number of scripted events that are specific to one character or another, or you can easily ignore them if you dont feel that they add anything worthwhile.

Considering how much Grand Theft Auto V does right, its a shame that sometimes it works so hard to make a fellow want to quit. Im used to some profanity in Mature-rated games, but Grand Theft Auto V often will drop several f-bombs in the span of a few seconds. Franklin also uses a racial slur when gathered with his friends, which feels similarly overdone. Theres also a fair bit of nudity and over-the-top sexism throughout the plot--often to no productive or even amusing end--and the radio delights in ragging on the American way of life at each opportunity. Some people will say that its all just satire, but the content often comes across as mean-spirited or preachy, depending on the scene. If you ever want to feel properly insulted, listen to the disc jockeys on the radio and really pay attention to what theyre saying. 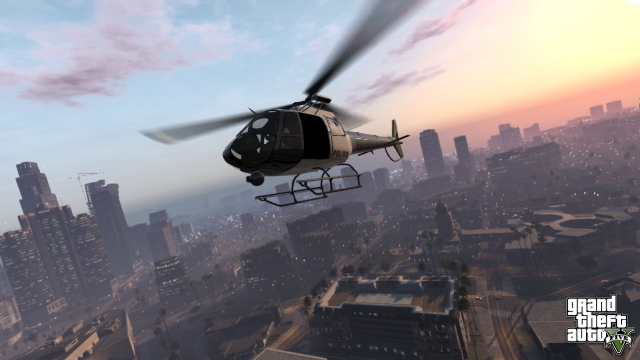 The good news is that theres plenty of content to enjoy along the way. Even if some of the writing is aggravating and a little too self-satisfied for its own good, the core design is more solid than ever before. Clearing the campaign will likely take players a good 40 or 50 hours if they stop along the way to just have fun like they should, and thats without completing oodles of additional side content that I cant really discuss without spending hundreds of words on the effort. Theres also an online mode, which still hasnt let me connect--after several days being active--but which I can imagine might add dozens of hours to the total amount of time that Im willing to spend with the game.

Ever since Grand Theft Auto III promised a three-dimensional open world full of mayhem and adventure, Ive been looking forward to the eventual installment that actually delivers on that. Happily, Grand Theft Auto V is the one that finally does. Packed with content enough to keep anyone busy for dozens of hours, the game sets a new standard within its genre in spite of a few frustrating flaws. Youll have to put up with some inexcusably uncomfortable moments along the way, but the ride is one that very few avid gamers over the age of 17 should be willing to miss.
4/5

If you enjoyed this Grand Theft Auto V review, you're encouraged to discuss it with the author and with other members of the site's community. If you don't already have an HonestGamers account, you can sign up for one in a snap. Thank you for reading!

© 1998-2020 HonestGamers
None of the material contained within this site may be reproduced in any conceivable fashion without permission from the author(s) of said material. This site is not sponsored or endorsed by Nintendo, Sega, Sony, Microsoft, or any other such party. Grand Theft Auto V is a registered trademark of its copyright holder. This site makes no claim to Grand Theft Auto V, its characters, screenshots, artwork, music, or any intellectual property contained within. Opinions expressed on this site do not necessarily represent the opinion of site staff or sponsors. Staff and freelance reviews are typically written based on time spent with a retail review copy or review key for the game that is provided by its publisher.