Lifespeed is a New Nintendo 3DS racing game from the folks at Wee Man Studios Ltd. The game places the player in the cockpit of a really, really fast ship, then sends that ship careening along a series of snaking corridors. The goal is to reach the finish line ahead of nine rival ships, or at least ahead of most of them, which can be quite the challenge for a variety of reasons.

I've played my fair share of speedy sci-fi racers, including multiple installments from the popular Wipeout and F-Zero franchises, and I would say that Lifespeed is closer to the former than the latter. Your ship is really good at getting bumped off track and skidding along the environment, and it moves fast enough that the curves are difficult to take. I spent most of my first hour just trying to avoid slamming into walls and moving obstacles, which didn't leave me a lot of time to worry about using weapons to give me the edge over my competition. The fact that I also had to tend to the vertical axis in addition to the horizontal one, much like in the plane sequences in Diddy Kong Racing, didn't help.

Controls are at least kept very simple, though you aren't briefed on what they actually are until a couple of races into the game. The shoulder buttons allow mostly useless barrel rolls to the left and right, the B button brakes, and the A button fires weapons. You might have noticed that I forgot to tell you how to accelerate, but you noticed wrong. I didn't forget to tell you because actually there is no button dedicated to such matters. Your ship speeds forward at all times, and the most you can do is slow it down--a little bit--by applying the brakes. It's an unusual approach, but one that eventually worked just fine for me. When it worked better than fine, the game was at its best and I was soaring along tunnels, free as a bird. I liked that a lot. 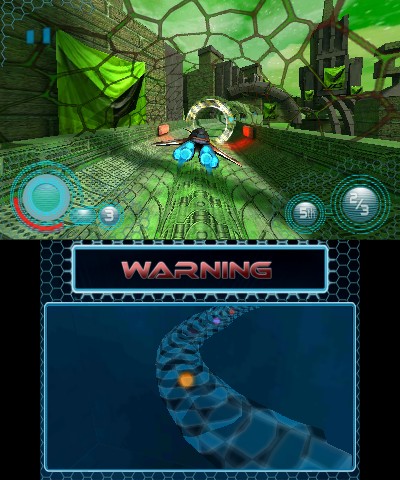 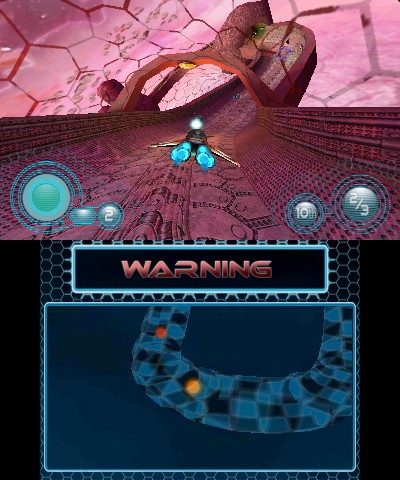 As you race through the various courses, which feature anywhere from 2 to 5 laps, you'll pass through various rings suspended in the air. Their markings tell you what they do. Some give you a brief boost. Others provide a more sustained boost, but only when you pass through three of them consecutively. Still others improve your shields, or give you weapons.

Weapons aren't all that spectacular. There are several different ones, but for the most part, it feels like you're either picking up mines that you can drop behind you, or missiles that you can fire ahead to strike an opponent. Generally, you must move into a good position and then stay there until target indicators settle down a bit. Then you can blast away and maybe down your rival. Or maybe not, because a lot of missiles are good at striking against walls instead of following your target around a corner.

Your ship has a certain amount of life energy, and you drain it whenever you brush against hazards (such as rotating laser beams that cross hallways) or when you collide with adversaries or take damage from their weapons. If you are struck fatally, your ship will slowly rotate in the air for a few seconds before a new one gradually materializes. In basically every case, this extended process means that most any vehicles that were behind you get to pass you and probably take a significant lead to boot. Such situations rarely occur until you've led for the last lap or two and are about to cross the finish line, which is exasperating because it leaves you with insufficient time to rectify the situation.

By default, the game prompts you to play on the easiest difficulty setting, which offers "slow" vehicle speed and "easy" opponents. I was having none of that, though, so I bumped things up a notch and handily cleared the first course on my initial attempt. Then I couldn't finish the second one, no matter how hard I tried. I would come in anywhere from fourth to eighth place (and sometimes came in eighth after a performance far superior to a previous one that netted me superior placement), which meant I could choose between trying again or returning to the main menu. 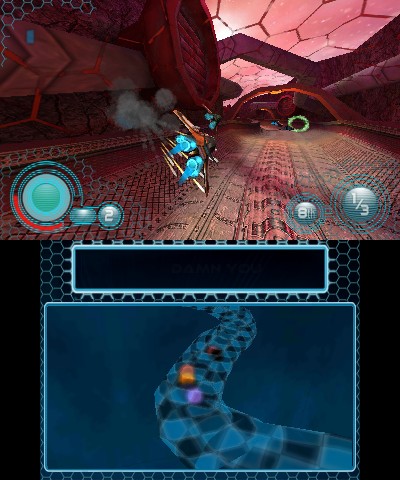 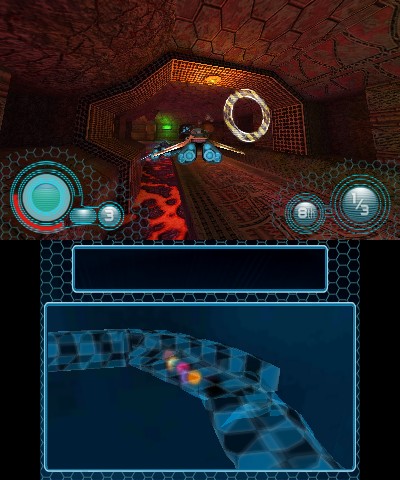 Finally, not liking my own show of weakness, I went with the default setting. The resulting experience was markedly improved. The racers didn't all immediately gain a huge lead off the starting line, and they flew less like racing gods and more like me. Consequently, I was generally able to finish in first place (or not far behind that) in each subsequent event, and I zipped through the Story mode with little difficulty. That's actually something you want to do in one sitting, if possible, because the game doesn't seem to save your progress when you back out to try a different mode or a different difficulty setting partway through.

Speaking of the story, well... it's not much to talk about. The idea is that racers from different planets assemble and compete in a bloodthirsty grand prix, with racers determining the fortunes of each planet. This is a somewhat barbaric arrangement, because pilots often die on the track, but an old prophecy suggests that this particular event will bring about a welcome change following 1000 years of tyranny. To me, it all felt a bit like the setup of The Hunger Games, except with racing instead of death arenas. Between some matches, storyboard sequences that looked like they were taken from a generic comic book advanced the plot, but it all moved so fast that I didn't have any time to grow fond of any of the characters. Then everything ended on a cliffhanger, which I suppose won't be resolved until someone gets around to making a sequel.

Aside from those rather cheesy storyboards, though, Lifespeed actually looks very good indeed. I tried playing with the 3D slider cranked up almost to the maximum, but it didn't really provide the sense of depth I expected. Playing without the effect enabled worked just fine, if not better. The environments are nicely detailed, with destructible elements and solid texture work. Some of the various obstacles repeat from one course to another, and there's not a diverse range of spectacular scenery, but the tracks hold together well and I only clipped through a barrier once. Another time, the game locked up my system, but it kept track of my progress and I was able to resume play after resetting. Technically, everything is mostly fine.

Besides the story campaign, players can also choose to participate in a single race (where the first choice is once again difficulty level), or in a Championship event. Going with the latter option allows you to pick from a number of different pilots, each with his or her own backstory and stats. Top speed, acceleration, shields and agility are all referenced variables, but it doesn't feel to me like any one driver is substantially different from the next and there is no narrative. That mostly limits any replay value the mode might otherwise have offered.

There are eight tracks in Lifespeed, a brief story mode that consists of the equivalent of around four brief comic book pages spliced between those stages, and a Championship mode that simply has players advance through the same familiar tracks in a different order. In short, the game is... short. What's there is pretty good, once you get over the touchy controls irritating AI and a few other minor rough patches, but it's difficult not to feel that what the developer has actually delivered here is around a third or a quarter of what might have been a very good or even great game if only it had been more expansive. The title warrants a recommendation if you're big on the genre and looking for something new to justify your purchase of a New Nintendo 3DS, but it may fall short of the mark for anyone else.
3/5

If you enjoyed this Lifespeed review, you're encouraged to discuss it with the author and with other members of the site's community. If you don't already have an HonestGamers account, you can sign up for one in a snap. Thank you for reading!

© 1998-2020 HonestGamers
None of the material contained within this site may be reproduced in any conceivable fashion without permission from the author(s) of said material. This site is not sponsored or endorsed by Nintendo, Sega, Sony, Microsoft, or any other such party. Lifespeed is a registered trademark of its copyright holder. This site makes no claim to Lifespeed, its characters, screenshots, artwork, music, or any intellectual property contained within. Opinions expressed on this site do not necessarily represent the opinion of site staff or sponsors. Staff and freelance reviews are typically written based on time spent with a retail review copy or review key for the game that is provided by its publisher.