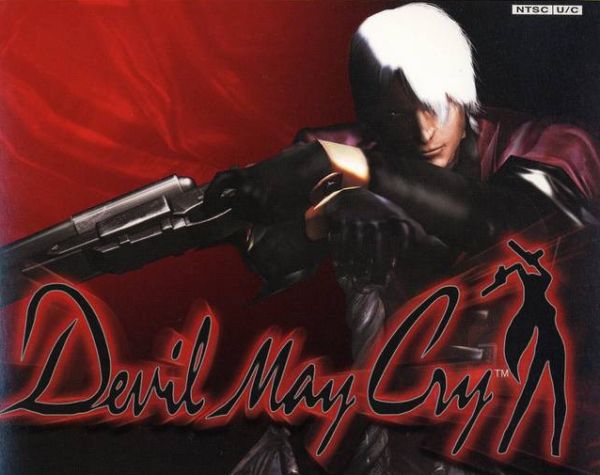 Devil May Cry's opening cutscene is a doozy. It begins with a woman ominously materializing, barging into an establishment owned by the game's protagonist Dante, and trading bits of stilted dialogue with him, all before attempting to assassinate him. However, neither corny lines nor flashy effects manage to fell the man, and even piercing his torso with a massive sword proves ineffective. Rather, he clasps the hilt and wrenches the blade free from his pleural cavity and pretty much says, "You tried to murder me. Let's go on an adventure together!" Side by side, Dante and his former opponent Trish travel to a dilapidated castle on an isolated isle, where the game's narrative becomes even sloppier.

Let's face it, though: one does not initiate Devil May Cry looking for a deep narrative with stunning visuals and an Oscar-caliber script. Hell, I don't think many games from 2001 (if any at all) can provide you with any of the previously mentioned qualities. The part in the game's intro that should have gotten your attention was Dante pulling the sword out of his chest and returning Trish's failed murder attempt with attitude. That's what Devil May Cry is all about. 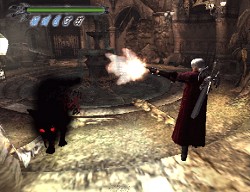 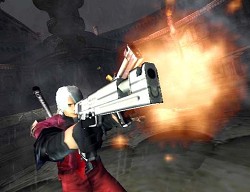 What Devil May Cry lacks in storytelling, it more than makes up in style and over-the-top action. It's the kind of game where you can slash an anthropomorphic lizard into the air, leap upward to join him, then exchange your sword for a pair of handguns. From there you can unload countless bullets into his reptilian frame, slash him back downward, and land next to him to execute a punishing lunge that will send him crashing into a nearby set of armor. Once he's back on his feet, you can slap on a pair of flaming gauntlets and knock his scales off with a series of uppercuts and martial arts kicks that put old school UFC to shame, then end his suffering with a shotgun blast between his eyes. Suffice it to say that playing Devil May Cry can be an empowering experience, as the elaborate combos you can pull off at times feel limited to your imagination.

Even after you've seen Dante's initial array of impressive moves, you can occasionally purchase new maneuvers using red orbs acquired from the corpses of your assailants. The game also rates your performance after a successful string of blows, granting you a wealth of red orbs for more impressive displays of violence (read: bigger combos). Nothing feels more invigorating than adding a new attack to your repertoire after beating the tar out of a horde of tough foes and obtaining a fat stack of red orbs. 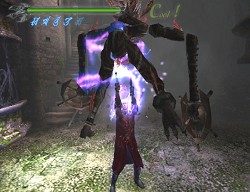 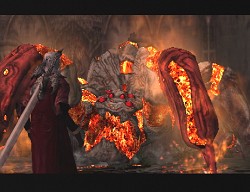 Each successfully landed blow also boosts your "Devil Trigger" meter, which allows you to transform into a demon. This cranks up the crazy on Dante's move set, allowing you take the air and rain bolts of lightning on the competition, or repeatedly twirl at high speeds through airborne menaces. You can even launch crippling fireballs from your gauntlets or throw your sword like a boomerang while Devil Trigger is activated.

Devil May Cry's campaign isn't only defined by Dante's ridiculous combos, though, as its vicious rogues gallery plays an important role in keeping the experience exciting from the first mission to the last. Blade-wielding marionettes kick off this foray, serving as the title's Goomba. Eventually, cackling reapers clutching immense scissors join the party, circling the battlefield and passing through solid objects. Monstrous panthers that appear to be made of pure darkness also join the festivities, transforming their bodies into a variety of slicing and skewering implements. With each new opponent you meet, Devil May Cry's difficulty rating rises to a new, face-breaking peak. Battles become so intense that holding still is tantamount to a death wish. Eventually, even button-mashing becomes an obsolete tactic. That's when you'll regularly find yourself checking your six or dodging in anticipation of a devastating attack long before your opponent even executes it.

Devil May Cry is a great teacher. If you stick with it long enough and pay attention to your adversaries' motions, patterns, and cues, you'll eventually learn how to weave in and out the fray. You'll discover when it's wisest to go on the defensive, and when it's best to just unload with all your fury. You'll need to make that distinction quickly, though, because you'll encounter the first boss by the third mission. The campaign doesn't give you much room to breathe from there, either. You'll find yourself battling a boss about every other stage or so, sometimes even two or three levels in a row. Heck, right after taking on the first boss, you'll encounter him again in a narrow corridor, where you'll have little room to evade his immolating projectiles. 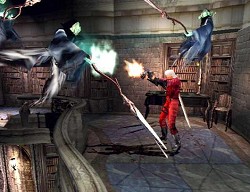 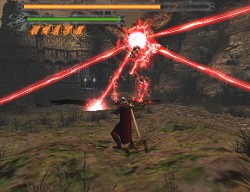 Boss fights constitute some of Devil May Cry's greatest and most challenging moments. It's during occasions when you reflect a titanic granite tarantula's fireballs back into his mouth that you're thankful for the skills you've acquired through rigorous playing and training. It's at times when you're trading blows with a demonic knight or squaring off against Rodan's Satanic, laser-spitting half-brother aboard a ghost ship that you're grateful that Devil May Cry taught you to react quickly and spot chinks in your opponent's armor.

Unfortunately, there are times when you will be seemingly powerless. I tend to refer to these mishaps as "camera moments." For instance, when you're up against the first boss, if you happen to run down a tight walkway between a wall and a row of columns, the camera will quickly change perspective. Where before you may have been holding the analog stick upward, walking towards the top of the screen, you'll now be facing the opposite direction. This can cause Dante to suddenly shift directions, sometimes right into a fireball. These camera moments crop up fairly often throughout the campaign, but not often enough to hamper the experience as a whole. More than anything, they're an annoyance rather than a game-breaker.

If there's anything else I can gripe about, it's the game's use of platformer elements during a few scenes. One that really sticks in my craw involves a bridge that shatters, creating a series of floating platforms. It doesn't appear to be a woeful setup until you realize that Dante leaps in a awkward arc that would be a deal-breaker for any 3D platformer. Because of that, it's easy to miss a platform when jumping. Thankfully, the game doesn't include many of these sequences, possibly for obvious reasons.

Although certain aspects of Devil May Cry haven't aged well, its most important qualities have stood the test of time. It's been twelve years since the game's release, and it's still a stylish, exciting action title with plenty of bite. I may not enjoy it as much these days as I did in 2001 (I rated it 10/10 back then), but it still manages to provide me with a skull-crushing thrill ride that scores of modern action games couldn't live up to.
4/5

If you enjoyed this Devil May Cry review, you're encouraged to discuss it with the author and with other members of the site's community. If you don't already have an HonestGamers account, you can sign up for one in a snap. Thank you for reading!

© 1998-2020 HonestGamers
None of the material contained within this site may be reproduced in any conceivable fashion without permission from the author(s) of said material. This site is not sponsored or endorsed by Nintendo, Sega, Sony, Microsoft, or any other such party. Devil May Cry is a registered trademark of its copyright holder. This site makes no claim to Devil May Cry, its characters, screenshots, artwork, music, or any intellectual property contained within. Opinions expressed on this site do not necessarily represent the opinion of site staff or sponsors. Staff and freelance reviews are typically written based on time spent with a retail review copy or review key for the game that is provided by its publisher.