At least on the island my character helped settle, somewhere in the imaginary world presented in Animal Crossing: New Horizons, today was Bettina's birthday.

Unless you're already playing the game yourself, which is quite possible given that it released very nearly three months ago and has sold like gangbusters in the challenging year that is 2020, you might not know who Bettina is. And even if you've tried your hand at the placid life simulator that is one of Nintendo's most successful Switch releases to date, you might still not know Bettina because the game is built to offer players a personal experience that varies wildly. 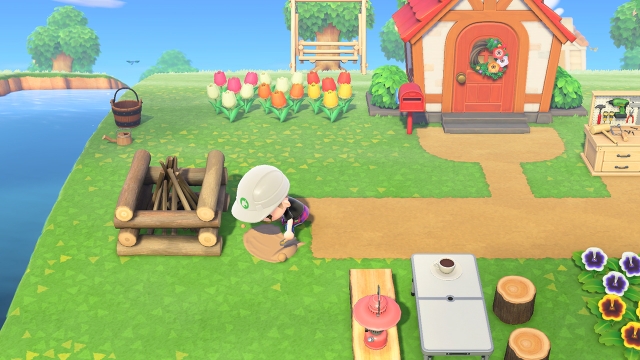 So who is Betinna? She's a mouse, with red fur and ears that are almost comically large, even in a game where the art style makes almost everyone resemble a bobblehead doll. I actually don't know more about her than that, because I think my wife was the one who invited her to our island and I haven't talked to her a lot. But Isabelle, the friendly secretary working at City Hall, told me it was her birthday and that left me to buy a present. I headed down to the Supply Depot and purchased a beach ball for just over 400 bells, then headed to Bettina's cottage in the highlands and stumbled into a surprise party. The mouse was delighted I'd come, and she loved the gift. I earned some miles as a reward and was on my way.

If you haven't ever played an Animal Crossing game, I don't suppose much of the above made a lot of sense. Who cares about buying a beach ball for a cartoon figure that wouldn't be out of place on a Nick Jr. television program? As it turns out... I do. 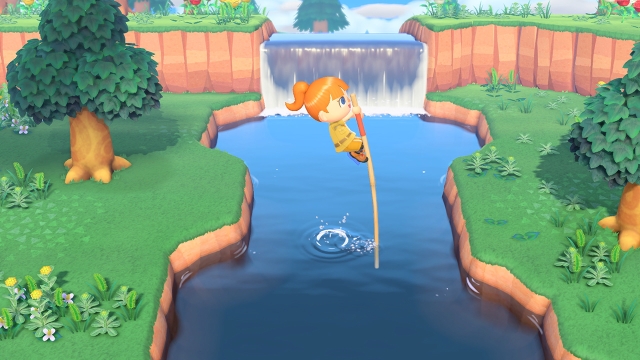 Animal Crossing: New Horizons is the first Animal Crossing game I've spent a lot of time playing since the original (and admittedly more limited) Animal Crossing captured my attention when it launched on Nintendo's GameCube. There have been a few new entries in the nearly 20 years since, including the well received Animal Crossing: New Leaf for 3DS in 2012, but none of them have delighted me and hooked me to the extent this latest take has.

I've delayed putting together a review for New Horizons, despite puttering around on my island nearly every day since launch, because I knew I was enjoying myself but I wasn't sure I could articulate exactly why that is. If I rattle off a list of features, or go into what has changed, how do I make any of it sound exciting? How do I write for anyone other than those players who have probably already picked up a copy, played it for a few dozen or hundred hours, and moved onto something else?

Then I saw people talking about The Last of Us II. 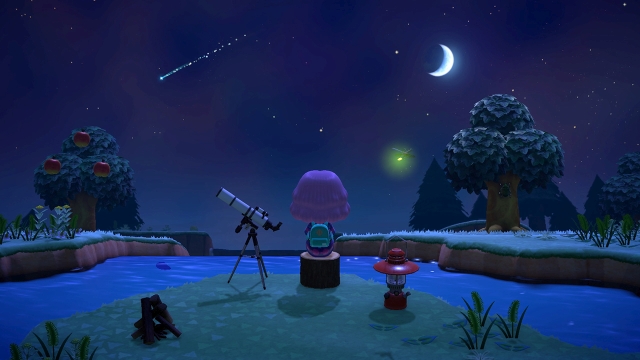 As I write this review, The Last of Us II is still a week from launching. However, the embargo has just lifted and first reviews have already started to appear. The critical consensus so far is that it's a terrific game. I know that without even reading any of the reviews for myself. I also know that critics find the experience difficult, not in the Dark Souls sort of way where every encounter could easily be your last if you're not prepared, but in the emotional sense. The marriage of gameplay apparently has the potential to leave those who play it an emotional wreck. There's an absorbing world to explore, and a brutal reality that tears at the very soul.

I realized that's what I like about Animal Crossing: New Horizons, more than any one new feature or group of features: having a happy place where I can get away from the world's pressures--very real and plenty crushing--and just enjoy doing something absolutely silly and inane, like buying a beach ball to surprise a mouse at her birthday party. 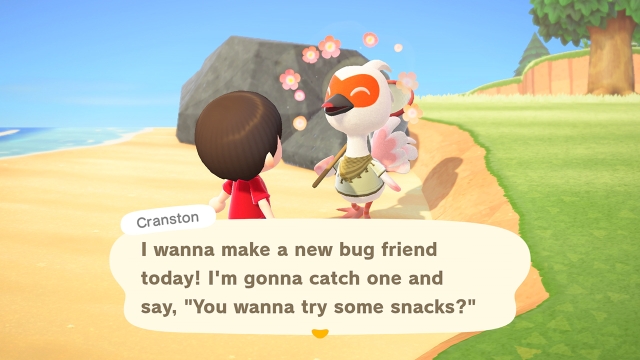 So, that's clearly an awfully long preamble and not particularly fresh or original, but I felt like I had to make my point just the way I did because there's no use pretending Animal Crossing: New Horizons is a game for everyone. We can safely leave the "Citizen Kane" comparisons in the trunk where they belong. This virtual island just happens to be an effective bit of escapism, an inviting place to visit and make your own. If the notion of doing that appeals to you, keep reading and I'll fill you in on a few of the highlights. If you're sick of sunshine and rainbows and just want to blast your way through a digital apocalypse with gorgeous mountain views, maybe see what Naughty Dog has to offer instead.

New Horizons is neither terribly original nor exceptionally ambitious. Your game begins as you choose an island layout. Then catch a flight to that island and you get to settle it, like Robinson Crusoe if he had a tanooki ready to source supplies. Gradually, you hone the island to fit your vision. You go from pitching a tent to building a house. You construct bridges to cross the river--instead of vaulting over it with a pole--and you assemble stairs so you can climb cliffs without whipping out your trusty ladder. A hastily constructed airport gives you access to remote islands, where (among other things) you might meet villagers from other places who you can invite to come join you in your paradise-in-progress. And of course, you fish and catch bugs and donate them to a scholarly owl in a museum. 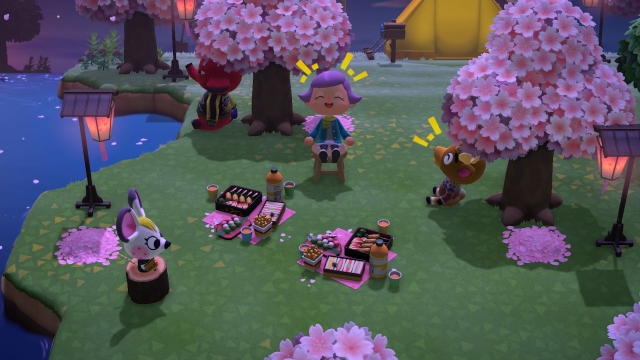 The biggest change in New Horizons is definitely the extent of the control you have to sculpt your paradise into something that suits you. Players are taking advantage of that creative freedom, too. I visited one island where I felt like a proper tourist. Some person I had just met online had gone out of her way to make everything super welcoming, with a riverside cafe, merchant stands and an orchard along the north cliffs that contained every variety of available fruit. I've seen videos online, showcasing villages that look more like a metropolitan zoo, or a medieval castle with a moat. One person I saw had customized an island so extensively that it was a near-perfect replica of a Pac-Man maze.

Most actions a person might take are rewarded in some way. The "miles" program provides incentive to complete daily chores, such as talking to a set number of villagers or chopping down or planting trees, hitting rocks with a shovel or shooting balloons out of the sky. Miles are good toward special items, such as rugs or fountains or crafting recipes or tickets to remote islands you can explore and ransack guilt-free because you're not forced to mess with someone else's creation. This is a terrific way to reward players for their continued daily investment and engagement. 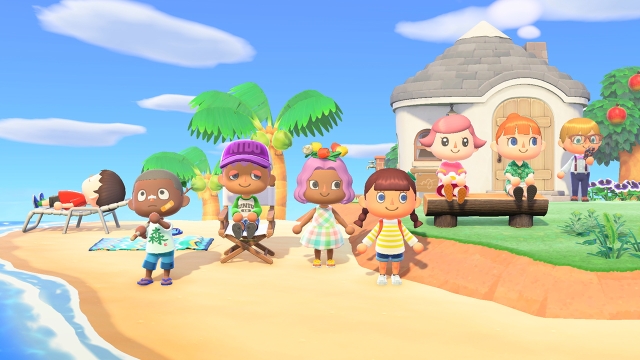 I don't like everything the developers have done, but the stuff I don't feel like they got quite right amounts to only a minor inconvenience. There are ways to get around inventory restrictions, and even the most long-winded of villagers will stop rambling in short order if you've already heard what they have to say. Timed events sometimes introduce irritating wrinkles, like when a multi-day Easter egg hunt made it harder to snag the resources I wanted because everything I touched shook loose a pastel blob instead of lumber or fish, but they're not common enough to get in the way.

Animal Crossing: New Horizons released at just the right time to offer me a much-needed daily escape from an often disillusioning world, an alternative to blood-soaked wastelands or epic quests that determine the fate of a world or similarly grand fair. It's just me and my wife and sometimes online friends puttering about on fantasy islands, never needing to worry about more than paying back a lender who is in no particular hurry. There are plenty of other moods the game might not do much for, but it's the perfect antidote for my 2020 mood. Also, for whatever it's worth, I'm glad Bettina liked the beach ball.
4.5/5

If you enjoyed this Animal Crossing: New Horizons review, you're encouraged to discuss it with the author and with other members of the site's community. If you don't already have an HonestGamers account, you can sign up for one in a snap. Thank you for reading!

© 1998-2020 HonestGamers
None of the material contained within this site may be reproduced in any conceivable fashion without permission from the author(s) of said material. This site is not sponsored or endorsed by Nintendo, Sega, Sony, Microsoft, or any other such party. Animal Crossing: New Horizons is a registered trademark of its copyright holder. This site makes no claim to Animal Crossing: New Horizons, its characters, screenshots, artwork, music, or any intellectual property contained within. Opinions expressed on this site do not necessarily represent the opinion of site staff or sponsors. Staff and freelance reviews are typically written based on time spent with a retail review copy or review key for the game that is provided by its publisher.