This review is late.

Only some of that is because the rumours are true and I am indeed a lazy slacker. However, more of the delay comes from the fact that Loot Rascals plays dirty. Its one of those rogue-like randomly-generated dungeon crawler affairs that seems to be in vogue right now, but its also cunningly addictive. Its simple on paper: slog your way through five stages with increasing difficulty and destroy the time-warping inter-dimensional gum monster that lives in the planets core. Then rescue a giant robot head and go home. You know, that old chestnut. But the planet you crashed on has filled itself with weird, bloodthirsty monsters. They dont want you to progress. They want you to die.

Their murderous desires will be fulfilled the vast majority of the time. Theres a whimsical air surrounding Loot Rascals, with its nonsensical plot, goofy, exaggerated cartoon art style and vibrant pastel colour scheme, but that makes it no less viciously homicidal. A small army of alien psychopaths bar your way, existing for the sole purpose of caving in your infant-headed astronaut protagonists face.

Luckily, youre given plenty of tools to fight back. Rather than the genre norm of gaining equipment drops through victory, you instead build up a collection of cards to equip. Sometimes, these cards offer straight-forward bonuses like defence or attack boosts, but the better ones come with little extra quirks. Like being reversible so that you can swap out which field it boosts on the fly, or offering bonus perimeters. A card might be bolstered if its placed on an odd numbered inventory slot, or lose some of its own value if its positioned on the bottom row. It might even grant penalties if its the only type of card you have in your deck. Gaining and equipping cards is a constant (ahem) shuffle, as you try to arrange things so that the one that offers +2 to the card on the right perhaps annuls the negative bonus from the one which takes -1 from the card below. 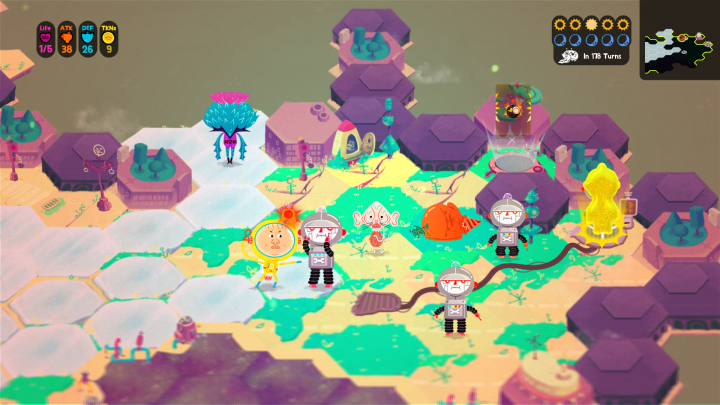 You can also scrap unwanted cards for tokens, which act as Loot Rascals currency. Mostly, this option is only good when you need to refill your very limited health meter at each stages safe hub, but it can also be used to trigger special effects if you have the right specialist card, such as when you summon a huge sphere of cawing birds that acts like a huge bomb, or refill ranged attacks. These you can obtain also through cards which you permanently overlay over other existing cards, to give you the ability to shoot fire or lightning. Or to give you limited healing powers. Or allow you to summon up a distracting version of yourself to act as a decoy while you slip past large gatherings of monsters.

Collecting and abusing cards goes a long way towards improving your chances of survival, but youre sometimes offered helpful little hacks. Find a particular card and you can exchange it with the chef chilling in the safe hub for more inventory space. Find a rocket out on the map somewhere, and you can send a card out into the depths of space where, who knows, it might crash back down on one of your subsequent playthroughs. Defeat a monster and claim a card from him that used to belong to another player, and you have the option to keep it or send it back to them. Feeling helpful? Youll obtain a holographic buddy with that players stats who will help you on your adventure for a while. Feeling selfish and would prefer to keep the card? The same hologram will appear to try and extract bloody vengeance for your theft!

You can often receive old cards back the same way, because each monster that kills you steals a card or two before your entire deck is eventually banished and youre sent right back to the start. Having helpful folk out there who are willing to resupply you provides a much needed leg up, because despite all your fancy deck management and careful use of your abilities, youre just a fragile little human in a world of ogres, broomstick-armed fuzz piles and pirate captain eagle eggs. 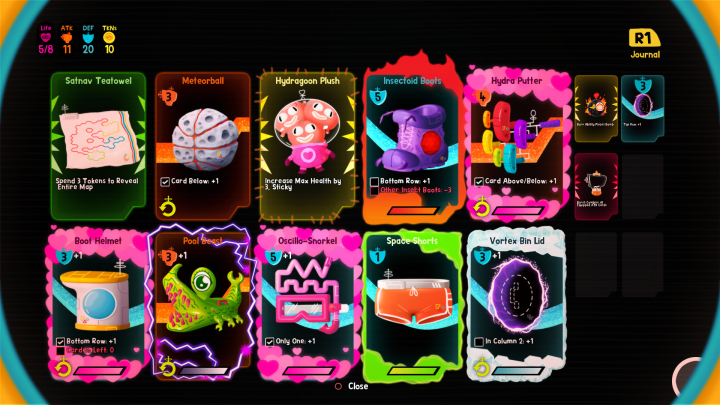 The fancifully varied cast of villains belies their dangerous intentions and unique peculiarities. Some care not for subtlety and just bum rush you whenever they can, forcing you to abuse the games day/night cycle in an attempt to land the first blow. Every move you make in the dungeon cycles the day forward slightly, and each beast becomes more fallible during certain periods, which allows you to land the first blow. This means youre often jockeying for place, keeping advancing foes at bay just long enough for the time cycle to turn to your advantage.

Other adversaries have guns or shoot spiderwebs in an attempt to pick away at you from afar. Still others know they have no chance in a fair fight against you, so they run for cover when you approach and try to activate touch pads that trigger nearby angry robot manufacturing machines wholl build an army to attack you on their behalf if left unchecked. Some change their own parameters on each turn, meaning you need to time their personal transformation as well as the time cycle to initiate a fight in your favour. Take the infuriating Horse Bros., who switch between an equine powerhouse and a wimpy seahorse with each step they take. You really want to fight the latter in the early going. You really dont want to get pummeled by something looking as smug as the horse half of that abomination does.

If he doesnt get you, though, something else will. You need to significantly power up at each stage if you plan to stand a chance in the next one, but youre only offered a finite amount of time before powerful bugs are attracted to the corpses of the fallen, repopulating areas of a gutted dungeon once more. Once they arrive, theres only so much time before a significantly stronger monster turns up to chase you around the map. Being caught almost certainly spells game over. Then hell pinch your best cards, destroy the rest and youll be right back at the start of the game with nothing to show for it. Aside from the lingering feeling that you could have done better, had you only buffed your defence more, or not wasted so much time manipulating the clock and taken a few more risks. Then youll jump back, in convinced youll do better the next time. You probably wont. But youll keep trying, anyway, as that one-last-turn count dials up into double digits.

Thats certainly what happened to me. And now, as a direct result, this review is late.
4/5

If you enjoyed this Loot Rascals review, you're encouraged to discuss it with the author and with other members of the site's community. If you don't already have an HonestGamers account, you can sign up for one in a snap. Thank you for reading!

© 1998-2020 HonestGamers
None of the material contained within this site may be reproduced in any conceivable fashion without permission from the author(s) of said material. This site is not sponsored or endorsed by Nintendo, Sega, Sony, Microsoft, or any other such party. Loot Rascals is a registered trademark of its copyright holder. This site makes no claim to Loot Rascals, its characters, screenshots, artwork, music, or any intellectual property contained within. Opinions expressed on this site do not necessarily represent the opinion of site staff or sponsors. Staff and freelance reviews are typically written based on time spent with a retail review copy or review key for the game that is provided by its publisher.