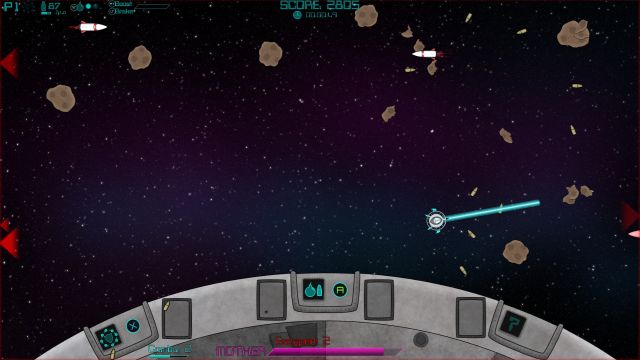 My maiden voyage in Super Mega Space Blaster Special was pathetic. I remember flying to the top of the screen and aiming my blaster at an asteroid. I collided with the top edge of the battlefield and exploded; instant game over. I don't remember if I scored, but it's likely I didn't. However, I was not so easily discouraged. I went right back into the fray, trying like mad to acclimate and learn all of this title's rules and nuances.

This isn't some elaborate, super complex game we're talking here, either. It's a retro-style space shooter that mimics the coin-op classic Asteroids. Its core mechanics are pretty much the same: you float around in space, blow things up and try not to die. However, unlike Asteroids, you're constantly in motion. You also only have a finite amount of ammo, so you need to make every shot count. Thankfully, each slain enemy leaves behind a little ammunition to keep you going. With each successful blast, your score increases and you slowly feel less inadequate. Eventually, that score pops up on a leaderboard, and then you don't feel like such a hot shot...

Thankfully, Super Mega deviates from its dated inspiration enough that you don't need to dump handfuls of quarters into it to improve your score. For one thing, the game offers a decent array of unlockable ships, each with its own distinct stats and features. One of my favorites is an insect-shaped vessel that harks back to Yars' Revenge. This bad boy comes with decent handling, fair speed and extra large projectiles, allowing you to nail foes without pinpoint accuracy. Unfortunately, its brakes aren't very effective, so you can't get too risky while maneuvering it. All the same, I found better luck earning high scores by searching for the ship that melded best with my play style, and there were plenty on offer. 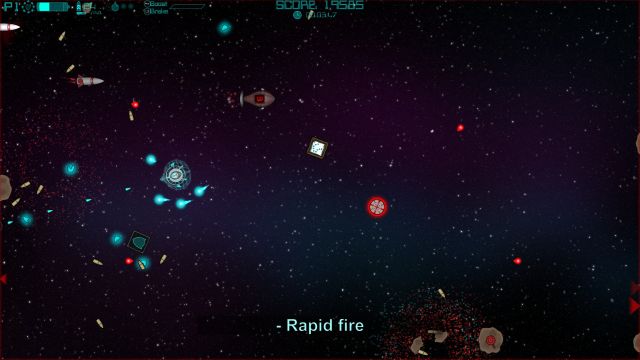 In order to access these goodies, you need to collect coins. You typically find them floating around after you defeat a foe, but you earn the lion's share of them by completing challenges. Rather than run through a campaign, you complete specific tasks for cash. You start off with rudimentary missions, such as destroying ten asteroids in six seconds or collecting three different weapons in a single game. Eventually, though, you receive some tough trials, like maintaining a shield for three minutes or building up a kill combo of one hundred without using a screen-wiping bomb.

The earliest of these objectives ease you into the experience, as they ought to. However, the best of them always feel like their goals are just out of reach. You try to attain a score of 20,000 and constantly die before reaching half that. Sometimes, though, you hit your stride and destroy tons of asteroids, missiles, rockets, alien ships and classic flying saucers until you reach about 18,000. Then, a stray bullet brings your party to an abrupt halt. But even in death, you think, "I can do this." You climb right back into the cockpit continuously fail until some ungodly time in the morning, when that 20,000 is yours.

You need to not only learn self-preservation if you wish to survive, but also you need to be opportunistic. Enemies sometimes drop power-ups when they explode, leaving you handy lasers, multi-shot upgrades, bullets that bounce off the edge of the screen, and sometimes even defense boosters. You can acquire a shield that keeps you alive after one collision, or even nab "protectors" that surround your ship. 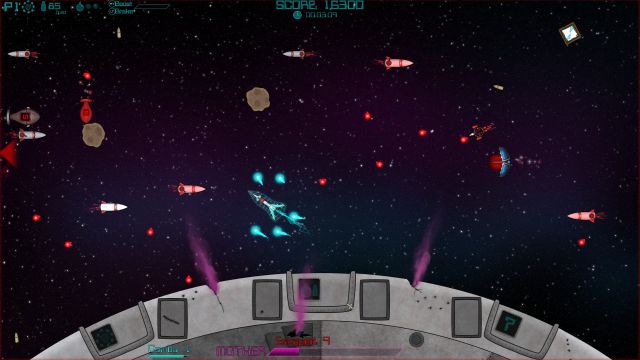 The added firepower may sound reassuring, but the truth is this shooter really has it in for you. The single-player option provides two play modes, and both come with tight constraints. In one of them, you defend your mothership, which appears as a huge space station at the bottom of the screen. Foes spawn slowly at first, with some gunning for your intergalactic home. As adversaries or their bullets collide with it, its health bar decreases. This mode comes with one perk, though, in that the mothership coughs out power-ups as you attain higher kill combos.

As time passes, enemies become more numerous and varied. Missiles and asteroids give way to pursuing red pods and aggressive fighting machines, not to mention tiny rockets that are difficult to hit. This is when "Defend Mother" is at its best; when you're carefully weaving around targets, making sure nothing slips past your defenses and damages the mothership. You'll find yourself often racing for power-ups to stay on top of crowd control, while constantly gauging when would be a good time to drop a bomb. After all, you don't want to use your last explosive and leave yourself high and dry when you need it...

The other mode available is "Survival," and it's not quite as entertaining. You don't have a base to defend, but your gun is stuck in auto-fire mode. On top of that, this mode limits your fuel supply, so you need to constantly refill your fuel tank as well as your ammo. Unfortunately, the auto-fire function kind of sucks the action out of the game. Half the fun of an action title is controlling when and how much you shoot, and taking that element away reduces the experience to floating around, dodging debris and collecting stuff. 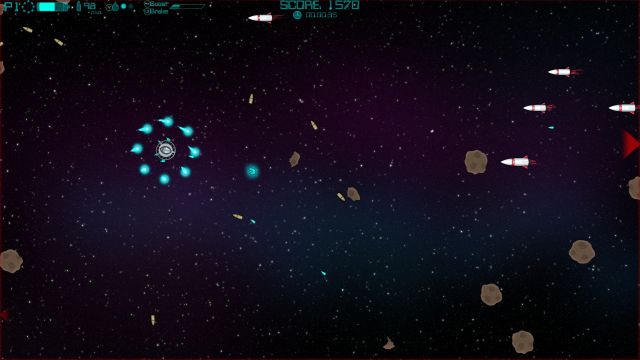 Sadly, those are the only single-player options available. I don't like to be greedy when it comes to content, but I also can't hide my disappointment when one mode is awesome and the other is merely tolerable.

If you're playing with a friend, you can also challenge either of those two modes. There's an additional two-player mode as well, called "To the Death," where you take on a friend's vessel and mothership. Unfortunately, the current build only offers local multiplayer, so you actually need to clean your house and invite someone over.

I really dig Super Mega because it's a simple, addictive space shooter with a good number of unlockables and challenges, plus a terrific base defense mode. However, it lacks more varied modes of play and only offers local multiplayer. Eventually, I'm going to unlock all of the ships and clear the challenges, and then I'll be left with only one worthwhile play mode. I know the developer has promised more content, but as it stands, you're looking at a good shooter suffering from a slight dearth of content.
3.5/5

If you enjoyed this Super Mega Space Blaster Special review, you're encouraged to discuss it with the author and with other members of the site's community. If you don't already have an HonestGamers account, you can sign up for one in a snap. Thank you for reading!

© 1998-2020 HonestGamers
None of the material contained within this site may be reproduced in any conceivable fashion without permission from the author(s) of said material. This site is not sponsored or endorsed by Nintendo, Sega, Sony, Microsoft, or any other such party. Super Mega Space Blaster Special is a registered trademark of its copyright holder. This site makes no claim to Super Mega Space Blaster Special, its characters, screenshots, artwork, music, or any intellectual property contained within. Opinions expressed on this site do not necessarily represent the opinion of site staff or sponsors. Staff and freelance reviews are typically written based on time spent with a retail review copy or review key for the game that is provided by its publisher.