No matter how impressive it actually is, a puzzle game is at a disadvantage when you try to describe to a friend how much and why you enjoy playing it. Even the very best the genre has to offer often falls apart at that point. Blocks fall from the sky and you have to place them so they form a solid mass and lines then disappear? Such an activity admittedly sounds like a mild diversion, and yet Tetris proved irresistible for a whole generation of gamers who looked past the dull premise.

Energy Balance is unlikely to ever be remembered as one of the genre's shining moments, but it's quite good at doing what it sets out to do. Your goal is to place positive and negative numbers on a grid so their sums match predetermined digits that are positioned around the margins of that same grid. For example, you might have a row of digits that needs to add up to 47, which intersects with a column that needs to add up to -7. And you have a bunch of number tiles, which you must rearrange on that grid so that every column and row is in order. When you manage that task, the puzzle is cleared and you can move on to the next one. 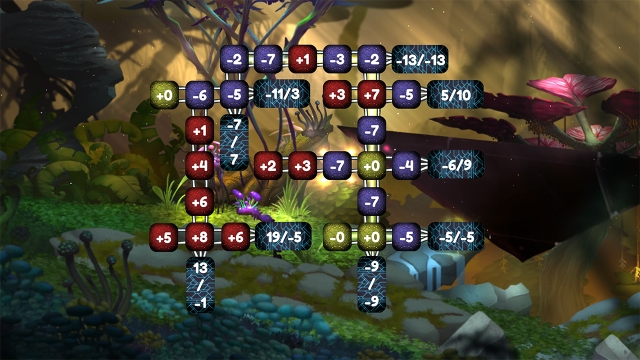 None of that probably sounds terribly exciting, not in a world with thousands upon thousands of other games that let you save a fantasy kingdom, compete in a race across Europe, infiltrate a futuristic military base, or dive into the past to assassinate historical figures from around the globe (just to name a few options). But video games can be all sorts of things, and Energy Balance doesn't try to be anything more than a test for your intellect and mathematical prowess. It's a success in that regard, but difficult to truly appreciate unless you try it for yourself.

Early in the proceedings, the puzzles on offer prove quite simple. Quickly, however, solving them begins to require a bit more effort. By the time you have three or four lines crisscrossing, several with five or six spaces you have to keep in mind, the process feels downright demanding. Suppose your row adds up to a current sum that is 2 less than the objective. You could replace that 3 tile with with an available 5 piece, but what if moving the latter suddenly throws a separate row out of whack? Questions like that arise constantly, and the typical puzzle feels like it's not going anywhere for most of the time you spend with it, before everything comes together and you place those last few pieces with a triumphant cheer (if only on the inside).

Should you convince kids to play it, I suspect they will find Energy Balance to be a wonderful educational tool. You'll probably feel the same way, even if you're well out of your teens and raising a teenager of your own. You can bring along a calculator, sure, but it's much more satisfying to do the required math in your head. You'll have no choice but to grow comfortable with digits if you want to advance to some of the later stages. And who doesn't want to do that? 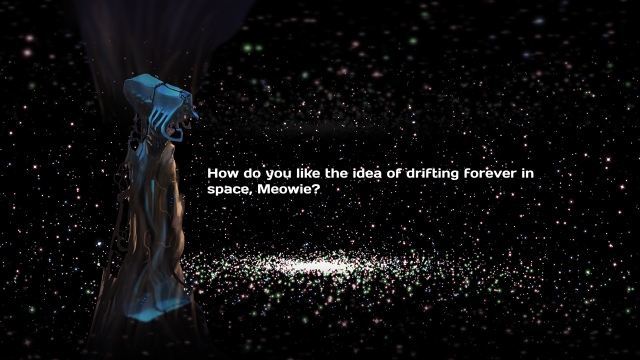 Structurally, there's not a whole lot to Energy Balance, but that's not really a flaw. You'll work your way through 12 stages, each one featuring a slightly different puzzle layout. Clearing the last of those stages unlocks the "hardcore" mode, which offers more complex layouts and asks players to wrangle larger digits. Though it wasn't immediately apparent to me, the number of puzzles available is actually near-infinite. There are only those few layouts, but you can easily reset a stage again and again, each time with different number tiles and target sums that could dramatically change the experience. If you really love wrangling number tiles, in other words, you can remain busy doing so for just about as long as you might want to.

To keep things interesting, the developer also threw in a basic narrative. What it amounts to is that an alien is traveling through space with its cat and must solve puzzles to repair a broken spaceship. There are a few lines of basic, skippable dialogue along the way, and some trippy artwork. If you're into that sort of thing, I guess it's okay, but I didn't feel like the story ever went anywhere interesting and I would have been fine if it hadn't even been included. 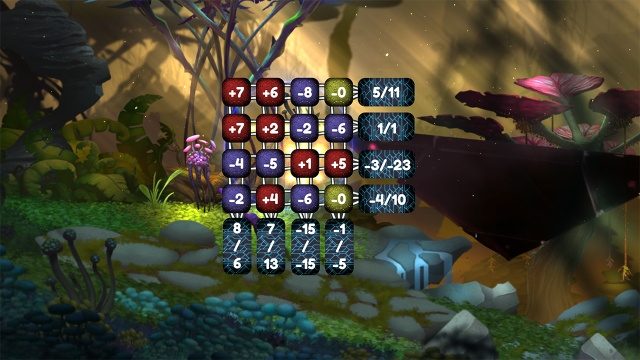 Visually, the game is attractive and (more importantly) effective. The various tiles are easy to distinguish from one another, and it's usually easy to tell where you are succeeding and failing because glowing light outlines everything that's going right in the moment. Background images are quite muted and don't interfere with the puzzle solving, which is how things should be. Aurally, though, the game left me disappointed. There is a selection of several songs, provided by a variety of independent musicians. Their music loops regularly, and isn't tied to your performance that I could see. The problem is that the selections are ambient in nature, and a little too loud and unique for their own good. You can mute the volume in-game, though, which is exactly what I recommend doing. Playing with the volume up never managed to do much but give me a headache or distract me, except when the quiet piano music was playing. I liked that song quite a lot.

So anyway, I doubt I've made Energy Balance sound terribly engaging, but I still had a decent time with it. The puzzles are an excellent test for the mathematically minded (and also for those who would like to become more comfortable with digits), and the low-stress gameplay is a great way to wind down for a few minutes after a hard day of work or play. You can currently purchase the game for a mere $2.99 USD on the eShop, so there's very little risk involved if you decide to add it to your own collection. Maybe you'll like it even more than I did. Heck, maybe you'll dig the music, too!
4/5

If you enjoyed this Energy Balance review, you're encouraged to discuss it with the author and with other members of the site's community. If you don't already have an HonestGamers account, you can sign up for one in a snap. Thank you for reading!

© 1998-2020 HonestGamers
None of the material contained within this site may be reproduced in any conceivable fashion without permission from the author(s) of said material. This site is not sponsored or endorsed by Nintendo, Sega, Sony, Microsoft, or any other such party. Energy Balance is a registered trademark of its copyright holder. This site makes no claim to Energy Balance, its characters, screenshots, artwork, music, or any intellectual property contained within. Opinions expressed on this site do not necessarily represent the opinion of site staff or sponsors. Staff and freelance reviews are typically written based on time spent with a retail review copy or review key for the game that is provided by its publisher.