Just mere minutes into Volgarr the Viking, after making a couple lizard people explode in a mess of bloody bones with the might of a sword, your manly protagonist walks up to the skeletal remains of a man decked out in green arm and head bands. If you don't understand the significance of this fallen warrior's appearance, then... I honestly don't blame you. A shout out to 1987's Rastan, an action platformer starring a very Conan-esque barbarian that spawned two weak sequels before fading into obscurity, this cameo isn't the only nod the 2013 game references. Volgarr can easily be seen as a spiritual successor due to the number of things it takes from Taito's arcade title, from the visible influences in enemy designs and weapons, such as the lizard fighters and flame sword, to the level obstacles where you slide down slopes that include fire pits. Without a doubt, the people who crafted this game are obviously fans of Rastan, as their love for it clearly shines through in the visuals.

If you've never played Rastan, the one thing you need to know is how hard it can get: enemies quickly gang up at random intervals and certain goons can even drain huge chunks of your health with just one or two hits. The final stage even does the bastardly thing of removing the option to continue, thrusting you back to the title screen when all lives are lost. Coming into Volgarr, I didn't think for once that it was going to replicate Rastan's often unfair difficulty, assuming the release would instead be streamlined with modern touches like regenerating health and saving at any time. As I tried my best to defend against numerous lizard men, spiders, and spear traps, however, the title swiftly proved me wrong by killing off my Viking multiple times in the very first of seven stages.


So, Volgarr is just as hard as Rastan? 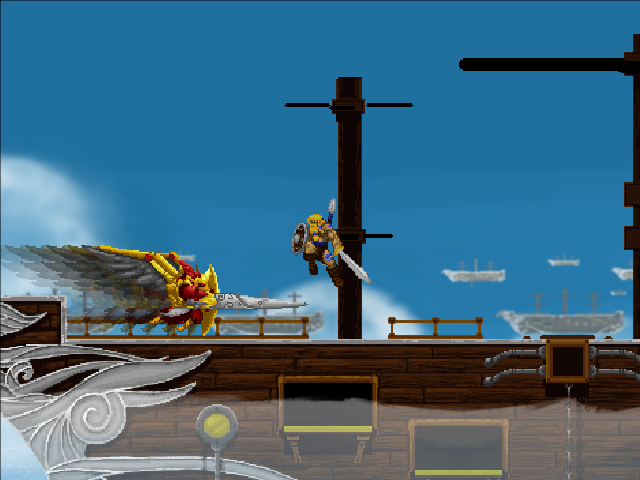 This dawned on me when I spent at least 40 total minutes in the opening jungle stage, 30-some of those minutes spent in the second act's lizard stronghold, and... possibly 20 dedicated to dying. You may be thinking the game also borrows the difficulty curve from its coin-op brethren, but it surprisingly goes in a different direction when giving players a hard time; instead of only using randomly spawning enemies like in Rastan, Volgarr goes for a more methodical approach, kinda like in a Gradius title. Whenever you take a couple steps forward, there's always some kind of obstacle or trap for that particular area which you must pass in a peculiar manner. Whether it'd be dodging multiple, far away projectiles, jumping over fire pits that spit fireballs in patterns, or annihilate a rushing gang in the correct attack order due to their different movements, Volgarr puts you through the ringer with every push towards a boss fight.

While Rastan may be the game's biggest influence, the devs also clearly borrow a few choice things from the Ghosts 'n Goblins franchise, contributing to its harsh difficulty. In place of Rastan's health bar is an armor loss system, where your shield and badass helmet, gained from chests, can be gone in an instant with a small injury. Another gimme is the jump-double jump mechanic. You know the one I'm talking about, where you can't change the direction or speed after leaping. And yes, this means there's going to be several tricky jumps as you inch your way to the final stage.

As you may have taken away from previous paragraphs, Volgarr isn't something you can pick up and have a relaxing time with, but instead a game you have to be in the mood to play. This point is further driven home with the fact that there's no way to save, and even though there's a weird, "hidden" level select, you gotta play the game the straight way for the real climax. There's a checkpoint system, but it's sparsely implemented: there's one at the start of each stage and at the second acts' entrance. That's it. I should emphasis that the second acts not only consist of a gauntlet of hurdles to endure, but you're then expected to battle the pattern-frenzied bosses immediately after. Thankfully, you do get unlimited tries, as I'd imagined having a restricted life count would transform this into a very masochistic experience. 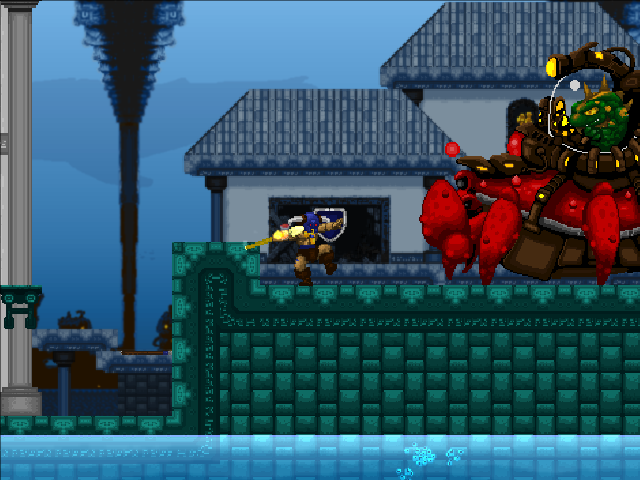 I've made it very clear up to this point that Volgarr is a pretty grueling title, but would you believe me when I say that it's also one of the most reasonable, well-polished hard games I've played? Because it is. Sure, you have to learn your way through the journey, knowing how specific enemies react and how upcoming sections function, like the fish men that slide towards you or having to navigate safely through the propellers of a sky fortress, but it never gets to the point where you feel like the game is cheating you. Volgarr, as I recall, doesn't have any cheap traps that spring up out of nowhere after you pass a tough segment, and you can't ever use the excuse of not knowing what's coming up next, since the devs also give you the ability to zoom out temporarily.

The creators also did a fantastic job with the layouts and designs of the stages, as they really know how the games in this genre function, fine-tuning to the point where they expect players with past experience to know how to "solve" a solution. Every single thing you need to advance in Volgarr is explained in the super brief tutorial at the start, from throwing spears that can be used as platforms, to the rolling mechanic that gets you in tight spots; they just continue to build and build on these foundations, eventually putting you into tense situations. You see a chest in a corner, and the only way to reach it is to roll through a small opening that ends over a fire pit, leaving you to think, "They don't expect me to do that, right?" They do.

Most of Volgarr the Viking is like this, and it clicks because there's no technical problems that get in the way and there's next to no faulty design choices. Interestingly, that's possibly a reason some players might have an issue playing this game, not because it's a tough one, but because it's not a title you can easily manipulate to your advantage. Volgarr is one of those unusual instances where it seems to be well-designed and play tested to hell and back to the point where you have no choice but to play it the way it's intended, though someone probably already proved me wrong with a speedrun video floating around on the Internet. 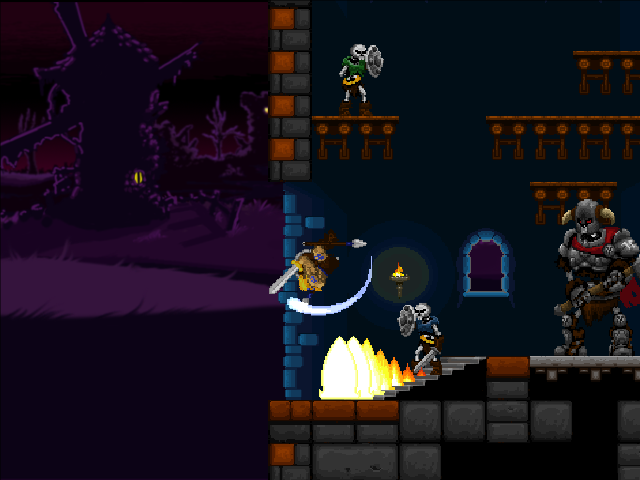 That's not a knock against the game; I enjoyed my time being a Viking in its unforgivable environments, but not before having another Five Stages of Contra: Hard Corps episode. However, the difficulty and "restraints" means it's not a game for everyone, especially in a generation that's more used to casual and accessible titles. Though, if you're pining for a new game with an oldschool, tough-as-nails mindset, then this comes highly recommended. Not only is Volgarr the Viking a great tribute to games of old, but it actually transcends its main inspiration in nearly every way to form its own legitimate identity.
4/5

If you enjoyed this Volgarr the Viking review, you're encouraged to discuss it with the author and with other members of the site's community. If you don't already have an HonestGamers account, you can sign up for one in a snap. Thank you for reading!

© 1998-2021 HonestGamers
None of the material contained within this site may be reproduced in any conceivable fashion without permission from the author(s) of said material. This site is not sponsored or endorsed by Nintendo, Sega, Sony, Microsoft, or any other such party. Volgarr the Viking is a registered trademark of its copyright holder. This site makes no claim to Volgarr the Viking, its characters, screenshots, artwork, music, or any intellectual property contained within. Opinions expressed on this site do not necessarily represent the opinion of site staff or sponsors. Staff and freelance reviews are typically written based on time spent with a retail review copy or review key for the game that is provided by its publisher.