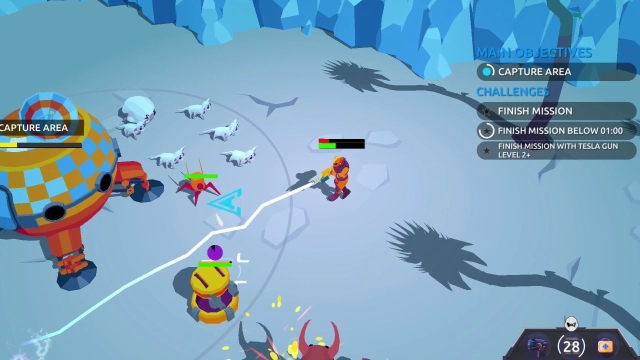 Space Pioneer provides plenty of straightforward action. In each level, you land on a planet, complete basic objectives and gun down aliens in droves. When you're done, you head back to the landing zone and move on to the next stage to begin the process anew. Although this setup sounds monotonous, something beckons you to keep playing for hours. You may not realize it, but at every turn this game rewards you, thus motivating you to either advance the campaign or replay levels in the hopes of snagging more goodies.

You see, this title showcases a weird, RPG-ish upgrade system where you spend money and item-specific cards to strengthen your equipment. For instance, if you want to power up your armor, you need a certain amount of credits and armor cards. You earn money and additional cards by performing just about any task. For instance, dead aliens and successful mission objectives drop coins, and finished levels offer random upgrade cards. Outside of stages, you can also navigate the numerous menu screens to a special objective page. There, five boxes grant prizes for completed side jobs, netting you even more commodities. Plus, there's a trophy room that gives you gifts when you hit various milestones. When you kill enough foes, earn enough gold or boost certain pieces of equipment enough times, you gain additional upgrade cards. Needless to say, this game really showers you in presents.

Every time you check these screens, you notice that you're just one step away from getting some goodies. That's when you put off going to bed so you can grab a 500-credit reward for strengthening your Tesla gun, or obtain five random cards for offing 50 creatures with a shotgun, or plan to vaniqush the next three bosses with the pulse carbine for a sweet trophy and the cards that come with it. 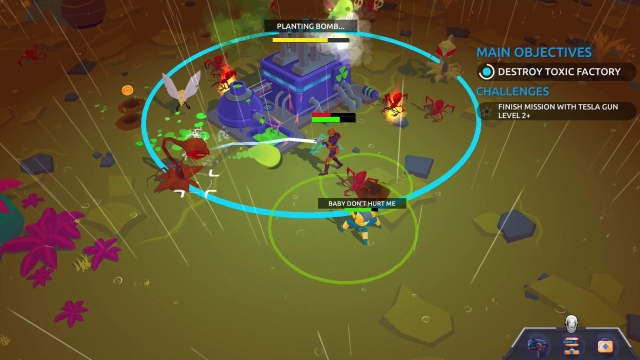 Even the levels themselves offer additional rewards in the form of stars. Yeah, you've probably played your share of free-to-play puzzle games that evaluate your performance and grant you a certain number of stars out of three, but Space Pioneer handles this concept more effectively. You earn each star by completing alternate objectives, and you don't need to get all three stars in a single visit. Any time you clear one of these goals, the star attached to it becomes yours for good.

I know, earning golden stars sounds very much like first grade. Still, there's something satisfying about finishing a level in under two minutes and obtaining that fat, shiny, five-pointed badge. Granted, these things are nothing more than a pat on the back, but they still push you to finish a level with a shotgun instead of a more ideal weapon, or eliminate a certain number of adversaries before leaving, or keep your hit points above forty percent.

For around thirty glorious, rudimentary levels, this routine works so well that it distracts you from some of the game's shortcomings. You don't even notice there is no story, or that the stages are empty arenas full of nothing. Exploration only begets the occasional artifact that technically does nothing, and the only factors that separate one level from another are the terrain type (desert, tundra, volcano and jungle) and the objectives offered. Even then, you burn through familiar tasks ad nauseam, plus fight the same monsters repeatedly. 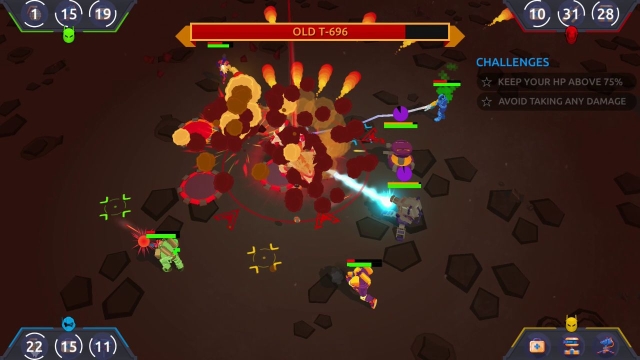 Eventually, you begin to notice Space Pioneer's shallowness. Yeah, it loads you up with lots of guns, skills and sub-weapons (called "gear") to enhance, including flamethrowers, grenades, mines, orbital bombs and assault rifles. However, you only upgrade these goods so you can advance to new levels that are identical to every stage you've explored up to this point, with boss encounters representing the only breaks in the pattern. And even those don't offer fresh content because all of the bosses are enlarged versions of standard foes.

The further you progress into the campaign, the more tedious and tiresome the game becomes. Eventually, creatures grow so powerful that some of them can one-shot you, plus stars become more difficult to earn. For instance, some stages require you finish the whole shebang in a ridiculous amount of time, like under a minute. Bear in mind that most quest objectives demand that you to hold still in a circle for a set amount of seconds while hordes of the aforementioned one-shotters bear down on you. The only way to actually complete these jobs is to grind and farm for hours and improve your stuff beyond a reasonable level.

That might sound like a simple task, but you're at the game's mercy every step of the way. Eventually, each item needs tons of cards and money in order to boost it one level, and you'll have to play for hours and hours just to get the necessary funds and resources. Remember, the cards you nab are always random, so you may not get the ones you want in short order. Worse than that, you'll find it tricky to earn more than two hundred coins per stage, which barely covers the thousands required to bolster your duds and arms. 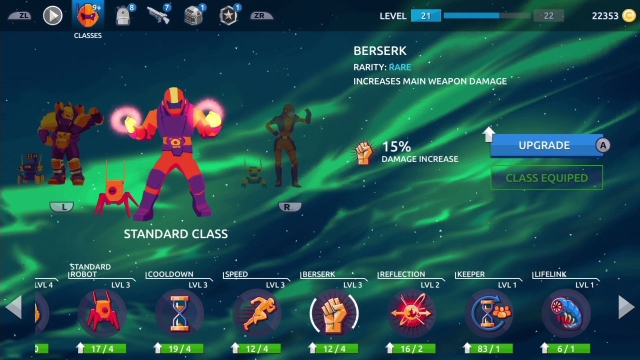 The longer you play, the more you run into technical flaws as well. For instance, a few levels feature whole fields full of coins. When you encounter this phenomenon alongside large crowds of enemies, the game lags so terribly that you wonder if the game is on the verge of a crash.

During my own playthrough, I also bumped into a few bugged quest objectives. One involved eradicating a certain number of aliens from a den, and one target never spawned. I ended up restarting the stage because of that. Numerous boss fights offered a special objective that read "don't let your weapon overheat." During practically every boss, I overheated my weapon multiple times, and not once did the game disqualify me from finishing that task. Another side objective told me to deal at least 50% damage to a boss using gear. However, I didn't earn the reward until I stripped off most of his hit points. Last I checked, four-fifths is not 50%.

Finally, I reached a point where I just wanted to be done with this nonsense. The game's combination of copious rewards and simple mayhem didn't hold up for 60-plus levels. Hell, it barely held up for half that number. It's funny, because beating the final boss unlocked an endless mode, where I challenged the same boring levels for eternity. Maybe if Space Pioneer had offered some variety, its simplicity would've been welcome. Without that necessary component, though, we're left with just another repetitive, tiresome, forgettable action game.
2.5/5

If you enjoyed this Space Pioneer review, you're encouraged to discuss it with the author and with other members of the site's community. If you don't already have an HonestGamers account, you can sign up for one in a snap. Thank you for reading!

© 1998-2020 HonestGamers
None of the material contained within this site may be reproduced in any conceivable fashion without permission from the author(s) of said material. This site is not sponsored or endorsed by Nintendo, Sega, Sony, Microsoft, or any other such party. Space Pioneer is a registered trademark of its copyright holder. This site makes no claim to Space Pioneer, its characters, screenshots, artwork, music, or any intellectual property contained within. Opinions expressed on this site do not necessarily represent the opinion of site staff or sponsors. Staff and freelance reviews are typically written based on time spent with a retail review copy or review key for the game that is provided by its publisher.