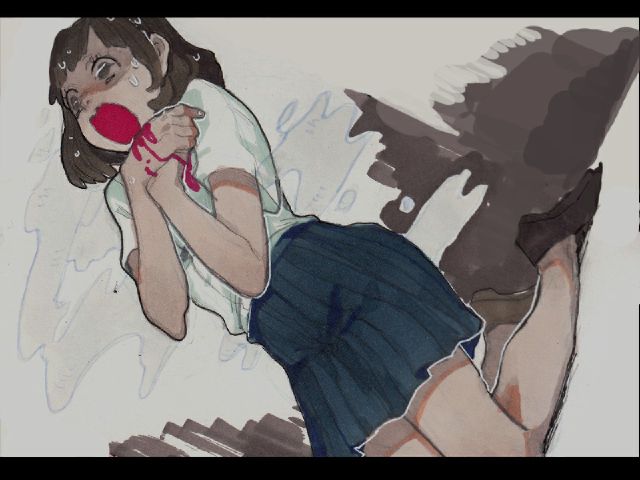 The horror genre is old and often retreads concepts as a result. Sometimes such revisits of aged ideas earn the scorn of fans like myself, and we chide content creators for not feeding us original material. Meanwhile, we eventually tuck into derivative products that delivered the goods despite their lack of innovation. This might seem hypocritical, but the truth is there is no magic bullet when it comes to creating quality horror. You can churn out the most unoriginal dreck and still garner either a small fanbase or fierce defenders. On the flip side, unique pieces can still be questionable, even if they bravely explore unfamiliar themes or conventions.

Kio's Adventure snugly falls into the latter category, as it's an original game with some memorable moments. However, as a piece of horror entertainment, it peters out after you crawl past the midpoint. It kicks off with three teenage Japanese girls visiting a fast food joint. There, they chat about high school and boys, only to be rudely interrupted by an earthquake. One of them, Kio, awakens in a musty old dungeon, with neither of her friends in sight. Straight off, the campaign raises questions and captures your interest, beckoning you to continue so you can get some answers.

However, the early phases only conjure another question: WHY? This arrives after an ordeal that sees you escaping a spiked wall that attempts to crush you, only to end up in a torture chamber where you find one of the game's minor characters buck naked, strapped into a guillotine. They only have enough time to give you quick instruction before the blade falls, severing their head and leaving a geyser-like stump that sprays blood everywhere. After that, you view a few more horrific scenes before coming across an immense mound of writhing flesh, not to mention slithering, worm-like creatures apparently made out of human body parts. And all you can ask is Why? There's no rhyme or reason; it's all just random scary and nasty things happening one after another, from torture porn to haunted hallways. 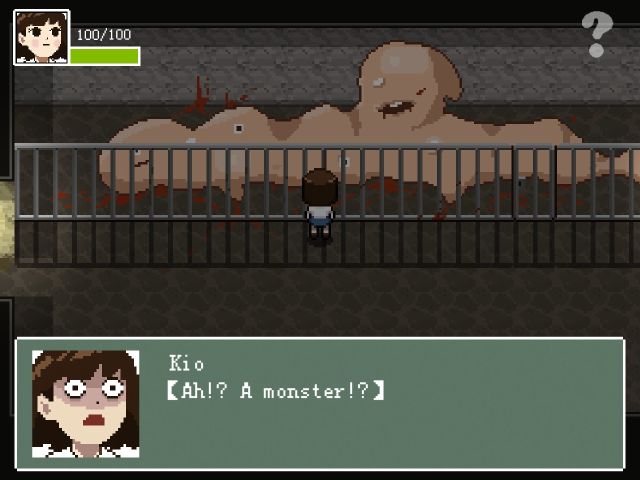 Although these opening segments present some truly unnerving material, they lose their bite with each line of poorly translated dialogue. At first, the clumsy chatter easy to ignore, but then you start having Breath of Fire II flashbacks. For the most part, you can tell what the characters are saying, and that's good enough. Still, it's awkward reading a line like "We've got here long before you" and trying to "retranslate" it in your head as "We've been here a long time."

As this is a survival-horror affair, you often receive the option to gun things down or run past them. That might seem problematic, as this title is a 2D job akin to RPG Maker fare (it was made with Unity, if I'm not mistaken). Thankfully, Kio sports tight mechanics that make either choice viable. Aiming your gun is no issue because both collision and response are on point. Plus, enemies never move so quickly or appear in such numbers that you can't evade them if you're careful.

And therein lies part of Kio's problem. It doesn't matter if you're up against the aforementioned flesh worms, zombies that litter the landscape, or spider-like humanoids, you can easily slip past pretty much anything except for creatures that cheaply appear before you have a chance to respond to their presence. You read that correctly: the game only manages to challenge you by sneaking in cheap shots. Granted, you'll encounter a couple of other legitimately tricky moments, like attempting to sneak past a psychotic nerd or battling the final boss. Nonetheless, the lack of imposing villains leaves this experience feeling rather toothless. 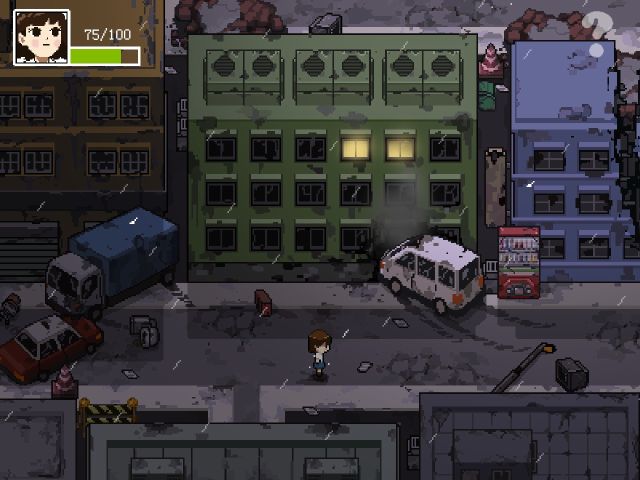 At the same time, it's hard not to enjoy certain bits of this adventure because it's unpredictable and just plain weird. You never know what you're going to bump from one point to the next. You might enter a room filled with poison gas, where life-sucking specters wait for you to draw near to them, or could stumble upon a chamber that contains nothing but a giant, severed hand that does nothing. It's only there to make you mutter WTF? However, meaningless encounters like these shouldn't deter you from exploring, because sometimes you locate ammunition for your guns, first aid kits, or event items by thoroughly searching stages.

Of course, sometimes your diligent work leads to nothing of value. Eleven hidden rooms lie throughout the various locales you visit, serving partly as Easter eggs and partly as bad jokes. One such chamber requires you to off a couple of monsters and touch a bloodstain. That crimson smudge teleports you to a white room with a smiling man who informs you that your surroundings are made of sperm. O...kay? Other places take you to collections of characters that you may or may not recognize from other works, who serve no purpose aside from dispensing useless flavor text. 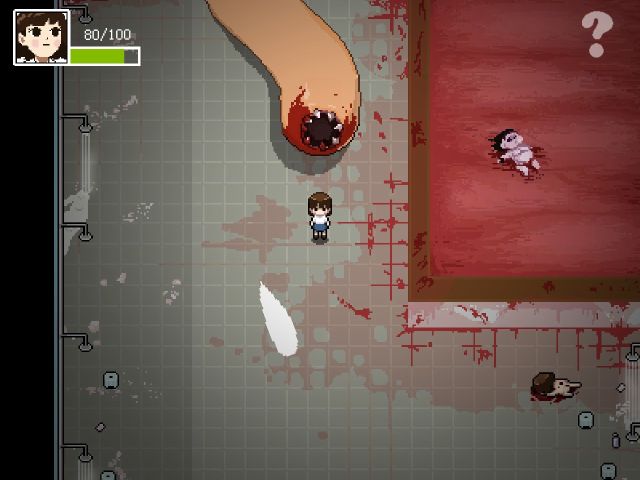 The farther you advance in this quest, the more surreal it becomes. Eventually it breaks the fourth wall a little, then drives a semi through it. Things stop being scary and begin verging on silly, and that's when Kio loses its grip. Everything you've been through comes across as a bunch of arbitrarily spewed plot devices without much meaning. On one hand, the game's stream-of-consciousness storytelling leads to peculiar and wonderfully odd content. However, you might not be able to shake the impression that you've just been through a tale without any sort of cohesion, like waking up from a fever dream.

Yet, I don't know if I should be thankful because I had the opportunity to play through such an oddball adventure, or disappointed because its weirdness added up to nothing grand. No, Kio's Adventure isn't a terrible game, but it leaves something to be desired nonetheless. Strange-yet-ho-hum titles like this treat uniqueness as if it's a golden ticket for throwing out any idea that comes to mind, and execution be damned. In actuality, it doesn't matter if you craft a horror piece out of familiar tropes or off-the-wall concepts, because writers and developer still need to account for effectiveness. In that respect, Kio is all over the place. Sometimes it hits hard with vicious and gruesome delights, but occasionally loses its punch when things get goofy. There's a fine line to walk between silly and frightening, and some works walk it graciously. This one, however, stumbles drunkenly along it, but never totally falters.

If you enjoyed this Kio's Adventure review, you're encouraged to discuss it with the author and with other members of the site's community. If you don't already have an HonestGamers account, you can sign up for one in a snap. Thank you for reading!

© 1998-2021 HonestGamers
None of the material contained within this site may be reproduced in any conceivable fashion without permission from the author(s) of said material. This site is not sponsored or endorsed by Nintendo, Sega, Sony, Microsoft, or any other such party. Kio's Adventure is a registered trademark of its copyright holder. This site makes no claim to Kio's Adventure, its characters, screenshots, artwork, music, or any intellectual property contained within. Opinions expressed on this site do not necessarily represent the opinion of site staff or sponsors. Staff and freelance reviews are typically written based on time spent with a retail review copy or review key for the game that is provided by its publisher.