Theres a level of simplicity surrounding Bullet Soul that could disarm you. Its still a bullet hell, so you can still expect to find skies filled with projectiles to weave through, but its significantly more forgiving than a lot of its more sadistic brethren. Its of little exaggeration to note that you could probably complete the first level pretty comfortably if you just park your craft on the bottom of the screen, weigh down the fire button, then wander off for a few minutes. Youll probably return later to find yourself unscathed. That ludicrous level of ease certainly wont last, and cowering at the bottom of the screen will lose you thousands of delicious points, but its a unique claim to be made in a genre adored for its level of merciless difficulty.

Several things conspire to make sure everything but you winds up dead. Theres three ships to choose from, but even the weakest offensive unit bereft of any genre-obligatory power ups covers the screen in crisscrossing laser that almost guarantees anything brave enough to scroll on-screen is going to get shot - whether you aim at it or not. Fighter craft packing heavy firepower at level zero is certainly a perk, but what stands out more is that destroying enemy ships also cancels out their projectiles. In this opening stage, where the enemy is lightly armoured and almost impossible to miss, this means youll be cancelling out any form of offense before it has half a chance to become a threat.

Hiding at the bottom of the screen wont help you hunt down high scores, though; Bullet Soul has no complex scoring or combo method  it has a rising multiplier bar that you can fill by destroying enemy craft at point blank range. Rarely has a game been so insistent on an overly-aggressive play style; parking right in the faces of hostile ships not only dials your score up considerably faster, but allows you to destroy targets quicker and thus banish all their bullets from the screen. Some playable ships even come attached with melee options, such as a huge plasma drill grafted to the nose of their craft. Just in case the subtlety wasnt completely mashed into the ground. 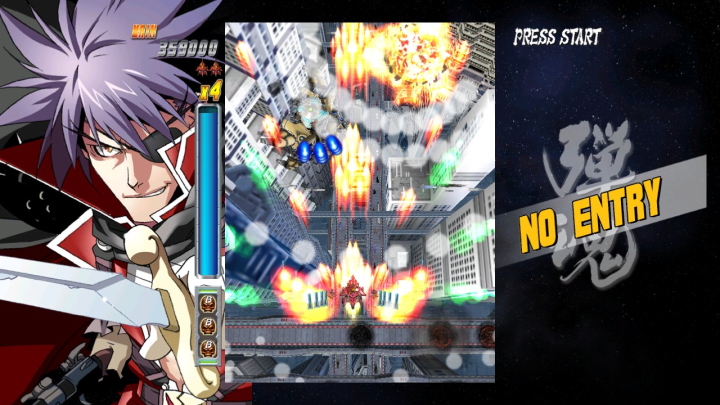 Things do get considerably harder as you delve on, but, with such an easy start and only five levels to play through, I found myself one crediting Bullet Soul very early on (which leads to a second loop and the true boss, so that was ego-affirming). Outside the second loop, which plays like a hard mode, (which really could have benefited from being selectable once unlocked), Bullet Soul uses its short life span to highlight some pretty clever ideas. For example, levels are absolutely coated in hidden bonuses. Some of these are easy to find; stray into an asteroid fields and find some of the larger chunks have structures built on them. Blow them up for extra points! In the first level, giant spider bots crawl up the sides of buildings in an attempt to get to you and, sure you could be boring and just blow them up yourself. But your dullard attitude has cost you again! Why not destroy an adjacent tower block to fall on its head instead?

Hunting down these bonuses quickly became a staple of any points rush run I took on. Due to your wide spread of laser, youll sometimes trigger them by accident, like destroying an enemy freighters cargo, or blowing up flashing green power storage units peppered across an asteroid base. But some of the them are surprisingly deceptive. On the same base stage, parts of the asteroid are patched together with metallic clamps which you can blow up, causing the ground to break away, condemning any units housed upon them to drift impotently out into deep space. A mid boss fight initially pits you against a huge mech tank that gets in maybe a second or two of offense before a massive alien bug shunts it aside to attack you in its stead. The bug spits out swarms of bullets from low on the screen, giving you little room to maneuver. Still, a confident player can ignore him for a while and try to blow up the tank wreckage thats *just* visible on the edge of the screen for another bonus points package.

Bullet Soul throws boss fights at you hard and often. Sometimes theyre like the bug interloper where theyll go down quick but give you non-stop barrages of acid spit and plasma waves. Mainly, theyre massive wars of attrition where you need to destroy a hulking enemy part-by-part, slowly whittling it down into nothing. Huge screen-filling battle carriers with laser cannons several times your size can be beaten by just pummeling them head on, but you can improve your chances (and still damage your foe) by taking out its mammoth armaments one by one. Some craft have secondary weapons that will let you lock on laser streams or feather systems which let you single these targets out while you frantically dodge. 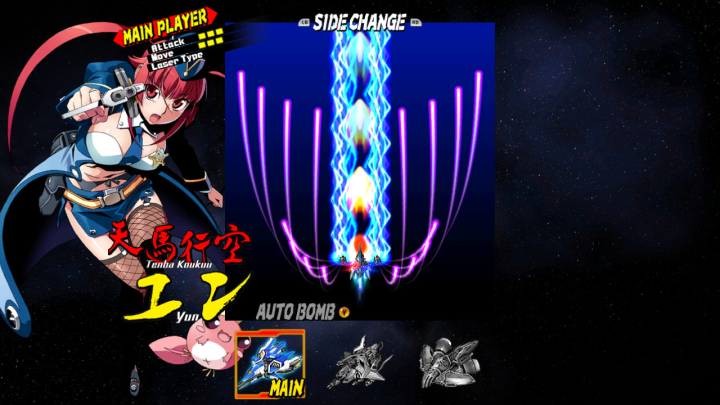 The hidden fourth ship comes exclusively in the games B mode, which seems to be more of the same with different formations and bullet patterns that make the entire thing seem a little easier. Significantly, this means that the PC strain of Bullet Soul comes complete with all the DLC add ons from the original XBox 360 release sans Infinite Burst, which was more or less a re-writing of the games core mechanics. So, yeah, none of that; instead, youll just have to make do with a timed score attack mode as well as the option to take each stage on one by one to try and increase your scores, both locally and globally, and earn swanky new medals.

Im sitting in the top ten of many of the global scoreboards (at time of writing; the scene remains quite lively and a challenger is always approaching) but Im still constantly diving back in to try and chip away at high scores on the belief that I could kill that boss a little bit quicker, or use up less screen clearing bombs and reap end-level rewards for remaining stock. Bullet Soul doesnt have the crippling difficulty of a Cave bullet hell, and barely plays lip service to any of its plot (it doesn't even bother translating the Japanese voice overs that try to explain it in the space of a few seconds). Its a different kind of hell, a more forgiving and perhaps more accessible version. But its still quite keen to kill you with a screen full of neon glowing bullets. It will still often succeed.
4/5

If you enjoyed this Bullet Soul review, you're encouraged to discuss it with the author and with other members of the site's community. If you don't already have an HonestGamers account, you can sign up for one in a snap. Thank you for reading!

© 1998-2020 HonestGamers
None of the material contained within this site may be reproduced in any conceivable fashion without permission from the author(s) of said material. This site is not sponsored or endorsed by Nintendo, Sega, Sony, Microsoft, or any other such party. Bullet Soul is a registered trademark of its copyright holder. This site makes no claim to Bullet Soul, its characters, screenshots, artwork, music, or any intellectual property contained within. Opinions expressed on this site do not necessarily represent the opinion of site staff or sponsors. Staff and freelance reviews are typically written based on time spent with a retail review copy or review key for the game that is provided by its publisher.