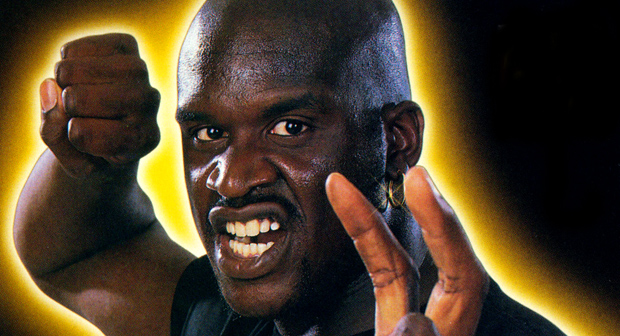 Legends and anecdotes speak of wasted afternoons and misspent allowances associated with Shaq Fu. Aged gamers have shed gallons of tears whilst lamenting Christmas and birthday parties the game ruin, after it was (most likely) purchased from a bargain bin by a non-gaming relative. Although I should have heeded the whining and bickering, there's a part of me that loves punishment and must discover the truth about horrible past releases for myself, no matter the toll it takes on my sanity. So it is that my subconscious devised a most painful project for me: instead of facing off against the standard console version of Shaq Fu, I would nab the portable iteration. That way you're sure to experience maximum suffering! said that hostile inner voice.

Now that I have experienced what everyone seems to regard as Mr. O'Neal's gravest sin, I can only express how deeply disappointed I am...

I was made to understand that Shaq Fu is abysmal. However, what I played was just plain shoddy. I didn't feel a piece of my soul die, or wish for my time back. I just thought, "This is the worst you've all got? Have any of you played Cheetahmen II or the Commodore 64 rendition of Muppets: Chaos at the Carnival?" Those are games so bad they would be denied entrance to hell. 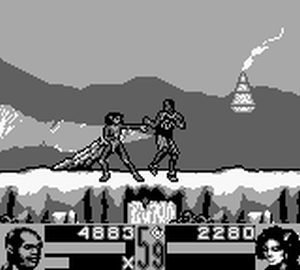 That's not to suggest that the portable rendition of Shaq Fu is brilliant, mind you, or even mediocre. It features only a fraction of the console's roster, including Shaquille himself, the cat girl Kaori, an Indian warrior named Rajah, a grim reaper-looking creature called Mefis, the priestess Voodoo, the monster Beast (such mind-racking originality...), and the main antagonist, Sett. I find it comical that the game provides you with this underwhelming list, only to further dismay you by forcing you to use Shaq in its campaign. Yes, I understand that it's his game, but why program such a motley crew only to limit players to one character?

The good news is the game is quite speedy and functional, given that it is a stripped down port. Matches are furious and quick, with punches and kicks landing in such rapid succession that the action can confuse. Of course, part of that is due to wonky collision detection, which allows fighter sprites to just about overlap. Combine that with Game Boy's diminutive screen and result is lots of squinting. Regardless, I was able to acclimate to the game and start kicking tail pretty easily.

One thing I noticed was that taking damage fills a "Fury Meter," which allows you to pound the opposition with a doubly powerful smack. You have to be careful, though, because Fury also lowers your defense rating, making it a snap for your adversary to take you out. Of course, this principle goes both ways. You can breeze through some combatants by punching them into a fury and then laying into them with devastating blows. 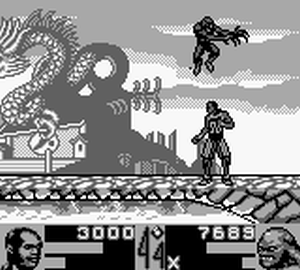 My own primary strategy was to get close to an opponent and mash one of the attack buttons. This was an effective means of dropping suckas in the early stages of the campaign, but it proved useless later on. That's when I really had to step up my game and modify my plan to something more complex: crouching and repeatedly kicking. No, seriously. I soundly defeated the last few opponents, even the final boss on the Normal difficulty setting, almost entirely by ducking and spamming Shaq's kick (only stopping occasionally to reposition myself).

Special moves? Yeah, this version has them. However, they're almost impossible to figure out without a manual or a FAQ. They're a liability, anyway. Shaquille does have one projectile maneuver, but it's difficult to get it to register and it's useless anyway because the computer rarely stays at a distance. More than anything, executing this fancy tricks leaves you susceptible to strikes.

It's sad enough when specialty offense doesn't work out in a fighting game, but even worse when the age old trick of leaping through the air and executing a flying kick rarely connects. Typically, the game's floaty physics send you sailing over your enemy's head so that you switch sides on the screen. Landing a strike while in midair requires a perfect storm, thereby grounding almost all of the combat.

Honestly, I think you could play much worse fighting games than this. Sure, Game Boy Shaq Fu is terrible, but I will admit that I got a kick out of hammering away on some of the basketball star's rivals. I mean, each battle ends with O'Neal admonishing the losing competitor while the defeated soul exudes melancholy. 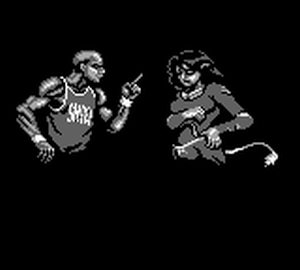 ...but I digress. Portable Shaq Fu commits mostly familiar errors: odd collision detection, useless special moves, dumb AI, and strange jumping mechanics. In spite of the preceding list, it's quite playable, but you can tell it's not a quality product just the same. I guess what I'm trying to say is that instead of avoiding this game at all costs, maybe you should consider politely ignoring it. There's a lot of poor design on display here, but hardly anything detestable.
2/5

If you enjoyed this Shaq Fu review, you're encouraged to discuss it with the author and with other members of the site's community. If you don't already have an HonestGamers account, you can sign up for one in a snap. Thank you for reading!

© 1998-2020 HonestGamers
None of the material contained within this site may be reproduced in any conceivable fashion without permission from the author(s) of said material. This site is not sponsored or endorsed by Nintendo, Sega, Sony, Microsoft, or any other such party. Shaq Fu is a registered trademark of its copyright holder. This site makes no claim to Shaq Fu, its characters, screenshots, artwork, music, or any intellectual property contained within. Opinions expressed on this site do not necessarily represent the opinion of site staff or sponsors. Staff and freelance reviews are typically written based on time spent with a retail review copy or review key for the game that is provided by its publisher.