Two students named Ryan attended the same one-room school as me while I was in the third grade. One of them was four years ahead of me, and he exuded cool without even trying. Sometimes, he let me borrow crummy licensed NES games like The Karate Kid and Top Gun, or occasionally even something better like Super Mario Bros. 2 or Excitebike. The other Ryan did no such thing. He was a grade or two behind me, and nearly everyone treated him quite poorly (myself included).

When you live out in the middle of nowhere, as I did, your choice in friends is made for you. If you want to be entertained, you either develop a love for books and video games or you head outside and look for the neighbor boy. Faced with that choice I went with the former option. My mom, however, believes too much time indoors is bad for the pre-teen soul. Thus, I was sometimes expelled from our single-wide mobile home and forced to seek adventure among the sagebrush and juniper trees. On at least one occasion, an impromptu banishment led me to meet up with Little Ryan on a lazy Sunday afternoon.

Ryan lived in a blue, two-story dwelling not more than a half-mile down the road in the direction opposite his cooler counterpart. Im not sure when the house might ever have been in good shape, but a long string of renters with pets and healthy nicotine addictions had over the years turned it into a bit of a dump. As a third-grader, I was vaguely aware of such things, but I didnt pay much attention to interior design because Ryan and his family had an Atari and a Frogger cart.

Whenever I play a new version of Frogger, I cant help but think of the half-hour or so that I spent with Ryan on one particular spring afternoon, playing the old Atari version of that classic arcade title. I remember the joystick I held in my hand--which felt like a flight simulator stick, so Im not even sure now what it might have been--and I remember the simple sound effects and the way the vibrant colors glowed eerily on the old tube set. It was a magical moment. Suddenly I wasnt thinking about how Little Ryan was annoying, or that it was hot outside, or that I could be playing NES instead if only my mom werent insistent that I do something else. Ryan and I were two adventurous frogs, taking turns hopping around on floating pads in a swamp, and thats all that mattered until finally it was time to go home.

Over the years, Konami has tried numerous times to capture the old magic that made the original release and its early home ports so special, but I dont think the company will ever truly succeed. Too many of the people who might enjoy Frogger in the 21st century are folks like me who were first exposed to the franchise in the 80s. The games value lies in its ability to transport returning veterans to the nearly forgotten moments of our youth. Repeated efforts to rework the game in a manner that makes it relevant to a new generation tend to change too much in the process.

Frogger Returns, a WiiWare update from Hijinx Studios, isnt overly determined to make Frogger exciting to a new audience. In some ways, that lack of ambition leads to greater success. Unfortunately, faithfulness to the original source material also prompts the uncomfortable realization that actually, Frogger isnt the great game that sometimes loops through our memories. 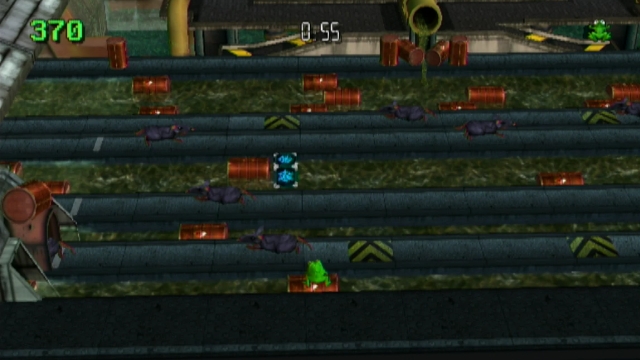 In any conventional version of Frogger, the simple goal is to lead a frog across some streets and a bit of swamp water, so that he reaches safety offered by lily pads on the far side of the map. In the early days, that process played out on a single static screen. Clearing the same stage a few times simply produced more difficult obstacles within that same space (such as alligators to replace the innocuous logs that initially provided the means to cross fatal swamp water).

Frogger Returns updates the formula by adding several new distinct environments to supplement the familiar road and stream combo, including a proper sewer, a factory, and what appears to be a train station. The screen now scrolls vertically, as well, and power-ups that make it easier to advance past new obstacles such as rabid bulldogs and scorching vapors. You can briefly freeze time by grabbing a helpful crate, for example, or find a shield that renders you invincible. Such updates are joined also by more detailed models that bring the original board to life while also feeling true to the source material.

When you tire of chasing the score in Arcade mode, you can turn to Time Attack, where you rush to clear a level as quickly as possible and set a new record. Other single-player modes include Score Attack (which isnt very interesting until youve posted a few of your own times to try and improve upon) and Free Play. That last option is great for people who just want to practice in a non-stressful manner, since its impossible to run out of lives, but the lack of a threat removes any incentive to play competently. 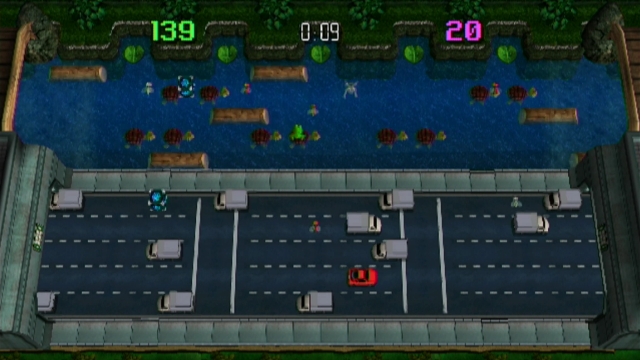 Frogger Returns also features multi-player modes, which I was finally able to talk my wife into playing with me. Im glad I did, as those diversions are actually rather enjoyable. In Classic Race, your objective is to place more of your frogs on pads than your competition does, which adds some nice tension if your rival takes the event seriously. Territories mode provides a generous timer and then encourages two frogs to battle it out for territories. Simply claiming a lily pad doesnt mean youll still have it by the time a round ends. The final two attractions are competitions to consume the most flies. In Collector, you grab as many of the tasty morsels as possible before tagging a pad. Fly Feast is a straightforward contest to see who can gobble down the most flies before a timer ticks down to zero, and it can grow quite frantic if both players are similarly adept at avoiding hazards.

The multiplayer modes work very well and feel true to the arcade original. Areas are static, which is nice, but I did notice that you have to guess at the actual edges of the map. Too often, I would hop on a log and start riding it, only to mysteriously die because I reached the arbitrary edge of the area (even though it seemed like the stream filled another few inches of on-screen real estate in either direction). That quirk is easily adapt to within a game or two, however. Both players also need only a Wii Remote to participate, since everything is controlled with the d-pad. Thats especially nice because it keeps the barrier for entry as low as possible.

By providing a faithful take on the classic Frogger formula, Frogger Returns is able to offer a simple but enjoyable experience that should appeal to gamers both young and old. However, the central design mechanics no longer are sufficient to hold a persons interest for as long as they once did. Konami offers the game on the Wii Shop for only 500 points (about $5.00), an entry fee that is affordable enough to make the game a decent investment for people who might want to relive some memories or introduce a classic experience to their children on a convenient platform. Anyone else should probably steer clear, though, or perhaps seek out some other version of the game.
3/5

If you enjoyed this Frogger Returns review, you're encouraged to discuss it with the author and with other members of the site's community. If you don't already have an HonestGamers account, you can sign up for one in a snap. Thank you for reading!

© 1998-2020 HonestGamers
None of the material contained within this site may be reproduced in any conceivable fashion without permission from the author(s) of said material. This site is not sponsored or endorsed by Nintendo, Sega, Sony, Microsoft, or any other such party. Frogger Returns is a registered trademark of its copyright holder. This site makes no claim to Frogger Returns, its characters, screenshots, artwork, music, or any intellectual property contained within. Opinions expressed on this site do not necessarily represent the opinion of site staff or sponsors. Staff and freelance reviews are typically written based on time spent with a retail review copy or review key for the game that is provided by its publisher.