Rising Win Tech, the publisher of Swallow Up on Nintendo Switch, bills the title as a "hyper casual game," which I suppose is as good a label as any. It's presently listed on the eShop with a standard price of $7.99 USD, and I feel like if there's an obstacle for anyone, that would be the one. People tend to like their casual games to cost a fair bit less, or even to be free (perhaps supported by ads), so a semi-premium entry fee could make for a tough sell if the product in question isn't terrific.

The simple goal in Swallow Up is to move a ball around a small, square field that is tilted a bit so it resembles a baseball diamond. In that playing space are positioned a bunch of white blocks which are magnetically attracted to your ball. You want to gather those while avoiding the blocks of another hue. If you touch anything other than the area border or one of the white blocks, you have to start the stage over again.

Presentation is kept very simple indeed. The playing area looks nice enough, with basic background gradients and a simple space, but the only visual pizzazz beyond that comes from the positioning of the pieces. On the audio side, there's no background music, just the sound of pieces you collect being tallied. It's relaxing, almost soothing, but it's not interesting. A part of me wishes this one had been released on 3DS, where I suspect the added dimension would have made things look very nice. It might also look nice through the Labo VR set, if such a feature were added. I'm not holding my breath, though. 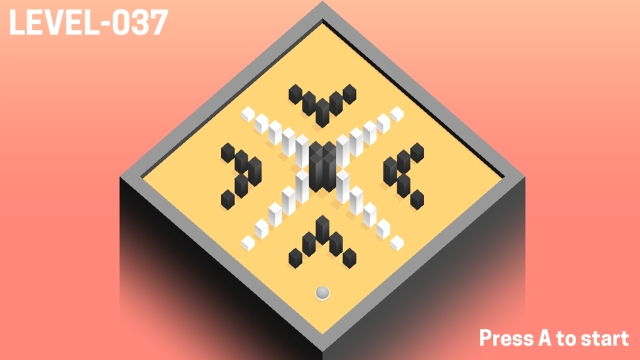 There are somewhere around 150 stages in the game. I can't tell you the precise number, because I cleared the final one and hadn't noted the number. The next thing I knew, I was back in level 1 and going through the lot of them again. There's no fanfare when you win, no indication that you've accomplished anything. Swallow Up is clearly intended merely as a very basic time killer. No more, no less.

In terms of difficulty, there are a few stages that require careful maneuvering. You can use either your finger or the analog sticks, and I chose the latter. The ball moves responsively, and while I found it just a little bit too easy to move it further than I wanted with a slight nudge of the analog stick, that was never a huge issue. Some levels present almost as a maze, where you have to move along narrow corridors without getting too near the edges lest you bring a wall toppling down on you from above (blocks of other colors still respond to your magnetic pull, just not as eagerly). 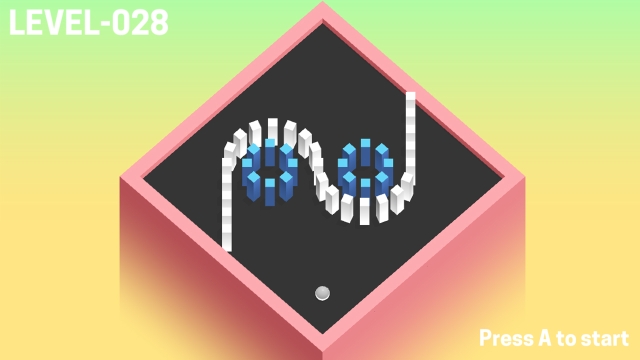 The stage designs are sometimes inventive, though usually the best strategy is to get just near enough to a series of blocks that it starts coming to you without any need for you to put yourself in danger. Obstacles rarely move unless you get reckless and cause something to tumble, so good reflexes aren't mandatory. However, there are a few cases where a column of white blocks will have a different block resting atop it, so then you need to be careful.

Clearing the game once will likely require a proficient player to devote perhaps an hour and a half to the effort. A failed attempt never feels like a particular waste of time, since the stages are so short, but neither does any one success feel meaningful. My final impression is that Swallow Up is well worth half the current asking price, but the value proposition as numbers climb higher from there becomes rather murky. I suggest adding this one to your wish list and keeping an eye on eShop sales, unless you're a hardcore fan of casual games.
3/5

If you enjoyed this Swallow Up review, you're encouraged to discuss it with the author and with other members of the site's community. If you don't already have an HonestGamers account, you can sign up for one in a snap. Thank you for reading!

© 1998-2020 HonestGamers
None of the material contained within this site may be reproduced in any conceivable fashion without permission from the author(s) of said material. This site is not sponsored or endorsed by Nintendo, Sega, Sony, Microsoft, or any other such party. Swallow Up is a registered trademark of its copyright holder. This site makes no claim to Swallow Up, its characters, screenshots, artwork, music, or any intellectual property contained within. Opinions expressed on this site do not necessarily represent the opinion of site staff or sponsors. Staff and freelance reviews are typically written based on time spent with a retail review copy or review key for the game that is provided by its publisher.