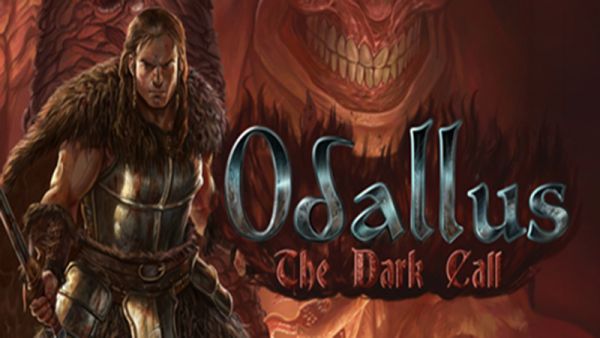 After playing through and loving the game Oniken, I decided to keep an eye on its developers, JoyMasher. I figured if they could produce one excellent piece of faux-retro mayhem, they could most likely replicate the result. So it was that I continually refreshed their website's main page every hour for days occasionally scouted for news of a follow-up game, until at last a new batch of screenshots caught my eye.

In those new screens, I glimpsed a sword-toting warrior dicing up undead beasts, Castlevania-style. I saw him exploring terrain that looked oh so Metroid, and taking on ferocious and gruesome bosses. As a huge fan of the former brand who has played more than his share of disappointing Castlevania clones over the years, I suddenly found myself reluctant to give the new game a shot, and yet at the same time I was psyched for its potential. Deep down, I had faith that JoyMasher would deliver. 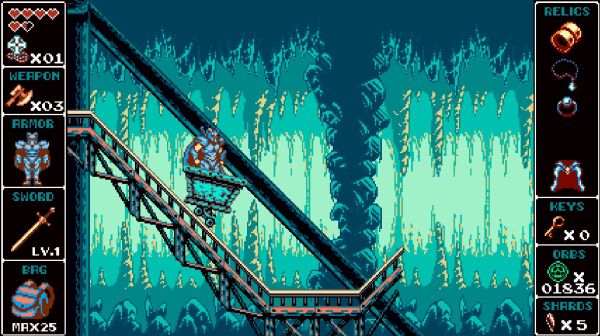 Much like Oniken before it, Odallus is careful about its old school game references. You won't find clumsy throwbacks like an old man claiming to be named "Error," or a tavern called "Good! Friends" (sic). Rather, the only blatant nostalgia on display is intertwined with either gameplay or general design. For instance, Odallus features sub-weapons similar to those found in the Castlevania series, such as spears, torches, and axes. Other hat-tips remain thinly veiled, however, such as bulky knights who resemble those found in various Castlevania games and even rely on a nearly identical sword technique.

Instead of wasting time with incessant name-dropping, JoyMasher focused on crafting an adventure that plays like an authentic NES-era release, and they absolutely nailed it. Sure, some of the visuals are cleaner than your standard early '90s platformer. But the simplistic sprites, toned down color palette, tight and simple control scheme, and nearly MIDI-quality score set the mood perfectly. 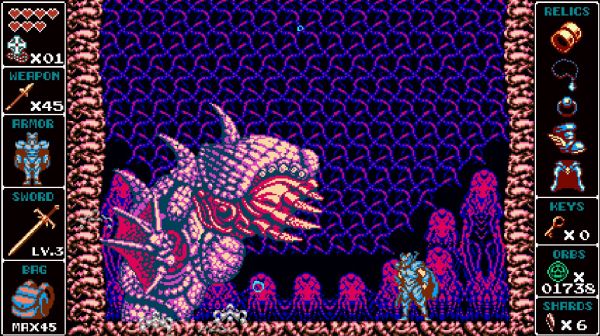 If you're concerned that I've been mentioning Konami's face-breaking darling too often, rest assured that this game isn't nearly as devastating in the challenge department. Odallus sports balanced difficulty thanks to how forgiving it is. Each stage contains multiple check points, and various changes that you affect within a level (e.g. unlocking a door, defeating a mid-boss, etc.) remain even after you've lost your last life. Continues are infinite, as well, and some regions have teleporters that allow you to skip over half of the level if you are forced to restart. There also are copious upgrades found throughout the campaign. Needless to say, Odallus's campaign isn't nearly as rage quit inducing as the old school experiences that influenced it.

Along with its relative breeziness, two additional features kept me glued to Odallus. One element, exploration, is connected to the aforementioned upgrades. The game's level structure doesn't abide by the age old "advance to the right" schematic, and instead is more akin to Metroid. Hither and yon wait various hidden troves and passageways that you can access at various points throughout the campaign. Some chambers merely require you to chop your way through a wall in order to reach them, but others are inaccessible without a particular artifact or sub-weapon. If you want to, say, bash away ice walls, then you'd best have some torches to lob. Do you need to leap across a wide chasm? Either a dash ring or double-jump boots should do the trick. The spoils for sating curiosity vary quite wildly. Most of the time you'll nab a handful of coins that you can exchange for restorative goods, sub-weapon refills, or extra lives. Sometimes, though, taking the time to navigate alternate routes leads to maximum health increases, a shinier set of armor, or a swifter blade.

You'll need all of the advantages you can muster, too. Odallus showcases a vicious bestiary, packed with undead goons and demonic entities. You'll cut up your share of pickaxe-tossing skeletons, mutant bears, ice mages, grotesque fish, enormous armored insects, and disembodied heads wrapped in tentacles. Such creatures are nothing compared to the main rogues gallery, though. One boss repeatedly ascends and descends a wall, occasionally sending out its centipede-like tongue to grasp you. Another massive human-faced quadruped exudes frost and occasionally exposes its weakness, a lovely maiden attached to a long strand of flesh. You'll also tangle with an aquatic horror with spear-like protuberances, cross blades with a dual-sword wielding demon-woman, and duel with a malefic skeletal mage comparable to Dracula's cohort Death--a grudge match that culminates in a heart-pounding clash near the game's conclusion. 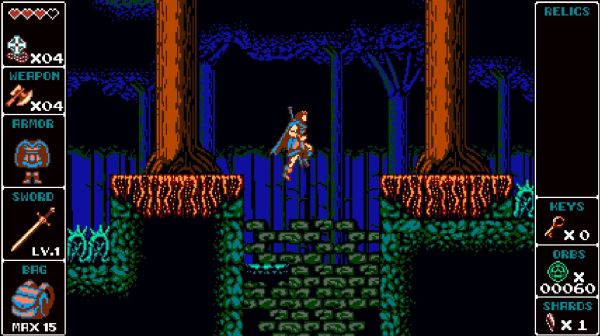 This is all in addition to JoyMasher-trademark crazy scenes, similar to those witnessed in Oniken. You'll traverse endless mines from within a precarious cart, leaping over or ducking beneath obstacles along the way. Not long before that is a segment in which you attempt to outrun a hungry caterpillar-like abomination whilst bounding over hurdles and carving holes in stone. You knees might also start knocking as you enter hellish terrains, some of which appear to be the innards of some massive beast or perhaps temples composed entirely of flesh. Successfully navigate a slow-motion drop through a spike-filled tunnel and your reward might be a ride along a dark river teeming with roadblocks and gilled horrors, a tour across a lava-filled crevice using appearing-disappearing platforms (a la Mega Man), or a frustrating ascent to a grand vista with moving bricks and damning wind as your foes.

In short, Odallus: The Dark Call is everything it needs to be. Sure, some boss encounters could stand to show a little better adherence to pattern-based design, but their horrifying and detailed--not to mention creative--appearances more than make up for what's basically a slight hiccup in a thoroughly terrific game. With memorable scenes, grisly sets pieces, exhilarating action, exploration galore, and a firm emphasis on mechanics and atmosphere over in-your-face homages, I can't recommend Odallus enough.
5/5

If you enjoyed this Odallus: The Dark Call review, you're encouraged to discuss it with the author and with other members of the site's community. If you don't already have an HonestGamers account, you can sign up for one in a snap. Thank you for reading!

© 1998-2020 HonestGamers
None of the material contained within this site may be reproduced in any conceivable fashion without permission from the author(s) of said material. This site is not sponsored or endorsed by Nintendo, Sega, Sony, Microsoft, or any other such party. Odallus: The Dark Call is a registered trademark of its copyright holder. This site makes no claim to Odallus: The Dark Call, its characters, screenshots, artwork, music, or any intellectual property contained within. Opinions expressed on this site do not necessarily represent the opinion of site staff or sponsors. Staff and freelance reviews are typically written based on time spent with a retail review copy or review key for the game that is provided by its publisher.