Youve been let down by a sequel or follow up, right? Please tell me thats something thats never happened to you. Quarantine Circular is neither of these, but it does occur in the same universe as Subsurface Circular, which managed to hook a lot attention for its wit and narrative innovation. This one, however, doesnt quite fill the prescription.

Mike Bithell has the uncanny ability to present stories as interactive explorations of narrative and personality that can leave you with a lot to ponder in addition to being enjoyable. Quarantine Circular fits that bill but lacks the fascination of the prior short, but I really dont want to undersell it. Maybe it was easy because of my outlook on life, but dang it, I just know thats not true.

Before I get into where I feel the failings lie, why dont I brief you on the mechanics and content of the game? Well, not so much the content - this will be a spoiler free review, after all. This is, for all intents and purposes, a visual novel with slightly stylized polygonal assets. Conversation and the interaction between characters is the centerpiece, and thus the main interface element is a wall of instant messaging text bubbles that dominate the center of the screen. 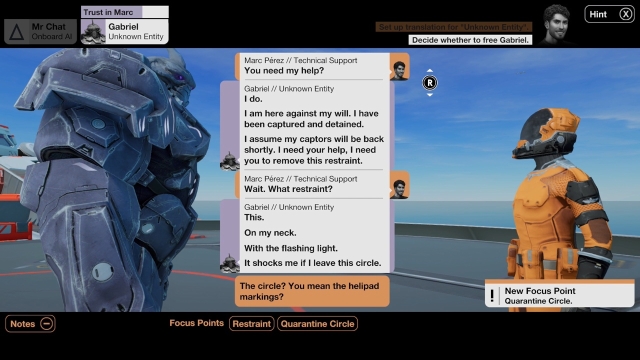 These text bubbles have profile images attached to them so you know whos speaking, and every so often youll be presented with a group of responses to choose from that will steer the plot forward. On occasion youll enter a loop where youll need to discern an answer from clues given in conversation or in Notes, which are the personal log files of the characters you meet and interact with. Theres no failure state in these puzzle loops, and they will not affect the outcome of the game - that responsibility falls to sometimes ambiguous questions and statements you will choose along the way.

Just as with Subsurface Circular, the text options present different attitudes in unmistakable language and tone, but they dont seem to be hinged on previous experience. This could well be Bithell commenting on how changeable people are, though he is putting the responsibility on you to decide the outcome instead of NPCs, this time. So its all on you, dear player. Feeling the guilt yet? 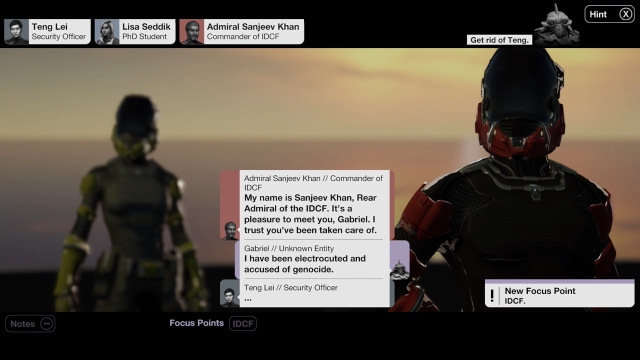 Given the outcome of my first time playthrough, there was no guilt to be had. Navigating the supposed complexity of human ethos left me feeling pretty flat about the whole game. I know sometimes intellectuals can be too reasonable - I mean, here I am rationalizing - but there was just one wildcard in the situation, and what I would deem very little in the way of dramatics from anyone else.

I cant say that everyone with a university degree is that level headed, and it comes down to the point that I was just looking for deception and foibles where none could be found. The lack of opposition defeated my sense of peril in circumstances painted most dire. It is ironic to me that one of this games weaknesses is its writing, but the evenness of attitude makes an conceptual essay such as this come off as milquetoast when it addresses concerns so relevant to the world. 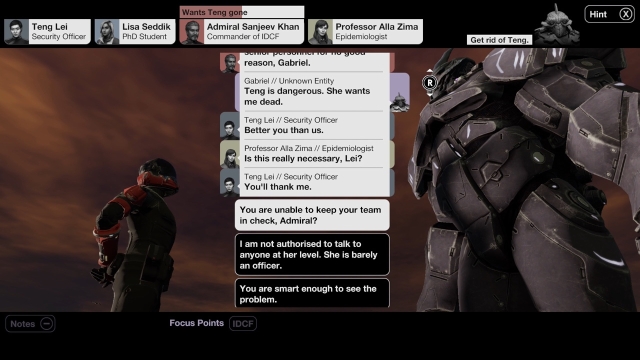 What I wont spoil - and what youll get to discover - is almost unsurprising, unfortunately, but not a waste of time. The story just landed on the surface instead of properly diving into the reality as presented. His treatment of these ideas was under served and left me wanting more, very much unlike the prior Circular short. Just two hours could have been enough if it hadnt been for those perspective shifts and technical failings.

Ant Workshops port of the PC version looks to be rushed in some respects, as well. Was it really necessary to lower the resolution of a single boat reflection to keep a playable framerate for a title that doesnt depend it for gameplay? Whats with the clipping of that piece of gauntlet? At least these things can be addressed with an updated version, but this is polish that is surprisingly lacking and smacks of a less inspired game overall. The panache I saw in Subsurface Circular is absent here, with characters dull and ordinary compared to their Tek counterparts.

Meanwhile, Dan Le Sacs soundtrack was a step above his previous work in Subsurface Circular, doing its best to mount tension when it was required and provide pleasant background themes to underscore tense but measured conversation. Layered synths were his weapon of choice, and were never intrusive. I wouldnt have wanted dramatic melodies or personal themes here, as the dialogue was doing most of the heavy lifting. That worked for me, though a soundtrack with more personality might have compensated for the lack of ethos. 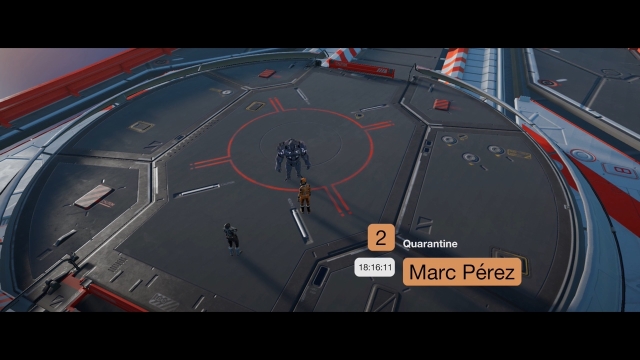 I have a strong feeling that Bithell held back somewhere, being so reasonable, and as something of an intellectual I can relate. The games digital artwork shows an alien hauling a person in a suit up to his/her/their face in an unmistakable attempt to be heard, but in game I never once felt the threat or tension can only gather was intended. The net result of all the equitable conversation is that the conflict fails to reach its potential height and audience. Those of us who were interested in this discussion have already had it and dont appear willing to dote on it any longer.

This isnt what Id call Bithells strongest showing, but I do long to find out what he plans to explore next. Whether you choose to invest in your sense of curiosity, you can be sure that its not an expensive prospect. It just bothers me that such a serious premise should be handled with this notable sense of listlessness. What purports to be heavy intellectual exercise floats along as lightweight and easily sorted fluff, and thats a shame.

If you enjoyed this Quarantine Circular review, you're encouraged to discuss it with the author and with other members of the site's community. If you don't already have an HonestGamers account, you can sign up for one in a snap. Thank you for reading!

© 1998-2021 HonestGamers
None of the material contained within this site may be reproduced in any conceivable fashion without permission from the author(s) of said material. This site is not sponsored or endorsed by Nintendo, Sega, Sony, Microsoft, or any other such party. Quarantine Circular is a registered trademark of its copyright holder. This site makes no claim to Quarantine Circular, its characters, screenshots, artwork, music, or any intellectual property contained within. Opinions expressed on this site do not necessarily represent the opinion of site staff or sponsors. Staff and freelance reviews are typically written based on time spent with a retail review copy or review key for the game that is provided by its publisher.