3D Out Run is finally available on the 3DS in North America, something like a year after its arrival in Japan, so I decided the game would be a great introduction to the series of classic Sega titles that M2 has quietly been bringing to the 3DS hardware. The timing was ideal, as I now own a New Nintendo 3DS and can finally play with the 3D in effect without feeling like my eyes have been dunked in a vat of acid. Fortunately, the Sega PR person I contacted was gracious enough to supply a code, even though I asked for a review key for "Outrun 3D." I'm not proud of that.

To tell you about 3D Out Run, I suppose I should summarize my less than conventional history with the original game. My dad didn't make a lot of electronics purchases when I was young, but when he did, they were often various degrees of disappointing. I had wanted a computer at home for months, and when he finally purchased one, it was a Tandy from Radio Shack. The investment wasn't for my benefit, as the machine wasn't intended for family use. The idea was that my dad would use it to keep records of his business, mostly on weekends when he came home from working as a long-haul truck driver.

Our mobile home didn't have a lot of room for a workstation, so the computer was relegated to the camp trailer we had parked on the edge of our property, near two enormous logs that would eventually be chopped up to produce most of a shed full of firewood. The camp trailer was hooked up to electricity and served as my father's home office, which I mostly avoided. I would sometimes go out to the "office" and play on the computer, but that didn't happen a lot because the Tandy in general was about as exciting as a dirty sock. However, working in its favor was a copy of Out Run that someone had installed at the store. Thus, I couldn't talk myself into ignoring the RV altogether. 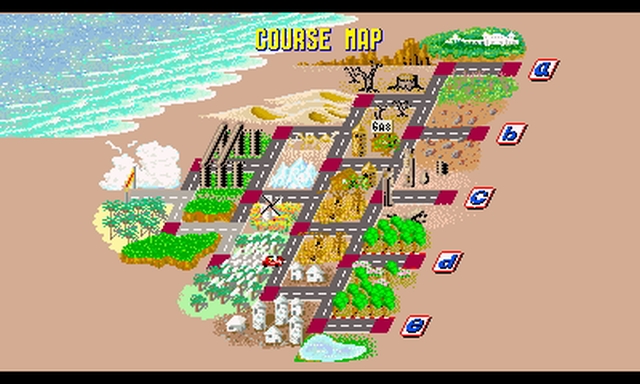 Out Run was based on the arcade game of the same name, and it ran beautifully on the otherwise uninteresting Tandy. I've since heard that some home ports of the game had issues replicating the arcade feel and scaling effect, but the version I played came about as close as I guess you can without purchasing a hard plastic chair, steering wheel and brake pedals. I spent quite a few hours with the game over the years, because it was simple enough to understand but difficult to master, and also because I didn't have access to a whole lot of games.

The idea in any version of Out Run is that you want to drive really fast and get to the end of a branching course. There are five possible finish lines, and it doesn't matter which one you reach as long as you get to one of them. You do this by passing through checkpoints along the way that extend your timer, and by avoiding a bunch of traffic as you pull through tight turns, brake, and shift between high and low gears. If you do happen to crash, well, that's a big deal; you can afford only a handful of accidents, even if otherwise your driving is impeccable. Besides that, your blonde passenger will point accusingly at you each time you roll the car. I don't know what she was complaining about, really. The crashes are never fatal. 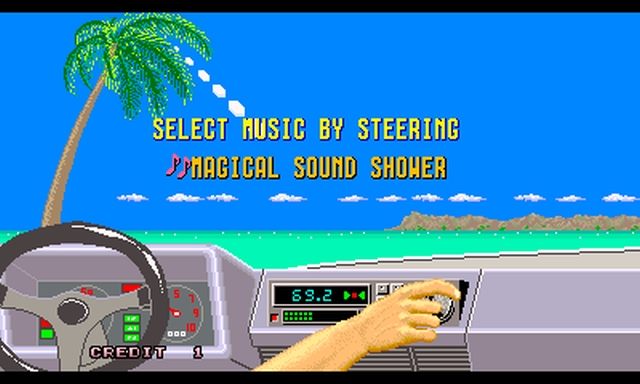 One reason I found Out Run irresistible is that at the time, it was gorgeous. I was in fifth grade or so when it first arrived, and we had an NES by that point, but the game looked better than anything the old 8-bit hardware could manage. Beautiful courses spread out ahead of me, no matter which route I took, and I looked forward to each change of scenery as I blew through checkpoints. It was always exciting to see how far I could get before I inevitably failed to reach the end. I felt like I was in my own little world on the occasions when I played Out Run in the old camp trailer.

3D Out Run replicates much of that feeling, and I love it for that. When I started playing, I wasn't sure how nostalgic the trip would be, or how accessible. Happily, M2 did a great job.

The first reason I like the game so much is that it looks and sounds great, just like I hoped it would. You start by choosing which song you want to play, as usual. This time, there are five songs instead of the familiar three. You still turn a dial to make your selection. It just happens that you can turn it further to the left or right if you want to hear the new tunes. I sampled them and they're not bad, but I still prefer the classics. Imagine playing Tetris on the Game Boy with a few new songs. They would never feel quite right. After choosing your soundtrack, you get to start racing. Although the car model doesn't look as sleek as I remembered, I suspect that's because I've spent too many years playing newer racing titles. The classic vehicle still does its job, and the blonde passenger seems to have survived the port with her judgmental pointer finger intact. 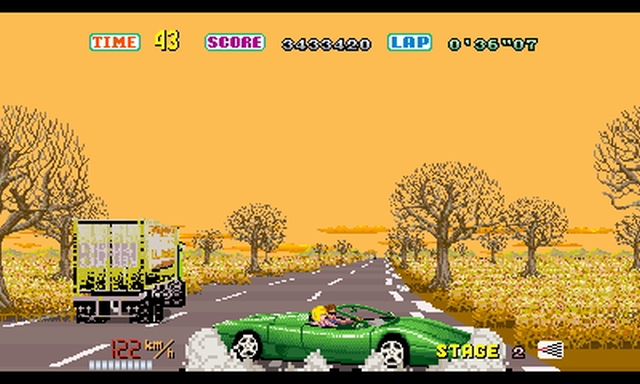 Courses are still fun to drive through, I can report, and other drivers are still irritating. Now, though, you can enable the 3D effect and that makes a genuine difference. I found it much easier to weave through traffic--or to avoid dorks who like to change lane just as I'm trying to pass--with the 3D cranked up to the max. It's a subtle difference, but an appreciated one. Also, some of the architecture feels slightly more substantial than I recall, and the animations are all super smooth. Spinning out has never looked so good.

I mentioned accessibility, and it's here that 3D Out Run really delivers. You can switch between a Special mode and--once you unlock it--a faithful Arcade mode. In either case, you can also toggle the difficulty between five stars, which lets you basically eliminate traffic on the lowest level or add a bunch of it if you're a masochist. You can also extend the timer, which is of course tremendously helpful especially if you suck.

Clearing courses makes things even easier, since you unlock vehicle enhancements that let your car handle better off-road, or add to its top speed or turning capabilities or prevent it from spinning all over the place as readily when it collides with other vehicles. You can easily tap to enable or disable these, and the leaderboards that display at the end of a drive change depending on which cheats you currently have in effect.

I suspect that my dad still has that old Tandy computer in storage somewhere, because my tendency to be a pack rat has to come from somewhere. I could probably drive over the mountain for a visit, hook up the computer, and relive my glory days in Out Run. Such a trip feels like more effort than is worthwhile, though, especially since now I can simply turn on my 3DS and experience a better version of the game in the form of 3D Out Run. If you have a history of your own with the original game or one of its ports, take my advice and give this new edition a shot. I'm betting you'll be glad you did.
4.5/5

If you enjoyed this 3D Out Run review, you're encouraged to discuss it with the author and with other members of the site's community. If you don't already have an HonestGamers account, you can sign up for one in a snap. Thank you for reading!

© 1998-2020 HonestGamers
None of the material contained within this site may be reproduced in any conceivable fashion without permission from the author(s) of said material. This site is not sponsored or endorsed by Nintendo, Sega, Sony, Microsoft, or any other such party. 3D Out Run is a registered trademark of its copyright holder. This site makes no claim to 3D Out Run, its characters, screenshots, artwork, music, or any intellectual property contained within. Opinions expressed on this site do not necessarily represent the opinion of site staff or sponsors. Staff and freelance reviews are typically written based on time spent with a retail review copy or review key for the game that is provided by its publisher.