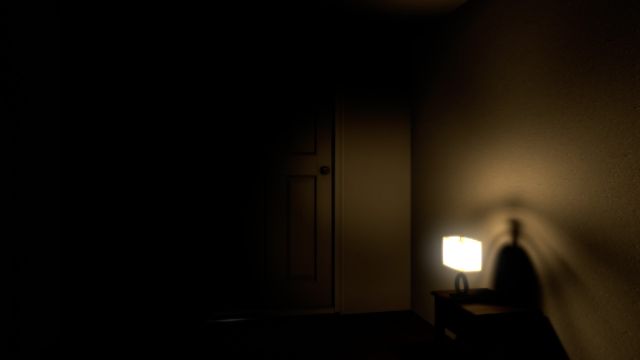 The instant you read the title Apartment 666, you know what you're getting into: a run of the mill supernatural horror offering that unfolds and finishes in every predictable way. You know the instant you get out of bed in-game and amble towards your door that you're going to creep down a hallway and hear disembodied voices, random laughter, and the occasional guttural growl. You're not even surprised when one of the corridor lamps breaks at just the right time in a weak attempt at a jump scare, nor are you even slightly shocked that the game's preferred means of narrative is random notes found lying around the titular living space.

Apartment bears all of the markings of a mediocre horror title, and it yet doesn't even reach that level of quality. You realize this as you drunkenly waddle through a door at the end of the previously discussed corridor, only to end up rising from bed once more. Not long after that, you encounter a newspaper clipping with a headline that very blatantly tells you what's going on. You sigh and press onward, exiting the bedroom door once again. Your next objective? Mosey through the same door at the end of the hallway.

And get out of bed yet again...

You go through this rigmarole numerous times, except each go-round sees you completing various mundane tasks in order to unlock the "egress." No, seriously: a few times you merely open doors to other rooms and stand in them to coax the exit open. THE HORROR. Requirements grow even more unclear as the campaign advances, as you'll notice a handful of times where you wander around the hallway doing nothing in particular, only to find out your screwing around somehow did the trick. 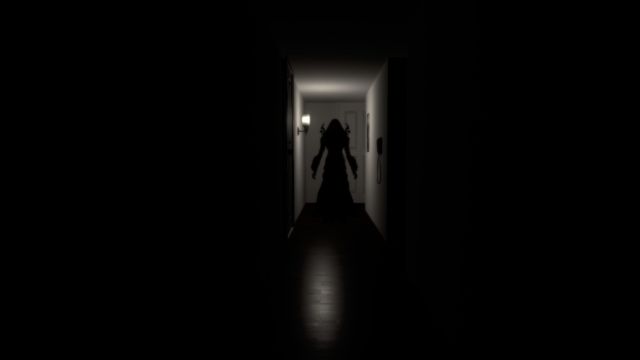 By far the worst case of vague objectives involves getting stuck in a storage room. The entryway locks upon entering, and nothing in the vicinity even hints at what you need to do next. The solution? Stand next to the couch for a few seconds. I'm not kidding you: this is a solution to a "puzzle" in this title, for which you receive no hints and can only solve by hitting up Steam's forum or Google.

Additional cliches emerge as you advance. Lights flicker, ominous messages appear on walls, and heaps of newspaper clippings (that all look exactly the same, except with a different headline) clumsily unravel the plot about as effectively as Homer Simpson telling a ghost story. At these points, the plot feeds one plain line of text at a time. "The kid's brother and sister have also been murdered." "His father and uncle are suspects." The narrative moves along like someone doing a crap job of describing the movie they saw on Shudder a few nights ago.

Apartment eventually dips into some nearly frightening material when demonic presences make themselves known, usually before the lights burn out. You get a few decently creepy moments where you see some ungodly thing appear, right before being left in the dark. However, you know almost right away that nothing will happen, and you'll just wind up back in bed again. 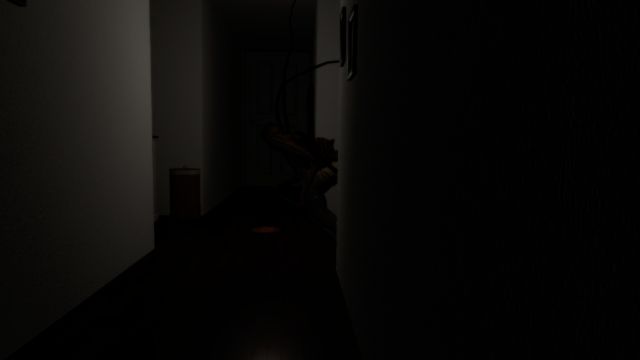 Worse than that, what few nearly terrifying scenes the game boasts remain difficult to take seriously because of the cheesiness of the frights leading up to this point. Hearing helium-voiced demons sing "Hush Little Baby" or random children crying or telephones ringing call to mind such cheap, unimaginative horror fare that Apartment's few legit scares just don't land. Had there been stronger groundwork laid out before them in the form of a more finely developed, resonant story or carefully crafted freak-outs, then these would-be jolts might've actually worked.

After roughly an hour, you reach the finish line, and hoo boy... Way back when I was looking into publishing one of my own stories, I saw numerous editors say that they wouldn't even consider tales that ended with either the protagonist waking up from a dream or a "twist" that revealed the main character was actually insane. I won't entirely spoil the ending here, but it involves one of these two. You're not even surprised by it when it happens, either. The truth comes out and you're like, "Of course."

Apartment 666 adds nothing new to the genre or the haunted doimicile sub-category. It treads all of the same ground in perhaps the most anticlimactic way imaginable, hitting you with the most tired material it can muster. At last, it wraps up all of its worn out content with even more worn out content, and yet none of this is a shock because look at the damn title. It sports such an on-the-nose moniker that you should be able to discern immediately that this is your everyday horror adventure, rife with predictable plot beats and flaccid frights.

If you enjoyed this Apartment 666 review, you're encouraged to discuss it with the author and with other members of the site's community. If you don't already have an HonestGamers account, you can sign up for one in a snap. Thank you for reading!

© 1998-2021 HonestGamers
None of the material contained within this site may be reproduced in any conceivable fashion without permission from the author(s) of said material. This site is not sponsored or endorsed by Nintendo, Sega, Sony, Microsoft, or any other such party. Apartment 666 is a registered trademark of its copyright holder. This site makes no claim to Apartment 666, its characters, screenshots, artwork, music, or any intellectual property contained within. Opinions expressed on this site do not necessarily represent the opinion of site staff or sponsors. Staff and freelance reviews are typically written based on time spent with a retail review copy or review key for the game that is provided by its publisher.