Considering the circumstances surrounding the original version's release, it's actually quite astonishing that The 25th Ward not only secured an upgraded release to consoles and PCs 13-some years later, but was also published outside Japan. This sequel to The Silver Case, which itself is a relatively unknown and niche PlayStation 1 title, was initially published on Japanese mobile devices back in 2005. Not only that, but the game was distributed on a specific service in episodic format. It gets better: due to contractual issues, the game switched to another service a few months later... without the final chapters included. That's rough. Since then, the game has quietly faded into obscurity's obscurity, not seeing any new form of release until 2018 on more accessible platforms.

Following in the footsteps of its predecessor, The 25th Ward adheres to a story-based adventure design where images, drawings, and text scrolls galore are the dominant narration structure. However, this sequel has modified some gameplay aspects down to their core, with forced 3D exploration segments being the prime alterations. In the previous title, these parts made players manually and pointlessly wander back and forth for clear-cut clues in a futile attempt to add "gameplay," which is now mostly reduced to on-rails navigation in this one. Mostly. 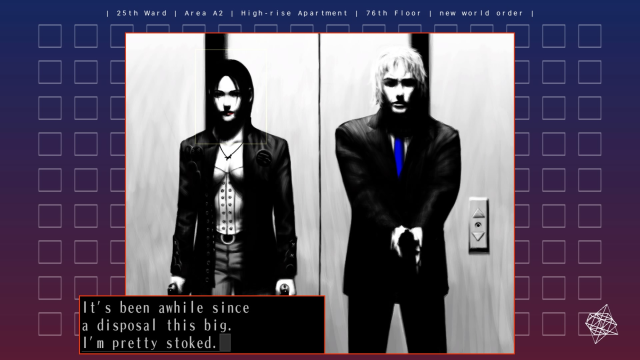 If this were any other game, I'd be beyond irritated by this scaling down; but since The Silver Case became such a tedious experience due to these contrived elements, such as knocking on every door at an apartment complex, this stripping-down is very much welcomed. Though, there's now a larger emphasis on "puzzle-solving," which is mainly based on word and number code memorization, that or process-of-elimination scenarios. While the simplification of the exploration system pushes The 25th Ward closer to a visual novel-style product, it's for the best, since there's now a bigger focus on telling a huge plot.

The story takes place approximately six years after The Silver Case, which involved an unusual set of criminal activities that ravaged the 24th Ward, an area of Japan meant to be a utopia. Since then, a 25th Ward has been constructed that supposedly rectified the mistakes of its predecessor. And just like its forerunner, the ward also functions as an independent state separate from the Japanese government. People chose to live here to escape typical government rule and everyday society, but do so under strict living conditions. From here, the game gives you three story branches to chose and switch between: the 25th Ward Heinous Crimes Unit's investigations into mysterious deaths of everyday citizens, the Regional Adjustment Bureau's... "adjustment" of everyday citizens and the politics behind this method, and the return of a freelance reporter and his pet turtle.

While the three different plot paths were scripted by three different writers, the game itself was directed by Suda51, and it shows. The usual suspects make their appearance: abstract direction, crude language, explicit violence, an obsession with assassins, an obsession with showing shots of the moon, and oddball moments that disrupt "normal" flow. In one section, for example, you enter a simple convenience store which doubles as an item appraisal location in the back room toilet; a toilet that's at the tail end of a winding maze dungeon. The clerk gives you directions, but the text wall purposely auto-scrolls really fast in its small box, that you have to repeat it several times just to get everything. In another situation, The 25th Ward outright thrusts you into turned-based combat for an entire chapter. That's... actually one of the more subtle things about that chapter. 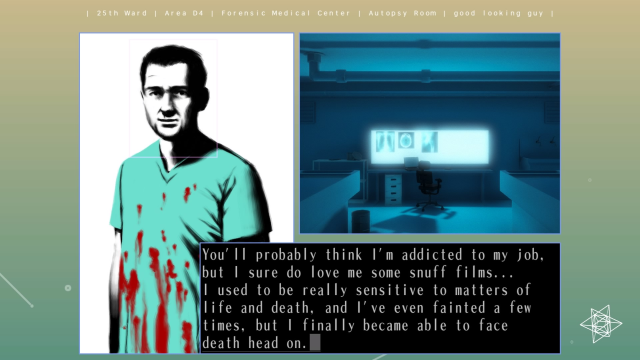 These segments sound intriguing, but they're just variations of the memorization and process-of-elimination puzzles you already go through. Not only that, but they also continue the problem plaguing "bigger" versions of these puzzles by being more than simple password or selection entries. The turned-based combat puzzles, for instance, expect you to enter the right actions every time. Make one mistake, and you have to redo the entire sequence... but first you have to finish the sequence you screwed up on. Guess what happens if you restart the sequence and make another mistake? Yeah. This version pops up several times, most notably in the reporter's path. Though, the absolute worst thing about these puzzles is not having an inkling of what the right answers could be, so you're brute forcing the solutions.

They're a nuisance and obvious time wasters, and I'm thankful these aren't the dominant puzzle types in The 25th Ward, so they don't intrude on or ruin the plot; the story already does a good job wrecking itself. Saying that the story structure of The 25th Ward is a mess would be an astounding understatement. Experiencing the plot firsthand is the equivalent to looking at a sculpture in an art museum, admiring the time, effort, and finesse put into the piece, only to then witness a flaming dumpster roll in from outside, crashing into the object. If I could submit that sole, previous sentence as my review, I would.

The game has a very ambitious storyline where several threads from the three branches both cross over or connect to one another. However, the issue has less to do with The 25th Ward being a huge tale, and more with the failure to weave it in a consistently comprehensible, entertaining manner. The game starts off fine enough, as you're introduced into this new ward, each branch's respective characters, and their roles. Some characters have mysterious motives or pasts. This is fine, too. But then you're quickly overwhelmed with character introductions, even for characters that are on screen very briefly and ones mentioned in passing. You would think such characters won't hold any important weight to the story, right? Especially since they don't appear or mentioned for several chapters, yeah? 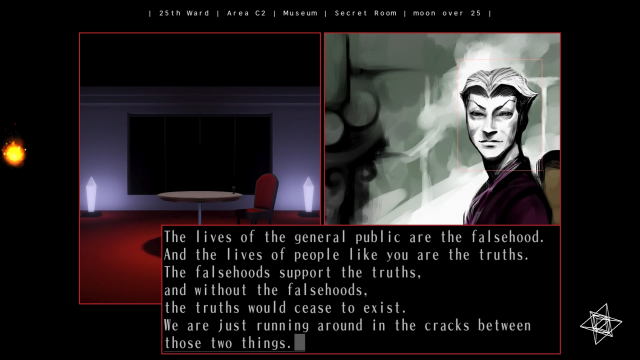 By the time you reach the middle-to-late chapters for each branch, The 25th Ward has introduced well over 20 people, and characters that haven't appeared in some time or had any significant importance to the plot... are now being casually mentioned as having significant importance to the plot. You're seriously expected to remember these characters when they're brought up again, several, several hours later, when numerous plot points have passed, countless red herrings have come, gone, and returned, and mountains of text have been read. All this while the game is still introducing new characters! And since these people are brought late in the game, they barely have any screen time, making their appearances all the more needless.

I mean, at the end of the second chapter of one branch, a supposedly pivotal person is introduced, and he outright vanishes from the plot afterwards. He "appears" four chapters later, when mentioned in passing by a person you're talking to, who happens to be speaking to you through a door, and the game still treats him crucial to the plot. I legitimately need you to visualize this moment: one of the most vital plot points in the game is being told to you through a door, about a person you only seen once numerous chapters ago, by another person you just met, whose face you're never going to see. You're literally staring at a door as text scrolls by. It's insanity. Remember, too, that the original version of The 25th Ward was released episodically. What a payoff.

Another main problem is how The 25th Ward tries way too hard to be deep and philosophical with its characters, which isn't meshed well with Suda51's quirky moments. There are genuine moments of character building and interaction, such as in the case of Kuroyanagi, a foul-mouthed detective who is, as another character calls her, a "Japanese Dirty Harry." She loves guns, constantly scolds her coworkers with animated language, but a bit later into the story, her teammate finds out she moonlights at a manga cafe for... something. But that silly, goofy stuff then awkwardly segues into conversation pieces that make it seem like I'm reading text from a student's sociology thesis. "Who are we really?" "This manipulation of society??" "The ideas behind this idea might be a ruse for other ideas!" "Id! Ego! Super Ego!" Now imagine someone dragging these thoughts out into a 15-to-20 hour game.

There's too much of it, which only gets worse during the latter half when the game is suddenly trying to be a David Lynch-David Cronenberg hybrid; the heavy use of this dialogue often makes the characters seem like stiff representations of humans. 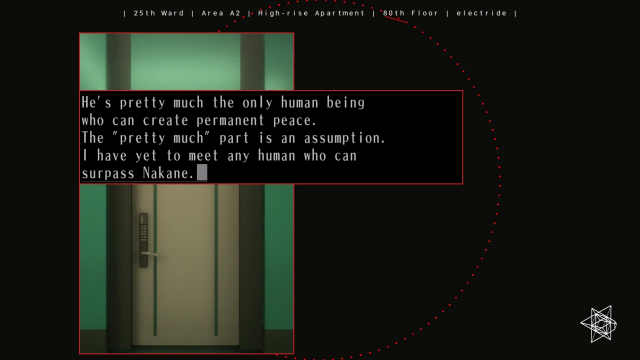 The Silver Case, for all its flaws concerning story flow, actually succeeded in making most of its characters and situations feel real. That game does a better job providing conflict and conversations without feeling like someone wrote an essay about the inner workings of the human mind. One particular person in that game, Kusabi, also happens to be a grumpy, foul-mouthed detective who constantly gives death threats to his coworkers. He's the best. However, I don't love him just for his crass attitude, I love him because he's written as one of the realest characters I've witnessed in a video game. His humanity is one reason why I forced myself to play the game to completion. It's only till the very end where its soul starts decomposing. The 25th Ward's decomposition starts much, much earlier... There a few standout characters, but overall, the writing and presentation of most of its cast doesn't even come close to what The Silver Case did in that regard, which is a surprising contrast.

The greatest shame is how The 25th Ward could have been something special, could have easily eclipsed its predecessor in so many ways. There's clearly a vision here, which is helped by the monochromatic visuals that give the universe its neo-noir flair, the rich, captivating soundtrack, and the imposing nature of its plot. The remake went the extra distance of restructuring itself from its mobile beginnings to accommodate the upgrade to bigger platforms, and the devs also added extra chapters! But even in core form, the game collapses in on its own ambiguous nature the deeper one gets into the story. Before you know it, issues that plagued The Silver Case seep in, such as being forced to navigate entire apartment complexes and having to do unnecessary searches, both which are obvious ploys to prolong the ending...

The 25th Ward might first appear as a bigger and badder version of its predecessor, but by the time you reach the climax of this dystopian fairytale, you realize it shares just as many annoying problems as The Silver Case. Probably more. 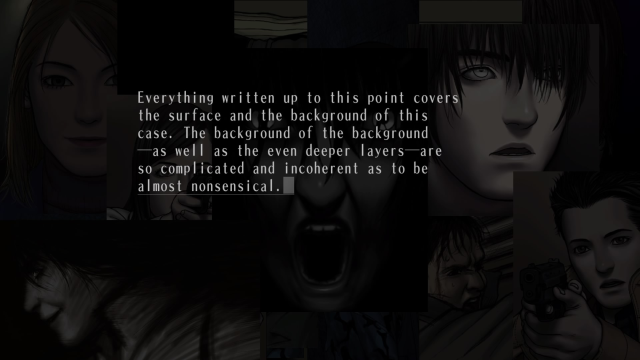 If you enjoyed this The 25th Ward: The Silver Case review, you're encouraged to discuss it with the author and with other members of the site's community. If you don't already have an HonestGamers account, you can sign up for one in a snap. Thank you for reading!

© 1998-2021 HonestGamers
None of the material contained within this site may be reproduced in any conceivable fashion without permission from the author(s) of said material. This site is not sponsored or endorsed by Nintendo, Sega, Sony, Microsoft, or any other such party. The 25th Ward: The Silver Case is a registered trademark of its copyright holder. This site makes no claim to The 25th Ward: The Silver Case, its characters, screenshots, artwork, music, or any intellectual property contained within. Opinions expressed on this site do not necessarily represent the opinion of site staff or sponsors. Staff and freelance reviews are typically written based on time spent with a retail review copy or review key for the game that is provided by its publisher.