This is a fantasy based on reality

In 2006 a trailer for a game called Final Fantasy versus XIII showed a young man dressed in modern clothes fighting against some soldiers outside a building, doing all the gravity defying jumps that Square-Enix cant get enough of. Its ten years later, and that game has finally been released, wisely distancing itself from the Final Fantasy XIII games to become the fifteenth entry in this never-ending series. This is a Final Fantasy game where the fantasy clashes with the mundane to create something different.

The story is straightforward  a prince is trying to reclaim his stolen kingdom from an evil empire that is doing evil things. Most of this takes place in the background. Theres a movie called Kingsglaive that spends a couple of hours setting everything in motion. Prince Noctis leaves the capital city with his three friends and protectors, and goes on a road trip filled with camping and cooking and fishing and side quests and occasionally coming into contact with the main plot.

Some criticism has been levelled at Final Fantasy XV regarding its lack of story (or the simplicity of said story), and I feel these people may be missing the point. The point is that its the story of four friends, who go on a long journey together. They face hardships and suffer losses, both as a group and individually. They grow as people, and they become more interesting and more familiar as the hours on the game clock click over. Noctis, Prompto, Gladiolus and Ignis are quite possibly the four most realised, fleshed out characters this series has produced. There are a few supporting characters who have limited screen time and development, but this isnt about them. Final Fantasy usually takes a more epic view of a world and its issues, and often with a much larger party. XV keeps its focus on the four lead characters and their journey. 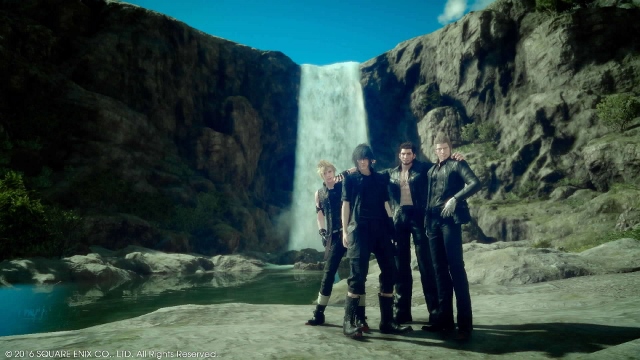 All four of these young men have the potential to be annoying, but they arent. Noctis carries the weight of the world on his shoulders, but still manages to be cheerful and funny. The cracks start to show when things get too real for him, but he pushes through and becomes a better character for it. Gladiolus is the muscle of the group. He can lose his temper, and isnt afraid to tell Noct to get his shit together when he needs to. Ignis is all class and style, a man who sees the world clearly. He will drive the car (if you dont feel like driving it manually as Noct) and he does all the cooking at camp (Ignis will announce that he has come up with a new recipe pretty much any time you collect meat off a monster youve killed for the first time or picked up some new vegetable. I swear, this starts off funny, gradually becomes annoying and then somehow finds its way back to being funny.) Prompto is a childhood friend of Noct, tends to be a joker and complains a bit, and has a hard time hiding his insecurities. He chronicles the journey with photographs of anything that strikes his fancy  you can look through them at the end of each day and save the good ones.

Its easy to see where Square-Enix has been influenced by Bethesda, where the main story is a minor part of a much larger world. Youll spend a lot of your time driving around a beautiful world, through deserts, wetlands, forests, mountains, beaches, and stopping at truck stops to get gas for your car (Having to fuel your vehicle is such a mundane concept, beautifully undermined by the fact that filling up the tank costs only 10 gil  for comparison, most food costs in the hundreds. The price of petroleum is the most fantastical element of the entire world of Eos).

You can drive, or you can let the AI takeover and just chill out listening to classic Final Fantasy soundtracks or the banter of Notcis and his friends. I love the way they will talk about current or recent quests or just share bad puns with each other. You can stop the car at any time along the way to check out anything that looks interesting. Step off the road and the land is ripe with monsters to kill and items to collect. 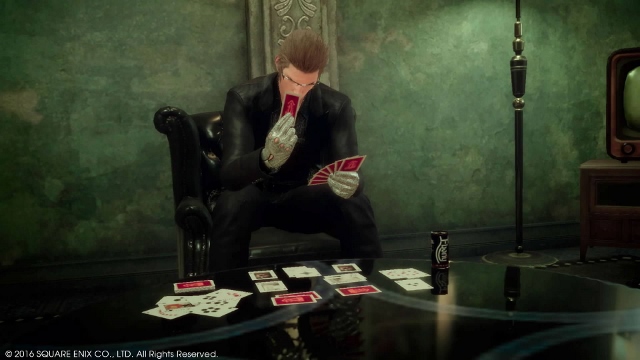 Final Fantasy has been flirting with the idea of an action RPG for a while. XV has ditched the turn based battling completely in favour of this fast and furious style. You take control of Noctis, who has a special power passed down through his royal bloodline  he can switch between weapons quickly, and throw them at enemies to warp strike them. As battles take place over a large field, being able to warp back into the fray or quickly jump to the next enemy is a stroke of genius to keep the battles moving at lightning speed. Noctis can also block and parry attacks if you can time it properly. The other three party members will fight their own way, usually very intelligently (often with more finesse than I can manage), but you can command them to use their special skills when a meter fills up.

Final Fantasy XV uses enemy encounters differently to many other RPGs. Early in the game you will enter a dark cave. As your party wanders through, tension is built through noises and moving shadows, but there isnt a single enemy encounter until youre about half way through. You keep expecting that jump scare, but it doesnt happen until you finally let your guard down. Ive rarely felt this sort of tension in a role-playing game, this is something RPGs should be doing more of since random encounters are now a relic of the past.

Staying in tents and inns has always been a staple of Final Fantasy, although you would only do it if you needed to restore your health. In XV, there is a day/night system. During the day, your party gathers experience from killing monsters and completing quests, but you dont level up unless you sleep. Its in your best interest to find somewhere to sleep when it gets dark, as the monsters at night are tough, especially in early in the game. Each outpost will have an inn or a caravan, or if youre out in the countryside, there are safe havens where you can pitch your tent. Its a welcome pull back to reality. 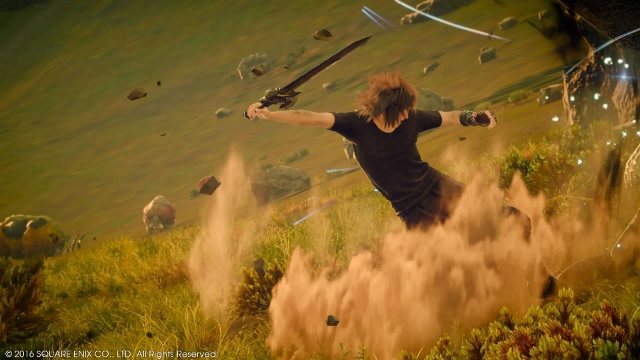 Ability points are used on the Ascension grid, which is much like the Sphere Grid from Final Fantasy X, or the Crystarium from XIII. When you have enough points, you can unlock new abilities or enhancements. Theres just one grid for all four party members  youll be able to see if the upgrade is for one party member, or all of them. Theres a little less depth to this than some of the previous systems this series has employed, but it helps to keep your party balanced and functioning as a single unit.

Final Fantasy XV is not perfect. Ive loved it despite being aware of its faults. Its certainly better than anything the company did in the last console generation  Square-Enix has remembered how important freedom and interactivity are to video games. There isnt as much depth as some of the older titles, though. Theres maybe a little more than a dozen named characters outside your party, and youll probably forget half their names the moment they arent on screen. Enemy generals seem to be built up, but they end up being interchangeable and forgettable, but youll certainly remember the characters that give you a steady supply of side quests. 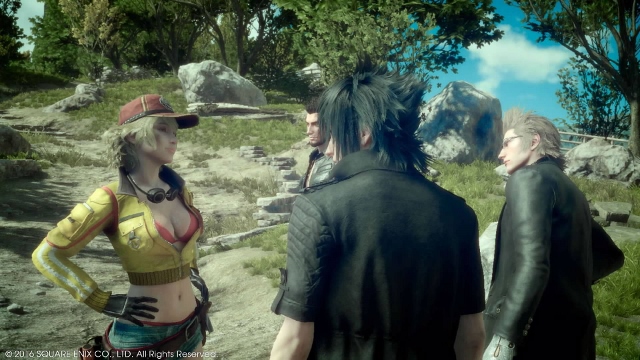 The main narrative is broken up into fifteen chapters. While most of the first half of the game takes place in the open world, eventually the story takes you away from that into something more linear. The stakes are raised and the party face their toughest struggles. You may have heard about Chapter 13 being a few hours of linear hallways (I doubt this is a coincidence). Noctis is stripped of his weapons and his companions, and the whole sequence is tense and uncomfortable, with the main villain Arydn taunting Noctis over loudspeaker. This sequence brought Noctics and myself to our lowest moments. The road trip is over and the party has split, and youre wondering if it can ever get back to how it was. I can understand players being put off by this, but I found it off-putting in just the right way. The sense of relief I felt at finally getting through this chapter was amazing.

Final Fantasy XV feels like a step in the right direction for Square-Enix. It doesnt manage to recapture the past glories of Final Fantasy VI or VII or X, but it gives me renewed confidence that this series is still capable of great things in the future  something that had been missing during the last decade.

If you enjoyed this Final Fantasy XV review, you're encouraged to discuss it with the author and with other members of the site's community. If you don't already have an HonestGamers account, you can sign up for one in a snap. Thank you for reading!

© 1998-2021 HonestGamers
None of the material contained within this site may be reproduced in any conceivable fashion without permission from the author(s) of said material. This site is not sponsored or endorsed by Nintendo, Sega, Sony, Microsoft, or any other such party. Final Fantasy XV is a registered trademark of its copyright holder. This site makes no claim to Final Fantasy XV, its characters, screenshots, artwork, music, or any intellectual property contained within. Opinions expressed on this site do not necessarily represent the opinion of site staff or sponsors. Staff and freelance reviews are typically written based on time spent with a retail review copy or review key for the game that is provided by its publisher.