Ovivo isnt as humble as it initially wants you to believe. With no warning, no padding and no tutorial, youre dumped right into the thick of it and forced to figure out the games mechanics and controls off your own back and on the fly. That might be a big ask, only Ovivo is commendably simple; you control a dot exploring a monochromic landscape and theres only three buttons required to do that.

Left and right is pretty straight forward, but relying on this alone wont get you very far. Roll only a few meters to your right and youll reach an impasse: a steep slope you cannot surmount. You could stop there and chalk Ovivo up as a short, sharp, powerful message about accepting futility, or you could press the spacebar. Doing this changes the colour of your dot and has it melt into the floor, turning up into down and down into up -- meaning that once harsh slope is now a friendly decline, easily surpassed. 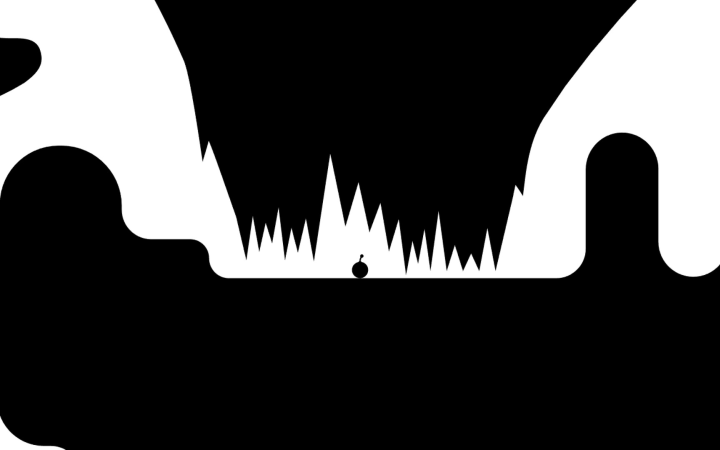 Ovivo is primarily about establishing a flow; of abusing your ability to shift your polarity on whim in order to break the normal definition of physics. Turning a rise into a slope will help you bypass the simpler of obstacles, but changing colour during your descent at the right time will force the two conflicting gravitational planes to slingshot your dot out of one chromescape into the next. Which will help you travel to new platforms once out of reach. Sometimes you need to string a series of these feats together to get to where you want to go, but failing could drop you in a jagged surface. Or have you descend to your demise. Or ascend. Or both!

This never becomes a huge frustration, because Ovivo subscribes to the rapid fire respawn philosophy of games like Super Meat Boy, paired with fair-minded checkpoints that rarely place you outside particularly punishing set pieces to reattempt over and over. Its a good fit for a game that loathes telling the player what to do, and the only way to advance its trial and error mindset without risking an endless stream of ragequits. Which is what makes its save function so bizarre. In short, it doesnt have one; you restart the game from scratch on every attempt. Ovivo isnt a particularly long game, but there are moments when perhaps a string of frustrating failures or a shortness of time lead you away from wanting or being able to play, and knowing that youll have to go through the same sets of trials each and every time you want to take the challenge back up isnt particularly inspiring. 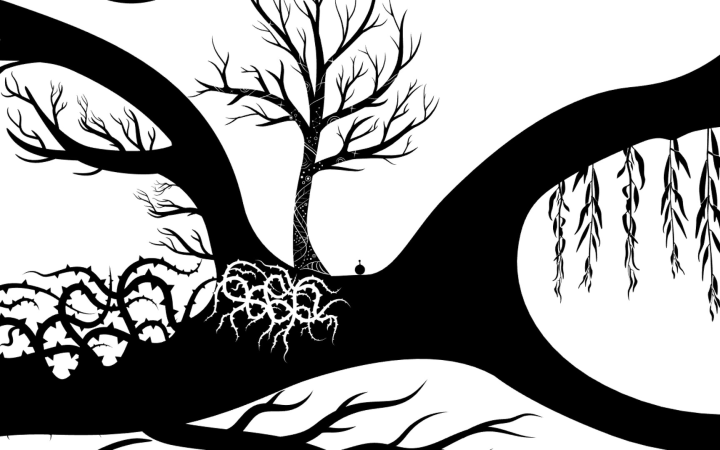 There are a series of collectable objects in each level that, perhaps, helps warrant multiple attempts, but collecting them doesnt seem to do a lot. Theres dots littered around the landscape, but these seem to exist mainly to give you an idea of the direction youre supposed to head in. Of slightly more substance are glyphs, the first three of which trigger achievements and the final larger one exits you from the map. Its only upon hitting that last glyph that Ovivo starts to look like it might be a little bit more than you were led to believe. The camera slowly pans back from the stage, and what seemed like a random parade of rolling terrain, spike pits and interspersed platforms becomes a more complete picture.

To Ovivos credit, these complete pictures get just as little explanation as anything else the game offers up, leaving any suggested meaning entirely open to your interpretation. The games casual pace combined with a laid-back soundtrack and soothing, simple graphics promote a chilled experience, but it was these glimpses at the finalised stages that ultimately drove me on. I was curious to find out what might appear next, interested in what  if any  connection I could form between them all as a finished gallery. Its a big strength of such an approach so open to interpretation that whatever meanings I might make could be completely different to anyone elses. It serves up a clever artistic edge, making the game as a whole more than its preliminary casual puzzle beginnings might have suggested.

Ovivo isnt as humble as it initially wants you to believe.
3/5

If you enjoyed this OVIVO review, you're encouraged to discuss it with the author and with other members of the site's community. If you don't already have an HonestGamers account, you can sign up for one in a snap. Thank you for reading!

© 1998-2021 HonestGamers
None of the material contained within this site may be reproduced in any conceivable fashion without permission from the author(s) of said material. This site is not sponsored or endorsed by Nintendo, Sega, Sony, Microsoft, or any other such party. OVIVO is a registered trademark of its copyright holder. This site makes no claim to OVIVO, its characters, screenshots, artwork, music, or any intellectual property contained within. Opinions expressed on this site do not necessarily represent the opinion of site staff or sponsors. Staff and freelance reviews are typically written based on time spent with a retail review copy or review key for the game that is provided by its publisher.