Before I get too deep into Bomb Chicken, it's probably useful to take a look at how complicated the control scheme is for this sidescroller. Naturally, the D-Pad or left stick moves your character. Press A to lay a bomb. Press B to lay a bomb. Or press X, Y, L, R, ZL, or ZR to lay a bomb. Ok, fine, so it's not complicated at all. Dropping bombs is all this chicken can do.

Now, don't go thinking that a one-button game is super basic. When this cute little (well, fat...) abomination of nature lays a bomb, it drops underneath you, raising you up one tile. Remember, there's no jump button, so this is your only method to get vertical. Also, you can drop bombs as fast as you can press your buttons, meaning you can go from being on the ground to atop a giant pillar of ticking explosives in no time at all. So rather than jump, you drop a ton of bombs until you're higher than the platform you're aiming for and then just fall onto it. Also, after laying a bomb, if you run into it you can kick it across the screen. And if you lay a whole host of bombs, you can kick the bottom one and the entire column goes flying. So you can kick bombs into enemies, or wait until they run into your stack. But be careful, because you can be killed by your own blasts, and there's plenty of obstacles along the way that will set off a bomb prematurely. Miyamato once said that a good mechanic is one that solves two problems at once. Well, not only does the bomb-laying mechanic solve two problems (platforming and combat), but it also creates a new challenge (more hazards)! 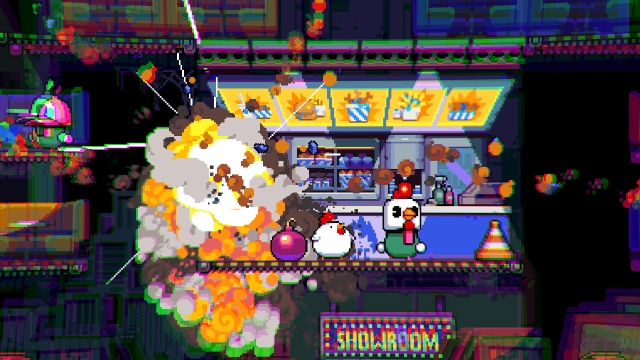 And that, in a nutshell (or egg/bombshell), is the beauty of this game. There's some basic puzzles, in that you must figure out how to manipulate your bombs across a series of obstacles. There's some basic enemies, where you must avoid them or kick a bomb or create a pillar and fall on their heads. That's just standard, early level stuff. Eventually, you will come to realize that the way to move forward is to enter a hazardous area filled with enemies or traps or whatever... and then make it more hazardous with your bombs. Once you lay that first bomb, your maneuvering room becomes smaller, and when you are around enemies that can trigger your bombs before the countdown ends, you have to move fast. A typical game experience involves walking into a room and observing it from a safe location. You see what threatens you, you see what needs to be done, you make a plan. Then you go in and execute the plan... and then panic when things go wrong. Then you start laying bombs like crazy to try to escape your mishap. But now it's even more dangerous, so you panic some more and just run and hope for the best... and then you die. B'gawk!

But you saw your error. So now you tweak your plan and try again. And then blow yourself up. But it was better! So try again. Ok, you screwed up and died quickly. It happens. Try again, and you panicked, argh! Calm down, try again, and you almost got it, you know you can finish it! So try again, drop 3 bombs, move, drop 5 bombs, kick them, create a huge pillar, and you drop down to safety as the bombs explode behind you. You did it! It worked! So now you get into a new room that's even harder!

Yes, that's something you wouldn't necessarily expect, but this game can be very challenging. The first dozen or so levels have a traditional level design approach: introduce you to a mechanic and then show several variations. But it ramps up quickly, and the last dozen or so are basically gauntlets that will keep you guessing. Platforms that disappear after a few seconds, or are destroyed by bombs. Blast waves from the bombs that can circle around and hit you. Turrets that move around the stage and can ignite your bombs. If you can imagine it, it's there. You will die. A lot. And don't expect to muscle your way through, because a single hit is enough to turn your chicken into dinner. Despite that, it never feels insurmountable, because the game is reasonably forgiving. Levels are short, with only 6 or so rooms each. You have a certain number of hearts (up to 10 I believe), and as long as you have one remaining you respawn at the beginning of the room rather than the beginning of the level. And to aid you even further, you don't lose a heart if you die in the first room of a level, just to be nice to you when you do something stupid. So it's challenging, but a surmountable challenge. And that makes it worth your time.

Unfortunately, while you're thankful for the brevity of these levels when you're trying to bomb your way past a nightmarish obstacle course, it does mean that this is a rather short outing (only 37 levels in all). With great skill it can be over in an hour, and even your first time through will only last 4 hours or so. There's roughly one secret per level that you can collect if you want, but that's about it for extending your playthrough. While you might have a hard time justifying a purchase given the short length, the short levels and the fun difficulty ramp makes this worth playing like an NES game of old, a game you would want to master rather than simply seeing the end and tossing it aside. Your skills will improve so much just from the first time getting through, it may almost be a relief to start right back up again and breeze through the intro levels, and perhaps see how well you can make it through those last few as well on the second time around. Unfortunately, the bare-bones nature of this game means no timer or death counter, so it's hard to track your progress, but it's a joy to do anyway.

To be honest, Bomb Chicken surprised me. I thought I'd get a cute, enjoyable, and ultimately forgettable puzzle platformer. Instead, I found myself hooked, getting frustrated at my deaths but determined to make it through, since I KNEW I could find a way. It all comes down to that clever mechanic of the bombs being necessary but also causing more mayhem. Once you lay that first bomb, you're committed one way or another, and you have to move. The urge to panic is so strong, but you need the ability to stick with the plan can see you through. Sure, it's a bit bare-boned, and it's definitely short, but the experience itself was an absolute delight.

If you enjoyed this Bomb Chicken review, you're encouraged to discuss it with the author and with other members of the site's community. If you don't already have an HonestGamers account, you can sign up for one in a snap. Thank you for reading!

© 1998-2020 HonestGamers
None of the material contained within this site may be reproduced in any conceivable fashion without permission from the author(s) of said material. This site is not sponsored or endorsed by Nintendo, Sega, Sony, Microsoft, or any other such party. Bomb Chicken is a registered trademark of its copyright holder. This site makes no claim to Bomb Chicken, its characters, screenshots, artwork, music, or any intellectual property contained within. Opinions expressed on this site do not necessarily represent the opinion of site staff or sponsors. Staff and freelance reviews are typically written based on time spent with a retail review copy or review key for the game that is provided by its publisher.