I'm not really sure how to make Clock Simulator sound super interesting to anyone outside of a very specific niche audience that may never even read this review, but take my word for it when I say the game did intrigue me enough at one point that I genuinely wanted to play it. And now I have.

The idea in Clock Simulator is that you are a clock, in much the way that you might be a surgeon or mayor or bus driver in some other "simulator" game. Some of those professions sound quite interesting indeed, and it's easy to see how they might provide fodder for some complex and rewarding experiences. When you're a clock, though, about all anyone expects you to do is keep time. You have that one job and you get it right or you get tossed in the bin. Neither success nor failure is actually all that interesting because there's no nuance. 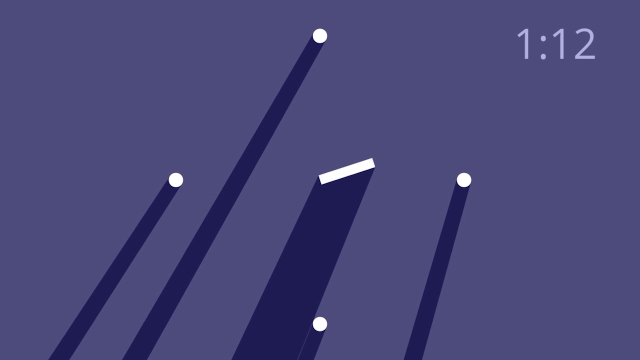 That brings us to Clock Simulator, which you play by pressing a face button on your controller once every second, or as close to it as you can manage. There are a variety of mini-games built around this basic concept, each one approximately as complex as one of those free-to-play, ad-supported mobile games that used to be really popular for some reason (because they were free, I'm guessing). Before you dive into any of the available diversions, you can "Learn to play" by selecting that helpfully labeled option from the menu. When you do, you are presented with the clock face and a clock hand. A meter fills on that hand, and you want to press the A button just as it is at its fullest. The game then tells you whether you were too fast, too slow, or just right. Start playing the proper mini-games and you'll find that helpful meter is gone. You have to get the timing right with little or nothing in the way of visual cues. The loud ticking of a clock is your constant companion.

The way things work in the typical mode is that there's some objective, like making the day last longer or summoning the spirits of time, and these rules have no direct impact on you except that the background may slowly change color as you make timing errors, or your clock hand will get shorter. Eventually, you fail. Then you get to admire your top score and try again, if it suits you. 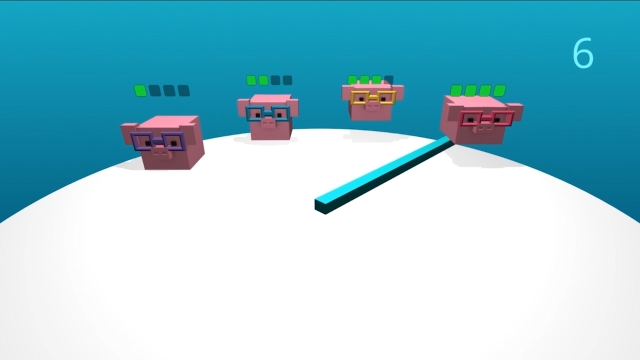 Fortunately, a few quirks are introduced to complicate things ever so slightly, including a couple of multi-player modes. In "Last pig standing," a clock hand rotates quickly around the face of the clock, and pigs are positioned near its top. One player commands each pig, and must press a button to make it jump and avoid the spinning hand. The winner is the last pig standing. In "Clock fight," players ditch the oinking barn animals. They instead guide clock hands and are allowed 5 mistakes. So all players must press a face button each second. The last one to mess up a total of 5 times--either by getting the timing wrong or skipping it altogether--is the winner.

Those two options lose their appeal rather quickly, and the remainder of the mini-games are solitary affairs. The most substantial of them is "Dungeons & Aliens," wherein the player must press one of two buttons as an icon shaped like a head and another shaped like a spaceship periodically appear along the left or right side of the screen, like a confused cuckoo. Colors change, which can throw a careless player off a bit, and pressing the wrong button ends the run. So it feels like a proper challenge, almost creative. 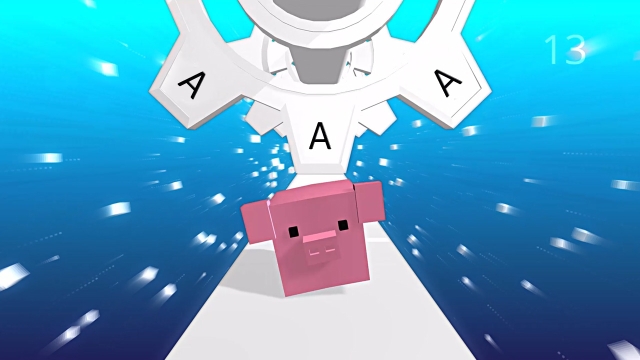 Another of the more interesting diversions is "It's XYAB time," which finds the player protecting a pig as it cruises along a lane suspended in space. Walls keep blocking the way, and you can rotate those walls to permit safe passage by pressing the button indicated. If you're not in time, a wall flattens the pig against the screen, like a bug against a windshield, complete with humorous sound effects and a funny little animation. My wife, who was watching me play, found this absolutely hysterical. She was on the verge of tears from laughing so hard. Then I challenged her to beat my record of 14 and she couldn't. So that finally quieted her down a bit and let me focus on safe passage for my bacon in training.

Because of how simple a game it is, Clock Simulator works fine on either a television with a JoyCon or Pro Controller, or in handheld mode with analog controls or even just finger taps. That last option is actually the method that I found worked best for me. I managed a score of 313 in "Test your skill," which was about twice as good as my previous best with the Pro Controller. 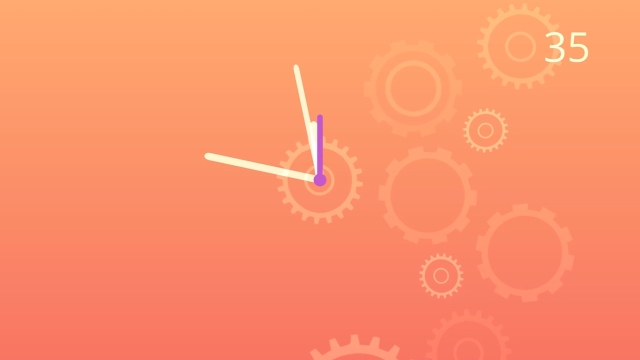 In theory, Clock Simulator offers enough unique modes of play to justify a purchase, particularly if you can find it offered on sale with a generous discount, but keep in mind that there's not enough difference between those modes to engage someone who is easily bored for long. Rhythmically pressing just one button at the same interval for minutes at a time gets old in a hurry. Whether you're doing well or sucking it up, the best reward you can hope for is a slightly higher number for your "Best" score, and there aren't even any leaderboards. The higher that best score eventually gets, the less likely you are to try to top it at a later date. Or at least, that's how it goes for me.

You heard it here first: I make a lousy clock.
2/5

If you enjoyed this Clock Simulator review, you're encouraged to discuss it with the author and with other members of the site's community. If you don't already have an HonestGamers account, you can sign up for one in a snap. Thank you for reading!

© 1998-2020 HonestGamers
None of the material contained within this site may be reproduced in any conceivable fashion without permission from the author(s) of said material. This site is not sponsored or endorsed by Nintendo, Sega, Sony, Microsoft, or any other such party. Clock Simulator is a registered trademark of its copyright holder. This site makes no claim to Clock Simulator, its characters, screenshots, artwork, music, or any intellectual property contained within. Opinions expressed on this site do not necessarily represent the opinion of site staff or sponsors. Staff and freelance reviews are typically written based on time spent with a retail review copy or review key for the game that is provided by its publisher.