Otems Defiance has delivered upon me seething rage. Proper bubbling bile, frothing in the pit of my gut that demands I throw the pad as hard as I can into my monitor in a petulant temper tantrum. The stories I could tell, the deaths I could recount, the fury I could bottle  and all of it particularly difficult to pin on the game. That makes it my fault. This makes me angrier still.

Otem is largely a twitch-based game that traps you in a number of circular arenas and then casually tries to kill you. It often succeeds. Your job, as a tribal sacrifice not all that keen on the sacrificial aspect of your career, is to run around the arenas various floors collecting power spheres to then fire at the weak spots on a revolving totem that dominates the centre. Only, its not best pleased at your attempts to do so. Youre a blood tribute, and your only role is to die.

As such, the totem has various underhanded methods to seal your demise. Its a stack of independent arseholes, for starters, meaning that no floors provide anything more than a temporary bubble of safety and things as pedestrian as jumping need to be regulated with a healthy dose of paranoia. It would be a lie of sorts to say that things start out simple, so lets try a subtle rephrase: things start out manageable. Theres an exploitable rhythm running through the first few arenas, where the totem stack spits the odd fireball at set intervals or slowly rotates three beams like a particularly deadly spoke. With a little practise, you can pick your way around these quite effortlessly. 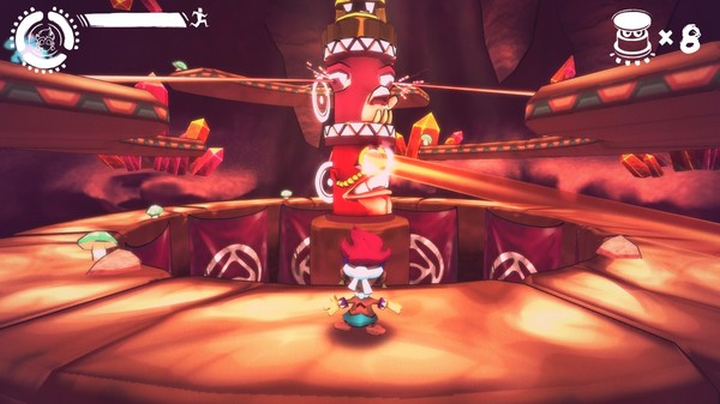 At this stage, the arenas are open and easy to navigate. They wont stay that way. Soon, theyll either force you into roofed corners that decimate your jumping ability, or throw out pitfalls like, er, pitfalls and spikes. Theyll stop you from traversing sections without jumping, forcing you to regulate two levels of threat simultaneously. And thats before the bloody totems start getting greedy and begin influencing floors they have no right to. Soon, lazy fireballs become a luxury; some spit out blobs of slimy water that slow your progress to a crawl, or materialise spiked mines that drop through levels and take up valuable room. You may want to prioritise taking these out first  especially if theyre stacked high and their influence is lethally increased. But its never going to be that easy.

Perhaps progression to the higher levels is governed by roving platforms you can only reach at certain times. Its not like you can chill on the spot and wait for it to turn up. Sometimes youll just get pelted with rapid fire thorns that cycle back on themselves out of spite, should you depend on what you judge to be a pocket of safety. Other totems spin gamely for a while before they catch sight of you and visibly track your movement, waiting for a prime moment to fire. The bloody spiral ones are the worst; they fire a gentle growing cone of circling plasma that you can usually avoid by standing at the precise centre of the attack. But at its furthest point, the spiral is bulbous enough to bleed into other levels. Its killed me countless times from the floor below because Ive been too busy trying to stay on top of the spinning head trying to kill me on that level to take note of the bastard beneath me sending pretty laser formations through the sodding platform into my feet. 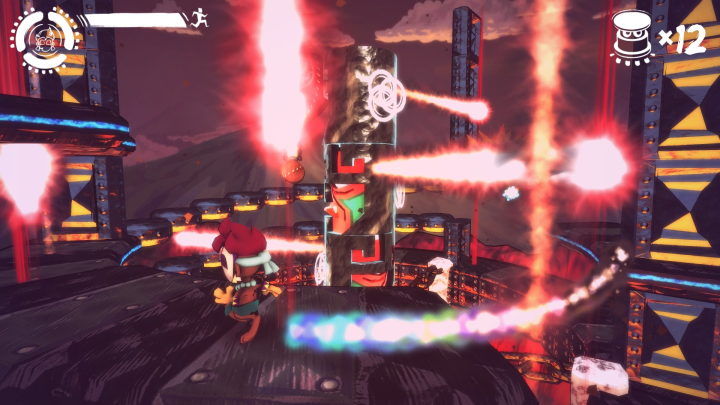 All the while, theres a village full of people who are annoyed youre not dead yet. Youre supposed to be appeasing the gods with your death, not taking them head-on with your reflexes. Their tale unfolds during comic book cutscenes popping up between arenas and culminating in a boss battle again the Shaman, the only thing that wants to kill you more than the totems. And thats all very commendable, but its Otems suffocating tightness that remains its best feature. If you put a solid run together, then you can probably see each standalone arena off in a handful of minutes, so when you eat any of your numerous deaths, youll have never have lost that much progress. In theory, at least; what you will have lost is the numerous little miracles that got you as far as you had. Like jumping into a confusion beam that remapped your keys and had you stumble around a fireball by pure chance. Or that mine powering down and vanishing a split second before you would have strolled into it.

So youll start again. Again. Confident that you can do better, that you can read the level a little quicker than last time, that you can react with a little more guile. Then you'll end up swearing at the lumbering uselessness of your sloth-like fleshy thumbs as you eat another death. You let yourself get cornered by a laser spoke under a roof and didnt have enough time to hop all the beams. That was dumb; there was a power up over there, but the spoke totem had multiple weak points you could have chipped away at first, slowing it down. You didnt pay enough attention to the totem above you and, when jumping to avoid something on your level, face-planted into a plasma bullet. You let the damn spiral totem get in the middle again, and it caught you through the ground on the top floor. It always does that, and I hate it.

And so Ill get up and pace the room for a bit, muttering things I cant repeat here. Then Ill sigh, sit back down, and try again.

If you enjoyed this Otem's Defiance review, you're encouraged to discuss it with the author and with other members of the site's community. If you don't already have an HonestGamers account, you can sign up for one in a snap. Thank you for reading!

© 1998-2021 HonestGamers
None of the material contained within this site may be reproduced in any conceivable fashion without permission from the author(s) of said material. This site is not sponsored or endorsed by Nintendo, Sega, Sony, Microsoft, or any other such party. Otem's Defiance is a registered trademark of its copyright holder. This site makes no claim to Otem's Defiance, its characters, screenshots, artwork, music, or any intellectual property contained within. Opinions expressed on this site do not necessarily represent the opinion of site staff or sponsors. Staff and freelance reviews are typically written based on time spent with a retail review copy or review key for the game that is provided by its publisher.