You wouldnt know that Ive successfully beaten all of Bombermans 100 levels by my first attempt to play it again for this review. One of those slow, bobbing orange balloons took a look at me and I exploded. Mustve figured me for a chump. Pretty well on the mark, too, as the game has a entirely different expectation of its players than modern era titles do.

Or would it be more accurate to say that it had no expectation of its players? It certainly seems that way, but then my introduction to the console and game itself was shall I say ... sideloaded. Back in the day our family had a friend who visited Japan on a regular basis, and on two occasions hooked us up with what I thought were Japanese NES consoles. I later learned the first was a knockoff of the Famicom, and the second was a legitimate Nintendo console.

It may be noteworthy to say that our next console was a wholly legit Super Nintendo, so theres that.

The carts our friend brought back were another story, and Bomberman was part of a very smartly designed 52-in-1 cartridge. Powering on the unit gave access to one half, and resetting it would load another menu with the remaining games. It was a delight and my family and I got a lot out use and playtime out of that cartridge. Unfortunately I didnt manage to hang onto them ... but enough of that. If that seems like padding for what is going to be a short review, thats only true in part.

There was a manual on the back of the cart for the multicart, in Japanese - maybe? - but no manual for the now classic selection of games locked into the carts ROMs. Fortunately Bomberman isnt mechanically complex, being the first of its franchise on home consoles. Clad in a white catsuit and hood, and blue bodysuit, you run around searching for blocks that can be blown up, a powerup, some enemies and then a door to the next level. Rinse, die, repeat until you become Lode Runner. Yeah. What?

In-game universe curios aside, the aesthetics of Bomberman are simple and the level layout is even more basic. A regularly spaced amount of indestructible bricks have arrayed around them blocks that will - sometimes eventually - uncover your goals. This is all laid out on a rectangular grid that is always the same size. As the stage counter increases, so do the amount of blocks you have to demolish to accomplish your unstated goals. Also, whilst you scurry about, youve got to keep on the lookout for enemies that will cause you to lose a life and restart the level if touched. This is important because you have to defeat them all in order to exit the level, and youve only got 270 seconds to do it all. 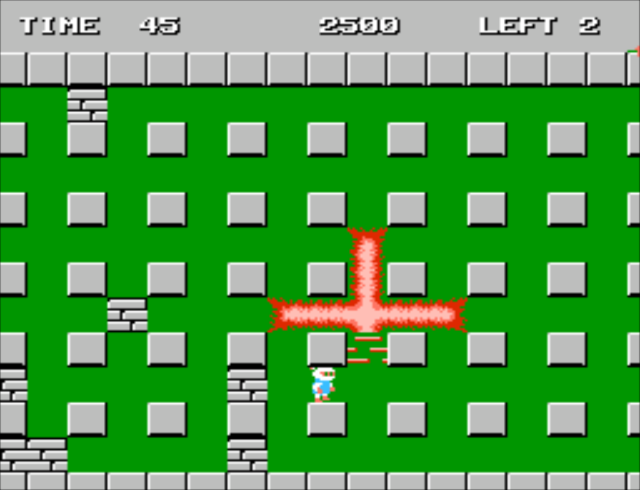 Bombermans singular weapon delivers its payload in a cross pattern that reaches just one block outside of itself, and then one further each time you grab a range extender powerup. Youll keep this and your bombs-in-succession count powerups when you die, but nothing else - not even your nifty skates. Or whatever it is thats giving you that speed boost. Our little heros bag of tricks is more of a hip slung satchel, this time, having very few tricks on offer.

The powerups have been painstakingly designed to be essential to gameplay, which is preferable to abilities that are unremarkable or forgettable as happens in later titles. There arent any fruit, clocks, gloves or bomb-bootin boots to pick up. Okay, here we go, Im going to guess at these names, just like I did back in the day: Speed Boost, Bomb Trigger, Bomb Count, Range Extender, Bomb Walker, Ghost, Fire Vest and... yeah thats it. Youre going to need every single one of these to get to the end of this er... run.

If you were schooled in more current iterations of the franchise, you might not be prepared for the aggressive enemy progression and difficulty thats going to be thrown at you here. The limited selection of enemies may not impress, but going toe-to-toe with them will give you a different perspective, and perhaps respect for what the programmers were able to achieve inside of 32KB of code. Thats 32 times the size of Asteroids for the Atari 2600, which isnt a picnic either.

As a point of reference, even Quest of Dungeons occupies 69MB of storage on the Nintendo Switch.

Yes that is respect youre detecting in my tone. These games have a reputation for being hard; polishing your skills against this code can help you to develop reflexes and at times an attitude about cushier modern games that spend more time hand holding. Minecrafts success isnt attributed to its tutorials, no sir, and no I am not digressing.

Enemy variety is also on a very low side as well, but they will surprise you. Even the lowliest of enemy is capable of turning and catching you off guard when you least expect it, so your best option is to not give them the chance. Right after your introduction to the orange balloon that gave me my wakeup call at the outset, youre introduced to what looks like a water onion that moves very quickly and rather sneakily. The next is what looks like a purple hair scrunchy with eyes, followed by an orange cat - theyre quite aggressive. 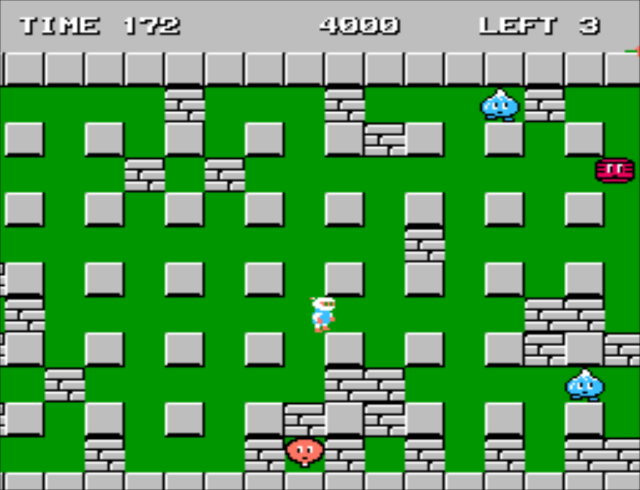 Then there are the intangible types: Two varieties of ghost, one slow, one fast, and lastly a scary fast gold coin to round out the selection of baddies roaming the explodable halls of green and steel grey. Beware that if you exhaust that 270 second timer, a host of gold coins will hunt you down before you can even make the lobby. Door. I meant door. Dangit Coulson...

While it is possible that the developers had little to no expectation about the proficiency of their players, they were apparently sensitive to what constitutes a reward, as beating a level will grant you an extra life, and theres no practical limit to how many you can accumulate. Overall, once you master the fundamentals of Bomberman, beating the game isnt what Id actually call difficult.

You could say I was incentivized by my limited access to games, but that wasnt remotely true. Not only did I have the likes of Super Mario Bros 3, Megaman 3 (on a different carts), Ice Climbers, B-Wing (look it up), Battle Tanks... well, you get the idea, right? With more than I was even interested in playing, it was the challenge of these games that brought me back over and over again. That said, I dont miss the 10 second loop of music that only changes when you grab a powerup... youll never hear me say that the marching progress of silicon isnt without reward.

It may interest you to learn that Bomberman had more serious story than we turned out to enjoy in the West. Desperate to escape, all he had was his bombs to defend himself and find a way out of prison... yeah, even for 1985, thats kinda dark. It didnt mesh well with the bright colour palette and energetic presentation, but since we didnt know what was going on anyway, course correction was easy to do. If youre up for a challenge, or curious about the origins of the series, this retro classic is worth a look.
4.5/5

If you enjoyed this Bomberman review, you're encouraged to discuss it with the author and with other members of the site's community. If you don't already have an HonestGamers account, you can sign up for one in a snap. Thank you for reading!

© 1998-2020 HonestGamers
None of the material contained within this site may be reproduced in any conceivable fashion without permission from the author(s) of said material. This site is not sponsored or endorsed by Nintendo, Sega, Sony, Microsoft, or any other such party. Bomberman is a registered trademark of its copyright holder. This site makes no claim to Bomberman, its characters, screenshots, artwork, music, or any intellectual property contained within. Opinions expressed on this site do not necessarily represent the opinion of site staff or sponsors. Staff and freelance reviews are typically written based on time spent with a retail review copy or review key for the game that is provided by its publisher.