My only specific request for my wedding day, besides the obvious one that my future wife make an appearance, was a healthy supply of Jelly Belly candy for our guests. I guess you might say I was a fan of those sweet confections, and as the 15th anniversary of that day rapidly approaches, not much has changed. When I recently discovered that someone had put together a video game based on the sweets, I couldnt resist.

Jelly Belly: Ballistic Beans is available on multiple platforms, but I chose to go with the Wii version. It was extremely affordable, and still is at the time of this writing. I figured that at the very worst, Id spend $7 or $8 on a game I wound up hating, and at best Id find another reason to appreciate the Jelly Belly brand. Fortunately, the developers at Blue Monkey Studios produced an experience that for the most part justifies the latter reaction.

When you start playing Ballistic Beans, you start by creating one of up to three profiles to track your progress, which I suppose is a nice feature if the game finds its way to a household full of gamers who like to accomplish things on their own. Progress must be made in each of three standard singleplayer modes--Beantastic, Collect the Letters, Clear the Table--and two additional modes become available as you earn medals based on score and time spent. 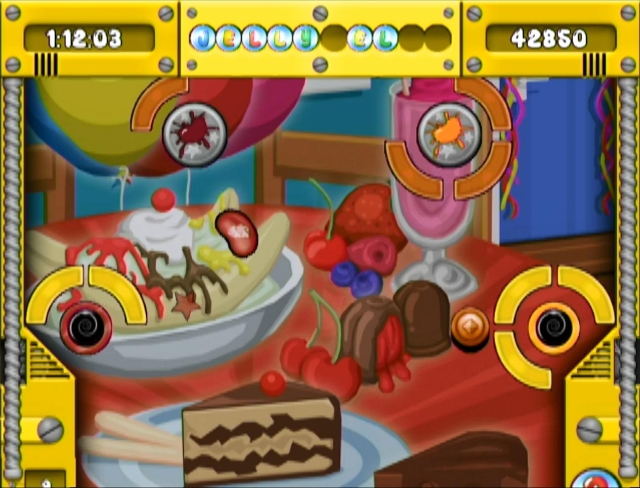 Most modes play in the same general manner, with only slight variations. The basic process resembles an inverted game of Peggle. A launcher is positioned along the bottom center of the table that makes up a given stage. You have a supply of beans waiting in a tube on the left side, and one drops down to your launcher at a time. You can swap one bean out for the next, or you can fire the one youre given. The projectile will then ping pong around the space, bouncing off and sometimes eliminating bumpers, before finally heading back toward the base of the table like a pinball. You can turn the launcher left and right by tilting the Wii Remote, which will hopefully allow you to collect the bean. You win if you satisfy the mode and current tables objectives, or you lose if your supply of beans is exhausted.

The Beantastic mode is clearly the main attraction. It offers some genuine depth, particularly in the last 15 or so stages. You can collect the letters that spell out Jelly Belly at a rate of two per table, and finding all 10 within a themed group of five tables unlocks a table in the special Spill the Beans mode (which Ill tell you about momentarily). Otherwise, your goal is simply to drop beans into special holes that are usually buffered by bumpers. Quickly, complications arise. For instance, you can only deposit beans of a certain color in many of the holes, and sometimes youll have to first pass a bean over a paint spill (to change its flavor) or youll have to place it in a washing machine to mix with another designated hue and create a special bean. Power-ups are also available, but they rarely have any significant impact beyond increasing your supply of beans. If you run out of beans of the wrong color, you will be unable to complete a stage, so its important to develop a strategy as to which tasty morsel you fire at which point, and its best to take risky or test shots with the more disposable flavors.

Collect the Letters mode simply requires you to grab 10 letters on each new table, while working with a more limited supply of beans, and Clear the Table turns its attention to debris that you must eliminate. Both modes feel simple compared to Beantastic, but theyre still fun and nice diversions if you want a bit of a break from the more complex main attraction. Spill the Beans diverges more noticeably from the standard design, however. You move a hand on a stick, using the Wii Remote. Various colored beans fly in from the edges of the circular play area, and you must snatch up as many of them as possible while avoiding floating fruit that penalizes you. There are only eight rounds, one per theme you clear in Beantastic, which means the mode is quite shallow. Still, I enjoyed it a bit.

What I didnt enjoy so much was the occasional control quirk that left me unable to turn my launcher at key moments. For the most part, the Wii Remote works fine to control everything, but when it loses contact with the sensor bar, you might not have time to recover before a bean drops down a chute. In early stages, its not a big deal. By the time you hit the seventh and eighth themes, though, every bean counts and even an occasional loss of control is needlessly frustrating. 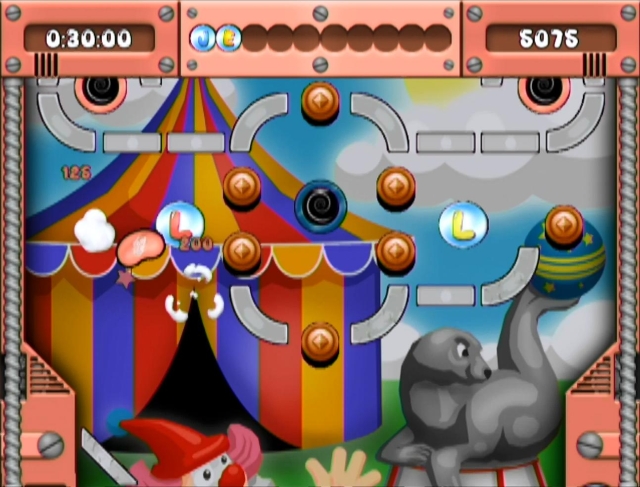 Another problem is that, differently from Peggle, the whole table in Ballistic Beans is not viewable all at once. The camera is zoomed in closer than feels strictly necessary, and it sticks close to the bean. If you launch said bean and it flies up toward the top of the area, then careens wildly, it might suddenly plummet toward the bottom of the play area again and youll have to quickly tilt the Wii Remote to hopefully catch it. Certainly, thats often doable, but it doesnt feel quite player friendly. I wish the perspective had been a bit more removed to prevent such moments from ever posing an issue.

In spite of such minor complaints, though, Ballistic Beans provides a robust puzzle experience. There are forty tables in each of four modes (counting one that is only unlocked if you earn gold medals in each of the Beantastic stages), for a total of 160 proper stages. The eight bonus stages are a nice touch also, and bring the final tally to nearly 200 stages. I reckon most players will have to spend something like 10 or 12 hours to clear everything, which is more than enough time for the gameplay to grow tedious but still a nice value if you dont do everything all at once.

Most people will probably never notice that Jelly Belly: Ballistic Beans even exists, despite the branding. Its a fun puzzle game with plenty of content and solid design, though, and thats worth some consideration. I wouldnt recommend making the title a priority purchase, but its a nice treat if you find it lurking in the bottom of a bargain bin or taking up space at the local used games shop. A gamer on a budget could certainly do much worse!
3.5/5

If you enjoyed this Jelly Belly: Ballistic Beans review, you're encouraged to discuss it with the author and with other members of the site's community. If you don't already have an HonestGamers account, you can sign up for one in a snap. Thank you for reading!

© 1998-2020 HonestGamers
None of the material contained within this site may be reproduced in any conceivable fashion without permission from the author(s) of said material. This site is not sponsored or endorsed by Nintendo, Sega, Sony, Microsoft, or any other such party. Jelly Belly: Ballistic Beans is a registered trademark of its copyright holder. This site makes no claim to Jelly Belly: Ballistic Beans, its characters, screenshots, artwork, music, or any intellectual property contained within. Opinions expressed on this site do not necessarily represent the opinion of site staff or sponsors. Staff and freelance reviews are typically written based on time spent with a retail review copy or review key for the game that is provided by its publisher.