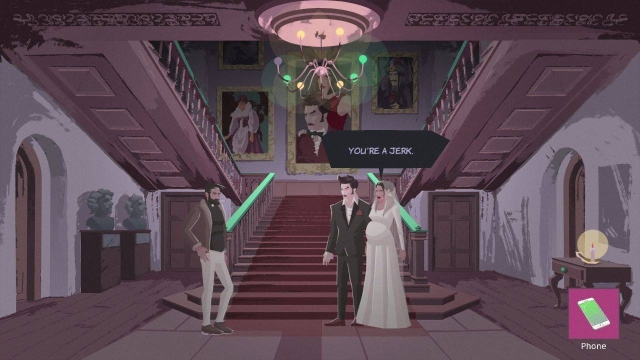 The Unholy Society walks a fine line between zany, cheesy mayhem and outright cringey material. It stars a skateboarding, wise-cracking priest/professional exorcist/private detective named Bon Horowitz, who must travel back to his hometown to officiate his sister's wedding. However, some nasty stuff goes down and Bon ends up accused of murder. So now he not only needs to prove his innocence, but also battle the forces of darkness while making snarky comments.

Just to be clear, Bon isn't your average clergyman. He may don a clerical collar, but he's far from a holy man. The moment we meet he dude, he's in bed with a woman he met on a Tinder knockoff. A quick perusal of his in-game smart phone also reveals a handful of other tidbits about the dude, including his social reclusiveness and apparent love for Instagram (renamed to something similar within the game, obviously). He also has a penchant for swearing, sarcasm and internet lingo. He doesn't come off as merely a parody of millennials, but seems to be a caricature of older generations' perception of them: a loutish, crude, tech-savvy padre who solves mysteries, alienates himself, arranges causal meetings, slays demons and calls the pope when he's in a bind.

Society's world is a weird, yet colorful one. Every environment resembles a comic book panel, done up in a mixture of styles that also call to mind the garishness and excess of the '80s and early '90s. Bright pink, lavender and violet cover the screen pretty often, joined by some darker hues that emphasize the game's horror elements. With all of these colors meshing wonderfully, you mosey from beautiful Hawaii to Silent Virginia, an obvious reference to Konami's famous fictional city (as evidenced by its copious fog, sudden drop-offs in the street and bloody hand prints everywhere). 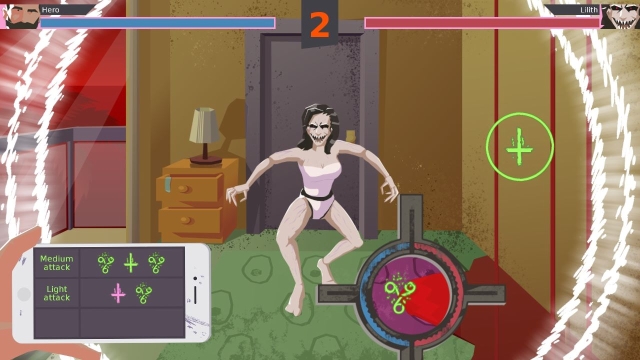 Pop culture and horror movie references abound, from a showdown with a ghostly girl similar to Samara/Sadako of "The Ring" fame to a blatant "Twilight" riff in the form of Bon's soon-to-be brother-in-law Eduard (who bears a striking resemblance to Robert Pattinson). For the most part, these hat tips and parodies mesh well with the ridiculous comedy, mostly because they remain in keeping with the game's jokes revolving around modern culture, tech and works of horror. But at the same time, who the hell still makes fun of "Twilight" these days? You're about five years late to that party there, folks.

Honestly, I find it difficult to give this game a sweeping recommendation, because its humor and admittedly well-written dialogue isn't going to win everyone over. Plenty of people won't be able to see past the title's cheesiness, and will ultimately view it as a unrepentant oddball piece that doesn't take itself seriously enough. On top of that, the modern social network-esque lines will definitely grate some nerves. Personally, I dig the plot because it's like experiencing a mad fusion of comic book, a B-movie, a retro graphic adventure, a blog and an animated sitcom.

A graphic adventure, you say? Complete with inputting commands and inventory-based puzzles? Well, not quite, but the spirit is present. The campaign involves investigating things where prompts are offered, picking up items and using them in different places. However, the game keeps most of those mechanics to a minimum, focusing instead on dialogue, plot and combat. You might find a rubber ball somewhere and use it almost immediately on a pissed off cat, or gather a couple of items for a disguise to help you slip past police. None of these objects are deeply hidden, and campaign's flow is almost entirely linear. You shouldn't run afoul of a single puzzle that stumps you for long. 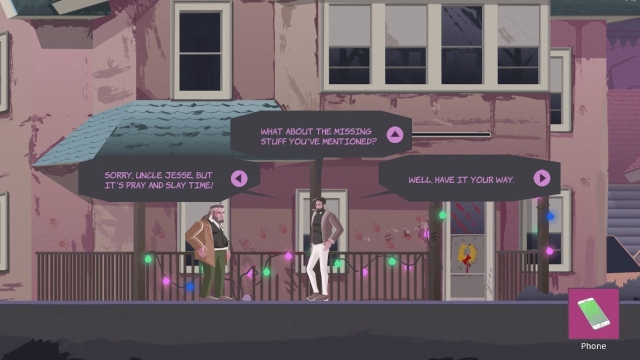 Battle is the only thing that might (quite literally) stop you dead in your tracks. As you are a man of the cloth, you defeat your foes by exorcising them. No, Bon doesn't do it by throwing holy water and yelling, "The power of Christ compels you!" Rather, his smart phone features an app loaded with spells, which work in conjunction with a special cross he carries with him. The cross has a sort of lens built into it that allows him to peer into the grisly, dark world beneath ours. There, unseen blood lines the walls, random body parts jut out of boxes and hidden sigils wait for our hero to notice them. By capturing these symbols in a particular order, Bon can execute a certain attack. For instance, a pair of stars not only heals him, but also deals a tiny bit of damage to his opponent. On the flip side, two inverted crosses and a star harm Bon, but also deals massive damage to the opposition.

Of course, you don't have all the time in the world to find these runes, as your enemy attacks after several seconds. The sigils reset their locations every time you or your opponent strike, though they tend to appear around the same areas after each reset.

The first few conflicts are easy enough to blow through with little effort. Early on, you destroy a succubus and eventually take on a vampire. After that, though, your altercations become much deadlier. Soon, you eliminate two adversaries in a single battle, with the second one stripping of sizable portions of your hit points with each blow. Not long after that, you meet a creature who occasionally hits you with weak strikes or poison, but occasionally busts out a crippling blast. Thankfully, you find items during your travels that either heal you or activate buffs. Even better, these goods don't vanish after use, and only require a little time to cool down. 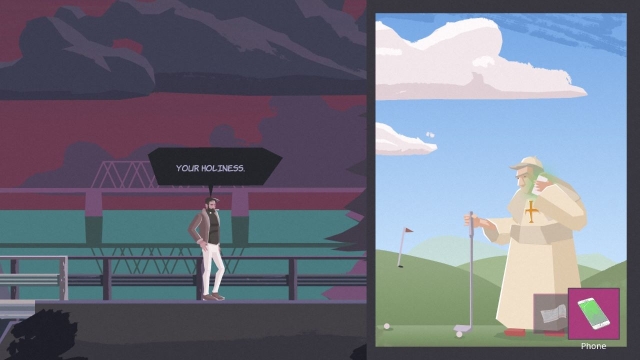 Unfortunately, fights also represent one of the game's stumbling blocks. Although you learn five or six spells, you can only equip three of them at a time. Each battle only spawns certain symbols, so you don't always know whether or not a spell will even be usable during a particular fight. In other words, you might grab the healing spell before an encounter, only to realize that only one star appears at a time during that bout. So now you're stuck with a useless ability, and you'll either need to make do with the ones you have or die and retool your arsenal.

Honestly, the game's combat is inventive and simple enough work well in an adventure game. Though some encounters can be tough, they're seldom so overwhelming that you'll want to rage quit. Even the hard ones can be easily completed if you form an effective enough strategy and ready useful spells.

Society ends after only a couple of hours, promising another act later. It's not clear if this game is actually the first installment in a series of episodic titles or a standalone entry that will receive a sequel. Either way, I look forward to experiencing more cheesy, snarky goodness, though hopefully next time we'll see an improved battle system and fewer "Twilight" jokes.
4/5

If you enjoyed this The Unholy Society review, you're encouraged to discuss it with the author and with other members of the site's community. If you don't already have an HonestGamers account, you can sign up for one in a snap. Thank you for reading!

© 1998-2020 HonestGamers
None of the material contained within this site may be reproduced in any conceivable fashion without permission from the author(s) of said material. This site is not sponsored or endorsed by Nintendo, Sega, Sony, Microsoft, or any other such party. The Unholy Society is a registered trademark of its copyright holder. This site makes no claim to The Unholy Society, its characters, screenshots, artwork, music, or any intellectual property contained within. Opinions expressed on this site do not necessarily represent the opinion of site staff or sponsors. Staff and freelance reviews are typically written based on time spent with a retail review copy or review key for the game that is provided by its publisher.