When Nintendo released Super Mario Run a couple of months ago, a number of vocal gamers took to social media to express their outrage. Here Nintendo was, finally bringing Mario to smartphones, and yet the company had the nerve to charge for the game. Aren't mobile games supposed to be free?

Though Super Mario Run broke download records and went on to generate millions of dollars in revenue, it wasn't precisely what shareholders had in mind when they pressured Nintendo to pursue mobile development. What they really wanted was a taste of some of that delicious free-to-play revenue. I can practically picture them piling stacks of paper currency on a plate, drizzling cheese sauce over the small fortune and going to town with a fork and knife. Don't forget your bibs, guys, or you'll ruin your suits!

Fire Emblem Heroes, a clever new strategy title that leverages another favorite franchise but doesn't make the "mistake" of locking most of its content behind a pay wall, is a shareholder's dream come true. And as a spiffy bonus, it shouldn't immediately elicit angry outbursts from players who are insulted by the notion that someone would dare to charge for a mobile video game (never mind that numerous publishers do that all the time). Free Nintendo games on mobile devices was always the dream, and that dream has at last come true. Unfortunately, Nintendo's first serious stab at free-to-play stardom needs some polishing before it can truly shine. 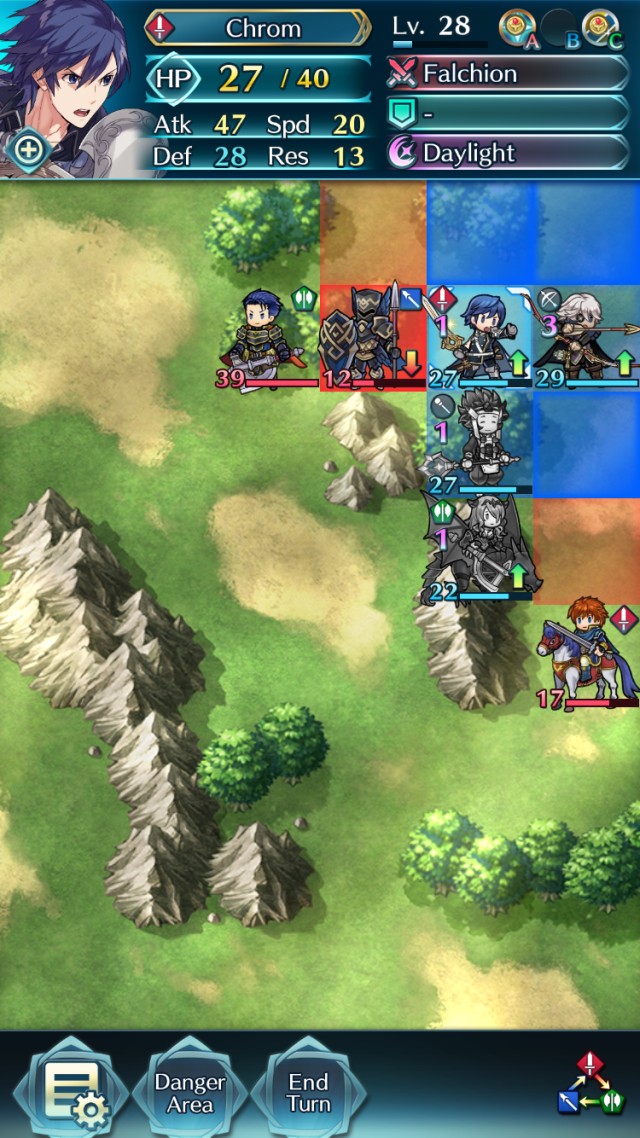 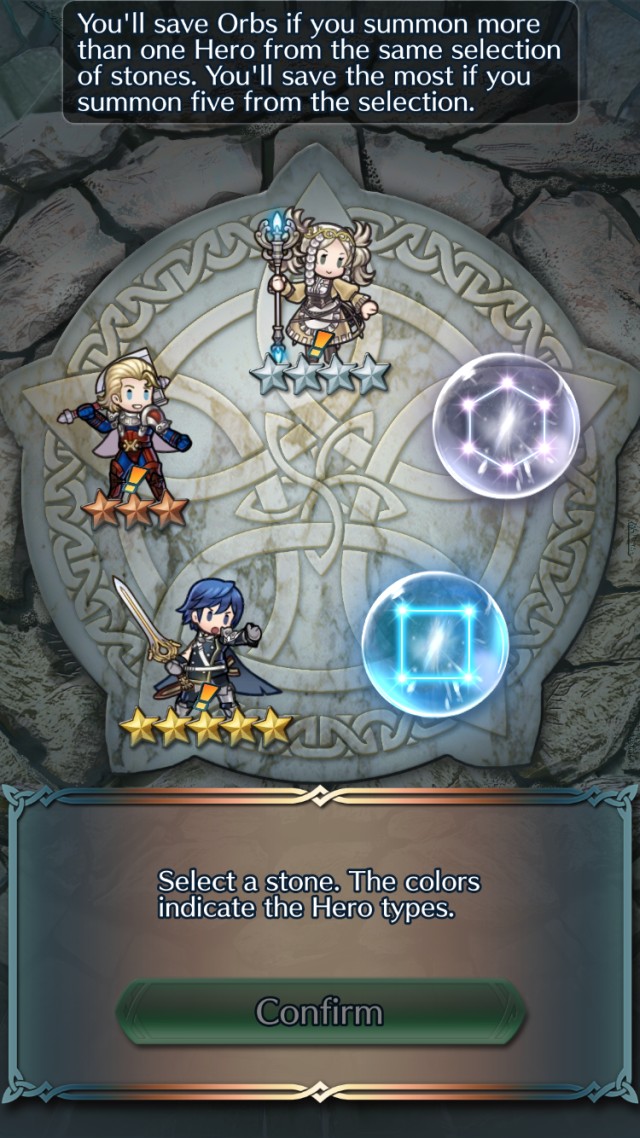 The Fire Emblem series has been around since 1990 (in Japan, though it didn't arrive in North America until a Game Boy Advance release in 2003). In the years since its debut, the franchise developed a worldwide following thanks to its captivating plots and--more importantly--thrilling turn-based combat. Infamously, there are no revive potions. The heroes you lose in battle stay dead, and it's possible to quickly paint yourself in a corner if you make enough mistakes in short order. Even if you don't suffer too much, it stings to lose a warrior after investing hours in his or her future. And battles tend to be very difficult. Everything can be going swimmingly, until suddenly a fierce opponent carves a bloody path through your ranks and leaves you on the verge of tears. Nintendo's games don't get any more hardcore than that.

When bringing Fire Emblem to mobile devices, the developers at Intelligent Systems made some understandable changes. First, they got rid of the perma-death mechanic. After all, losing a character you may have spent real money to purchase would have crossed a line that most of us wouldn't have found acceptable. The interface, though never difficult to grasp, has also been simplified. Quick swipes allow you to access your units, customize their learned skills, change party composition and lead a smaller group of four warriors in heroic battle. You shouldn't have any reason to miss the d-pad, in part because the genre rewards skill rather than reflexes.

Fire Emblem Heroes also is quite pretty. It's loaded with gorgeous character portraits, which don't ever hang around long enough to wear out their welcome. Battles still play out on an invisible grid. When two units meet, the camera shifts to a new perspective and you see them facing off from the side. The background artwork during such moments is beautiful, providing a welcome sense of depth. Special moves are illustrated by action shots that slide briefly across the play area, making it clear when something important is happening as you grit your teeth and hope your units have sufficient HP remaining.

I thoroughly enjoyed the first few days that I spent with Fire Emblem Heroes, because at first there's a lot to see and do. The story campaign revolves around you, a new hero who has been summoned to a fantasy world to lead a group of soldiers to victory. There are other portals all over the place, and various members of the Emblian Empire are using them to summon powerful heroes from past Fire Emblem games, so that they can force them to chop you from the picture. I didn't feel like the plot went anywhere particularly interesting in the nine chapters that are currently available (the story ends with a cliffhanger, so I assume that more to the tale is eventually coming), but at least it provided framework so that I knew why my army was fighting. 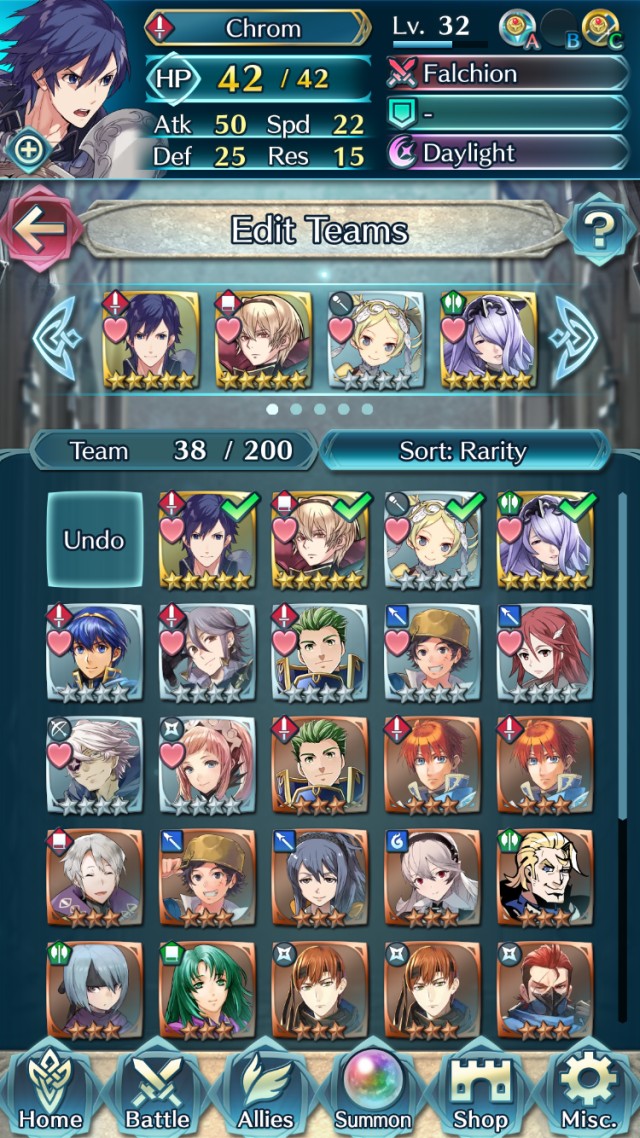 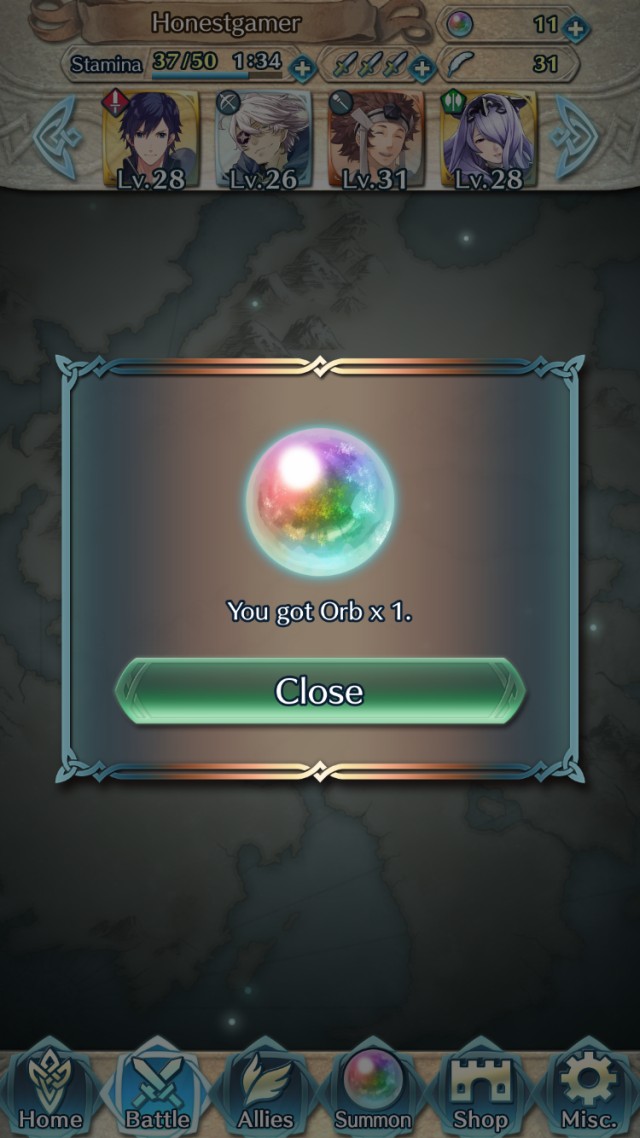 As I continued playing, though, I began to enjoy myself less. When I finished the nine chapters, there wasn't much left to do except revisit them on a higher difficulty setting. Enemies were suddenly tougher, so I had to keep grinding to improve the various characters that I had recruited to my cause. There's a constant push to keep developing them, which is fine, but eventually there's no way to progress at anything more than a snail's pace unless you spend money on superior heroes. By my estimate, turning a 4-star character into a 5-star one will require around 3 months of work, and that's just a single hero.

The way the system works is that you draw characters at random. If you go for a few at once, the cost for each individual shrinks, such that summoning five at a time costs 20 orbs instead of 25. There are dozens of characters, though, and no guarantee that you'll draw one you love even if you spend 80 orbs. Your likelihood of finding a 5-star character increases over time, but even when you finally obtain one, it could be one you hate. None of that would be so bad, if only orbs weren't so difficult to obtain without spending real-world money. You get a single orb for clearing a stage the first time (but only the first time), and right now there are only around 50 standard stages. If you spend those early orbs foolishly, they're gone for good. If you are smarter and fortune favors you but you still wind up drawing a group of uninteresting characters, well, that's just bad luck.

Of course, you can always spend your hard-earned cash and fix the problem with money. To get just over 20 orbs (which feels like a reasonable minimum), you would have to invest $12.99. That will probably get you a decent character or two. Then again, it could also snag you a duplicate of one you bought previously. There's no telling, and there are no refunds.

Many players will decide not to be whales. They will play without spending a single cent. And if they're like me, they will clear the available story, run through it again and get almost to the end a second time (on the higher setting) before realizing they are now constantly running out of stamina that might let them battle more, and probably won't be able to summon new heroes for weeks. All that's left to do then is play through training stages, or participate in three quick arena battles per day, or wait for an event map to come along. The game simply doesn't give a person a good reason to return regularly.

Fire Emblem Heroes has some neat systems at work. They provide a compelling experience, at first. I love the visuals and a bunch of other tiny little details that wouldn't look like much if I were to list them here. Intelligent Systems has been making these games for years, and this newest entry is terrific... right up until it isn't. The honeymoon ends and you're left with a partner that constantly wants your money but doesn't have much to offer as a reward if you choose to comply. Free-to-play is more difficult to get right than most people realize, and Nintendo is still learning the ropes. The game may have time to evolve and become something amazing and enduring, but it's not there yet.
3/5

If you enjoyed this Fire Emblem Heroes review, you're encouraged to discuss it with the author and with other members of the site's community. If you don't already have an HonestGamers account, you can sign up for one in a snap. Thank you for reading!

© 1998-2020 HonestGamers
None of the material contained within this site may be reproduced in any conceivable fashion without permission from the author(s) of said material. This site is not sponsored or endorsed by Nintendo, Sega, Sony, Microsoft, or any other such party. Fire Emblem Heroes is a registered trademark of its copyright holder. This site makes no claim to Fire Emblem Heroes, its characters, screenshots, artwork, music, or any intellectual property contained within. Opinions expressed on this site do not necessarily represent the opinion of site staff or sponsors. Staff and freelance reviews are typically written based on time spent with a retail review copy or review key for the game that is provided by its publisher.