The original No More Heroes is crude, filled with exaggerated violence, littered with explicit language, and is generally goofy. A Suda51 game, basically. Now what happens if you remove all those things and focus on the actual gameplay and overall design? What you're left with is a third-person action game wrapped around a very frustrating structure that wastes the player's time. If you want to even start a normal stage, you have to perform unnecessary Point A to Point B to Point C to Point A activities: you need money to start a stage, meaning you have to do minigames a couple times, meaning you have to drive across a lifeless city numerous times. THEN you can start the stage. It gets old quickly.

Gratefully, No More Heroes 2: Desperate Struggle completely removes tedious travel across the city. In its place is a simple menu screen to certain locations: minigames, shops, stages, and side-stages, and better yet, there's no fee requirement for entering main stages. Thus, you're allowed to get to the action quicker as protagonist Travis Touchdown, returning to the city of Santa Destroy after three years absence, again climbing the ranks to become the top assassin after a friend was murdered. With a beam Katana in hand, which was won at an auction, you'll battle several assassins in another crude tale filled with exaggerated violence, littered with explicit language, and with an abundance of goofy moments. 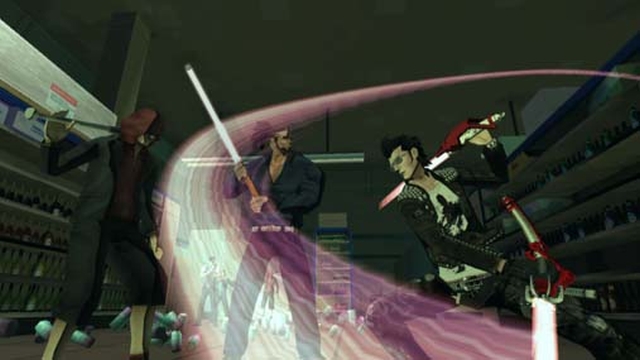 The opening tutorial fight, for instance, has Travis fighting a spike-haired fellow with a long sword, an obvious nod to a famous JRPG character. The fight concludes with the guy's decapitation, head conveniently landing back on his neck, where... he's still somehow alive and mocking Travis. Another bizarre moment occurs when Travis walks into a room where the forthcoming boss is being fondled by two women in bikinis. The guy proceeds to throw the women right at Travis in an attempt to sneak in a cheap attack. Without hesitation, Travis and the boss end up clashing swords, slicing the women to pieces. In an odd contrast later, Travis refuses to murder a deranged stalker that was trying to kill him a few seconds prior...

Without a doubt, Desperate Struggle and its predecessor don't take themselves seriously. Regrettably, the same can also be said about the design of both games. Yes, city travel is gone, which would be considered an "improvement" if this was another game, but it ultimately doesn't amount to much if all other negatives survived the transition; it just means you get to the bad stuff quicker. The flow and action is so generic, especially when compared to similar action titles of its day, that the game becomes instantly tedious by the beginning of the second stage. If anything, this follow-up feels like a copy-paste of the original: you'll run down countless corridors and hallways, whether it be bland warehouse districts or dull stretches inside a mansion, fighting only three to four different enemy types that involve fists, stick-like weapons, or guns. Sound familiar?

That's literally the entire experience from a gameplay standpoint. 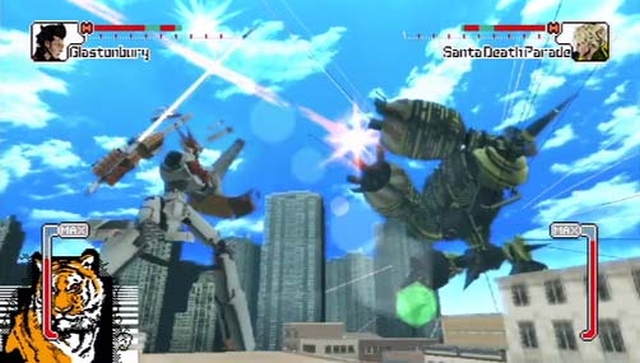 Enemies are apparently supposed to be a threat with their attack "patterns," but once you figure out the correct fast or slow maneuvers to use on the right foes, it really just comes down to mindless button mashing. That's something you don't want to encounter in a game with a very basic combat system and so few enemy types. Granted, you will get hurt or knocked down, but not enough to make you sweat, and in tough situations of too many enemies on screen, you can just build up for the special attack and target opponents with bigger health meters while being immune to damage. The "worst" it gets with encounters is having to deal with two to three gunmen in a crowd of brawlers, because their accuracy and bullets can pin you to the floor quickly. But that's not really a "challenge," that's just the game being cheap to overcompensate for its weak design.

You would think, since the very concept of Desperate Struggle is one where you fight oddball assassins, that the devs should have removed typical stage flow in favor of boss fights. But, just like removing city travel, removing whole stages mean you would get to the bad stuff even quicker; the boss fights suck. They're either a basic fight against an enemy with a huge health bar, a basic fight with an intentionally stupid gimmick for the sake of a joke, or a basic fight with a gimmick that sounds cool... but isn't fleshed out past the "sounds cool" part.

One "sounds cool" moment happens with the stage two battle: a mecha fight where Travis summons an Evangelion-style robot to fight against something ripped from Gurren Lagann. Then you take control... and the only solution to victory is to jump over easily-avoidable laser beams. Another "sounds cool" confrontation occurs when you fight against a contraption with a brain, and its main attack is to slam the ground so hard that surfaces rise up like pillars. You have to run towards certain surfaces that don't rise to avoid injury. And... that's it. That's the fight. You noticing something here? Not only do these fights have poorly-executed attack patterns, but they don't have layers or "phases" to them; you get that ONE idea and that's apparently enough for the devs. Every other non-gimmicky boss encounter is a straightforward bout where the main strategy is to do generic circle-strafes. 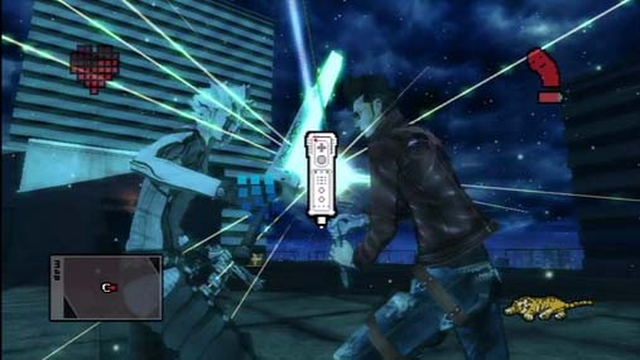 Desperate Struggle is infuriating because it gives you hope and immediately snatches it away. You're led to believe improvements have been made starting with the elimination of one awful aspect, but then that's really all that happens. You're then expected to play another full game featuring dreadfully boring and repetitive fights with the absolute minimalist of variation which extends into boss battles. Instead of anticipating what the next stage and ranked assassin fight could possibly be, you're actually hoping that the game pushes you closer and closer to the number one ranked fight so that this nightmare can end.

Sequels usually improve or, at the very least, offer something refreshing to the fray; Desperate Struggle does neither, and in many ways, that makes it worse than its predecessor since this is a literal repeat. It just stubbornly sticks to the flawed blueprint of the original, which is amazing in itself. Why? Because there's something to be said about a particular structure that even when you remove one or two badly-designed elements as a way to "refine" the template, you still end up with a terrible game.
1.5/5

If you enjoyed this No More Heroes 2: Desperate Struggle review, you're encouraged to discuss it with the author and with other members of the site's community. If you don't already have an HonestGamers account, you can sign up for one in a snap. Thank you for reading!

© 1998-2020 HonestGamers
None of the material contained within this site may be reproduced in any conceivable fashion without permission from the author(s) of said material. This site is not sponsored or endorsed by Nintendo, Sega, Sony, Microsoft, or any other such party. No More Heroes 2: Desperate Struggle is a registered trademark of its copyright holder. This site makes no claim to No More Heroes 2: Desperate Struggle, its characters, screenshots, artwork, music, or any intellectual property contained within. Opinions expressed on this site do not necessarily represent the opinion of site staff or sponsors. Staff and freelance reviews are typically written based on time spent with a retail review copy or review key for the game that is provided by its publisher.