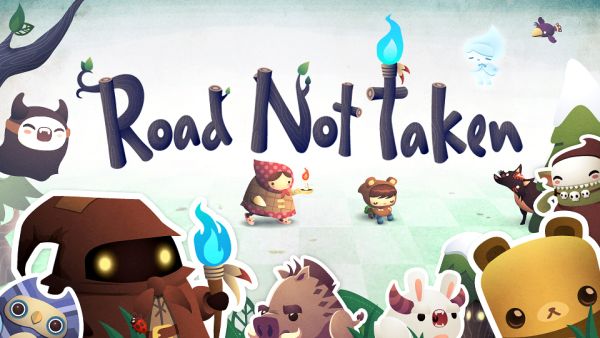 Stage four of Road Not Taken was the first to give me trouble. Regardless of the effort I put into recovering the hub town's lost children from the frosty labyrinth, the trials therein were too much for me to handle. After several attempts, though, I completed the stage with little difficulty. You might think my perseverance had honed my abilities and that I had overcome the maze's obstacles via superior gaming skill, when in actuality luck was on my side. As it turns out, everything in Road Not Taken is procedurally generated, from the impediments you face to the positions and quantities of missing kids, various foes, and friendly stimuli. In other words, if at first you don't succeed, then just respawn until everything falls into place.

In a way, Road Not Taken's core concept is pretty neat. No two levels (called "years") are alike, and the only factor to distinguish one from another is the presence of particular objects in the woods. Early stages, for instance, tend to keep things simple by presenting you with basic fixtures. You might find a few moveable trees and flowers, maybe some benign bears or honey bees at worst. Later years introduce vicious wolves, bulky bushes, panda statues that stick to other items, and even wicked spirits that either drain some of your energy or abscond with separated youngsters they happen to collide with. 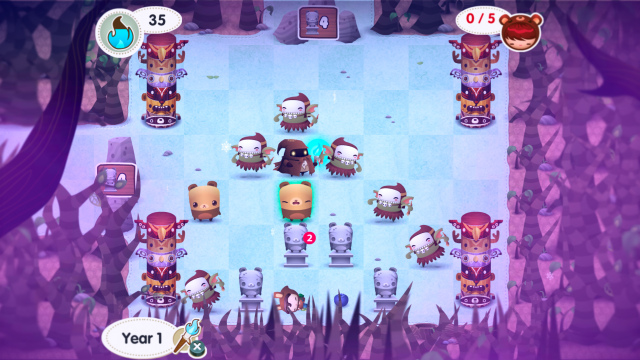 Despite the game's nasty rogues gallery, Road Not Taken is combat-free. Advancing through each maze is instead a matter of lifting objects and creatures and tossing them, which you accomplish by standing next to them and utilizing your magical staff. Sadly, you can't throw the flora and fauna you elevate in any direction. If, for example, you raise a tree that's sitting north of the protagonist, then you can only launch it that way. In other words, you need to consider your position in relation to a hoistable sprite before heaving it, not to mention where it's currently sitting on the screen. To make matters worse, walking with a boosted mass drains your energy one point per step unless there's a campfire or sunlight in your vicinity, which is fairly uncommon. Thankfully, you can regain health points by eating a morsel, should one appear, or by reuniting a tot with a parent.

Appearance is not the only thing that separates one object from another, as they each possesses their own unique features and properties. Take the red spirits, for starters. If you place three of them consecutively, they'll transform into a single axe. Hurling the axe at a tree makes timber, which you can then lob at another piece of wood to make a campfire. Some stimuli also have irksome rules. Tossing a mole next to another item, for instance, causes the mammal and that sprite to switch places. The worst is when you run afoul of adversaries like crows or "daemon bunnae" (devilish rabbits), which will not only damage you but also teleport you to a random room. 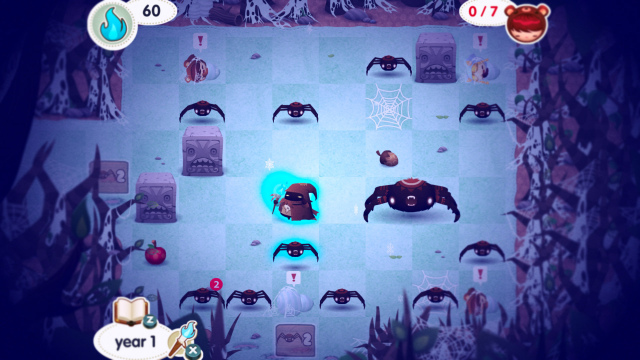 Chucking miscellany is necessary because you need to gather various numbers of identical items in order to unlock clearings in the forest. For instance, you might spot a roadblock that demands three moles or four blooming flowers before allowing you to pass. That could require you to scour other rooms in order to locate the necessary goods to fulfill the request, which can be complicated at times. In some cases, you might have to reorganize whole regions just to be able to relocate a needed gizmo, all while attempting to consume as little energy as possible. This is when the game can be the most rewarding because it gets the gears in your head turning. You might find yourself traversing multiple chambers, plotting the safest and most effective route while taking into account any constraints or woes along the way. Let me tell you, there's nothing like witnessing a master strategy pay off. It's wonderful to transport a boulder across several areas and properly evade harm, and then clear a barricade and collect a tyke or two.

Unfortunately, this is also where the game can be the most frustrating. Now and then you'll receive a dungeon layout that's convoluted enough to cause a migraine. You might have to, say, transfer four ice blocks from the farthest corners of the stage, all of which lie behind seas of obstructions. What's worse is when you have to traipse through certain locales designed to wear you down, such as territories terrorized by blizzards. Configurations like these usually lead to quick deaths and bulging veins on your forehead, all for nothing...

You see, Road Not Taken's difficulty rating is actually quite phony, mostly because of the game's procedurally generated nature. As noted previously, everything you encounter in a stage is random, from the placement and quantity of each dungeon's moveable pieces to the number of children you must recover. I've had my share of face-breaking arrangements where I had to retrieve eight young 'uns, none of whom I could so much as contact without croaking. After respawning a time or two, I usually received a level starring only five brats and with most of the objects I needed to clear a barrier within spitting distance of one another. Progressing through the campaign is more of a matter of luck than anything. Sure, you could show off your impressive sorting skills, but why bother undergoing such an exasperating task when you can wait for a breezier structure? To put things into perspective, one of the layouts the game provided for me required six rescues, three of which were in one freakin' room, no more than three chambers away from the maze entrance. 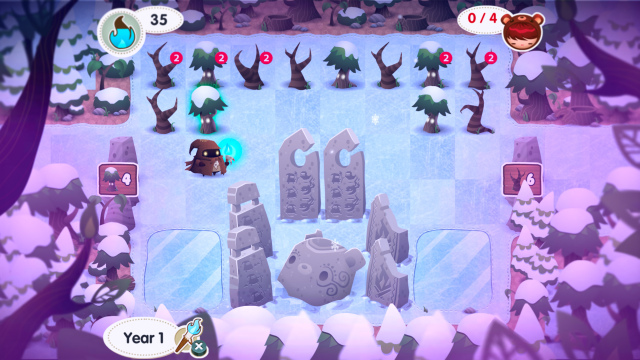 Thankfully, there are other factors that Road Not Taken showcases that aren't totally eclipsed by its irritating use of randomness. For starters, its art style is gorgeously cartoony and adorable. Hell, even the evil spirits you occasionally face are kind of cute. I also appreciated the game's usage of NPCs, who do more than spout useless pointers. Swapping collectibles like rice or money builds friendships with the natives, which grants you perks such as accessories, which bestow bonuses (e.g. devouring honey restores more energy, etc.). You can also collect replicas of items from the labyrinth and select two of them to permanently ban, which is great of eliminating a couple of pet peeves you might have.

Despite a few strengths, I'm not entirely sold on Road Not Taken. Its roguelike elements harm it more than bolster it, mostly because it renders any instances of a steep challenge factor unnecessary. Why bother trying to endure a stiff trial when you can hold out for a less stressful presentation? If you can look past this fault, then you might be able to enjoy the game. Personally, I found it to be a letdown.
2.5/5

If you enjoyed this Road Not Taken review, you're encouraged to discuss it with the author and with other members of the site's community. If you don't already have an HonestGamers account, you can sign up for one in a snap. Thank you for reading!

© 1998-2020 HonestGamers
None of the material contained within this site may be reproduced in any conceivable fashion without permission from the author(s) of said material. This site is not sponsored or endorsed by Nintendo, Sega, Sony, Microsoft, or any other such party. Road Not Taken is a registered trademark of its copyright holder. This site makes no claim to Road Not Taken, its characters, screenshots, artwork, music, or any intellectual property contained within. Opinions expressed on this site do not necessarily represent the opinion of site staff or sponsors. Staff and freelance reviews are typically written based on time spent with a retail review copy or review key for the game that is provided by its publisher.