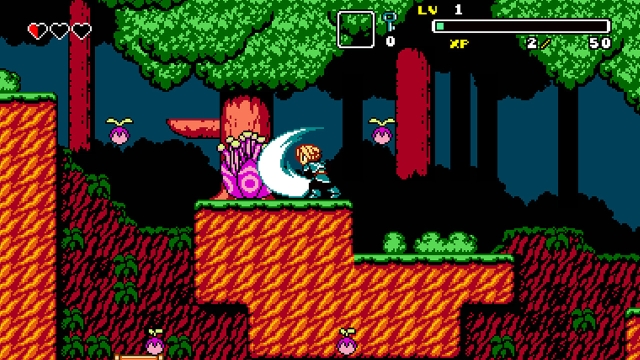 I feel awkward talking up the umpteenth high-fantasy Metroid clone. The sub-genre has become so crowded that all of its entries run together anymore, and none of them has any right to be even better than average. They all retread a lot of the same concepts and qualities, and by this point only the category diehards should apply. At the same time, though, I'm not going to devalue a game like Aggelos just because its developer, LookAtMyGame, understood the assignment and played to the genre's strengths despite a lack of innovation.

I mean, the campaign even starts out in all too familiar fashion. You exit your house because something beckons you towards the woods. There, you find your everyday damsel about to be snatched by a goblin. You scotch the little bastard and rescue the maiden, and of course she turns out to be a princess. No one cares about peasants in peril, apparently. After a chat with her father, he sends you on a quest that revolves around securing magical powers based on the four elements. Boy, this sounds like the kind of trip I've been on at least four thousand times...

Your silent protagonist embarks with little more than a crummy dagger and some nearly useless armor, no skills, and no magical abilities. However, you know exactly how this affair is going to shape up: he's going to bump into a roadblock of some kind, our hero will eventually gain some awesome power that allows him to overcome the barrier, he'll advance further, nab some additional neat equipment, and start the whole process over again until he's dripping with talent and tight weaponry. For instance, early on you reach a lofty ledge surrounded by numerous will-o'-the-wisps. You don't know it yet, but you'll eventually secure a magical projectile that transforms those balls of light (as well as other foes) into handy platforms, thereby allowing you to ascend in particular places. 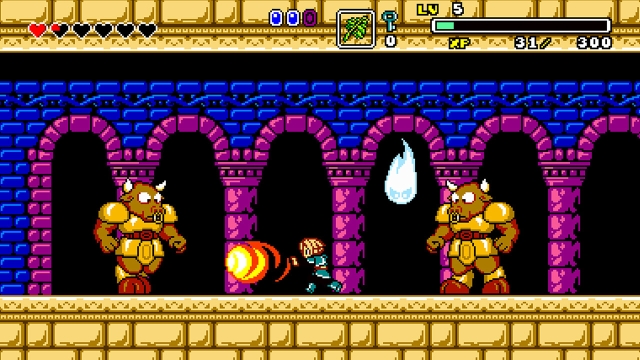 Every game of this sort loads you up with the usual suspects in regards to special abilities. You know you're going to learn a spell that breaks certain blocks, master a double-jump, and obtain a dash maneuver. This one takes care to add new spins to the techniques you acquire by giving them various uses. For instance, you can shoot a fireball that breaks ice chunks, but also tears the fabric of time and space to create portals. The double-jump this time around isn't merely a hop followed by a second hop. Instead, the second aerial leap is an upward sword thrust that damages opponents while also giving your vertical flight a little boost. On top of that, it arcs upward in a particular pattern, forcing you to carefully consider your position in relation to the environment so that you don't overshoot a target or land awkwardly. Ultimately, you end up mainly utilizing the this talent when it's actually needed rather than mindlessly using it any time you leave the ground, as you might in any other Metroidvania. Plus, it doesn't render your standard, unaided jump obsolete, as there are plenty of segments where double-jumping proves to be more of a liability than an asset.

As with any good pathfinder, Aggelos offers plenty of rewarding exploration. For starters, your travels take you to numerous towns with shops that provide upgraded equipment, as well as NPCs with actually helpful info to impart. Townsfolk drop hints regarding the use of various event items or methods for accessing the next dungeon. Outside of the tiny burgs you visit lie caves, crannies, and environs that house tucked away treasure chests or special rooms. For instance, you'll enter a tree in one forested dead end that hides a pink monkey. At first, the little guy only speaks gibberish, but after acquiring a special tome, you'll find he's part of a long quest line that eventually earns you the best equipment.

Event items play a huge part in this adventure. The first time you encounter that monkey, you think nothing of him. However, a palace guard relates to you his experiences with a simian stealing the princess' pendant, which makes the translation guide you saw in a another town's store more tantalizing. That realization prompts you to grind for cash, snag the book, speak with the primate, and realize all he wants is some bananas. You know, just like the ones you saw dangling from a tree at another point in the forest. So you snatch the fruit, give it to the critter, get back the pendant, exchange it for a tiara, then take that to a collector who hands over a stone that happens to fit into a locked door. No, this door doesn't directly lead you to the "best equipment" I mentioned earlier. It's just another step in an even longer list of gift exchanges that eventually leads to a badass boss encounter and a sword that all but breaks the game. 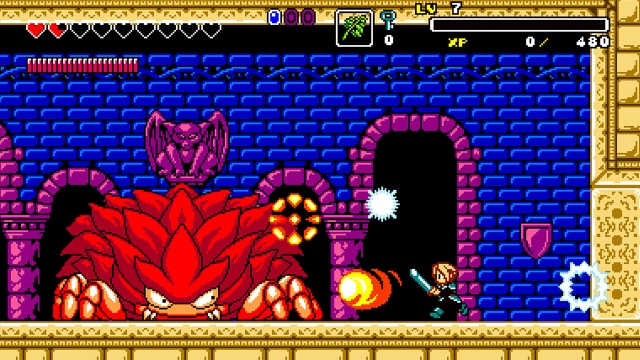 I say "all but" because despite it's relatively relaxed difficulty rating, Aggelos succeeds. Mostly, it accomplishes this feat with a well-built world that's neither too complex nor overly basic. Dungeons make the full use of their real estate, packing a variety of challenges that range from engaging combat gauntlets against tough foes to puzzles that require magic and timing. You might occasionally need to fire a couple of different projectiles at out-of-reach switches, then hit a third switch with your sword right when those bullets connect with their targets, all to open a door. Another maze concerns mirrors that teleport you to other parts of the construct, all eventually leading to pressure plates that must be pressed in a particular order.

The thing is there's little wasted space here. This isn't like Metroid II, where you spend ages creeping down a long corridor to find nothing. Every pathway proves useful, serving as either a newly found shortcut or a passage to a box full of gems or a heart container. Aggelos' design also makes backtracking easier and more enjoyable. Not only does the campaign provide fast traveling via save points, but most routes that require new skills aren't far out of the way. You don't need to launch a full expedition after you receive the obligatory double-jump to to find out what an out-of-reach chest was holding. You can easily return to that spot, sate your curiosity, and be on your way.

It's funny that every time I declare that I'm burnt out on pathfinders, I stumble upon another one that successfully whiles away the hours. Aggelos may not bring much new content to the Metroid table, but at this point you have to expect that from any game that looks like it was produced in the early '90s. In other words, developer LookAtMyGame pretty much knew what their audience wanted and provided that experience without many tweaks. Games like this prove that 8- and 16-bit sensibilities aren't just back, they're here to stay.

If you enjoyed this Aggelos review, you're encouraged to discuss it with the author and with other members of the site's community. If you don't already have an HonestGamers account, you can sign up for one in a snap. Thank you for reading!

© 1998 - 2022 HonestGamers
None of the material contained within this site may be reproduced in any conceivable fashion without permission from the author(s) of said material. This site is not sponsored or endorsed by Nintendo, Sega, Sony, Microsoft, or any other such party. Aggelos is a registered trademark of its copyright holder. This site makes no claim to Aggelos, its characters, screenshots, artwork, music, or any intellectual property contained within. Opinions expressed on this site do not necessarily represent the opinion of site staff or sponsors. Staff and freelance reviews are typically written based on time spent with a retail review copy or review key for the game that is provided by its publisher.